A few quick bits from the North teams' practice on Tuesday morning at the Senior Bowl in Mobile, Alabama. Read live updates from BJ's Twitter feed here and read all of his Senior Bowl work here. Tuesday's report on the South team is here.

The North squad practice here in Mobile had a different look to it on Tuesday afternoon than it did on Monday. Yesterday the two teams practiced at separate facilities and their practices overlapped for an hour. Therefore the number of scouts, NFL personnel people, coaches and media were split into two different areas.

Tuesday was a little bit more crowded for this reason.

I’m pretty sure I saw every national NFL writer and analyst that you can think of along the sidelines. It’s a crazy scene to walk down the sidelines with agents, personnel members, media and coaches all lined up watching these guys go through drills. 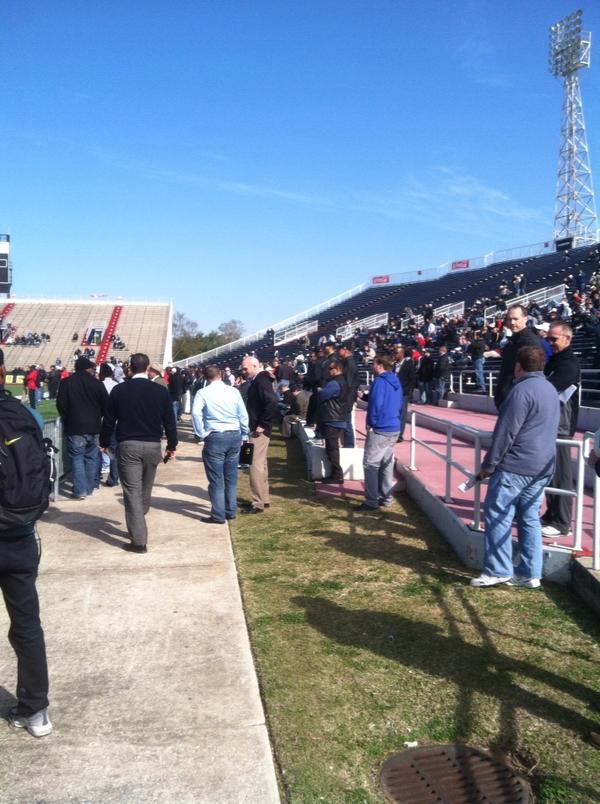 Those that stood out, both good and bad

I spent a fair amount of time watching drills between the linebackers/safeties and running backs along with the usual 7-on-7 with quarterbacks and wide receivers.

On the offensive side of the ball two players stood out to me in this drill. Running back Robbie Rouse struggled in this pass protection drill, badly. They were basically asked to take on a blitzing defender and keep him from touching the coach (quarterback). Rouse looked slow to adjust to the different moves he was getting and even got bull-rushed and driven back a couple of times.

On the positive side Oregon running back Kenjon Barner stood out in this drill. He looked quick, anchored well in protection and consistently locked up his man and stayed with him throughout the drill. As a back that’s known for his speed, his ability to do well in pass-protection could be his meal ticket to the NFL and getting on the field, or staying on the field on third downs.

In that same drill I saw North Carolina LB Kevin Reddick have his way with any running back trying to stop him from getting to the coach (QB). He was not stopped and looked very impressive using several different pass-rush moves. Safeties’ TJ McDonald and Jonathan Cyprien continued their good week and stood out in this drill as well.

Related: Read more on McDonald and Cyprien from the day one practice report

A couple of players that didn’t have great days were Texas WR Marquise Goodwin and Boise State CB Jamar Taylor. Goodwin had at least two big drops that I saw and didn’t build on the momentum he had after a solid day yesterday. One of the drops came in 7 on 7 on a basic out-route in which Zac Dysert put it right in his chest. The second play came on a square-in across the middle in which he looked awkward trying to let the ball get into his chest rather than catch it with his hands.

Taylor was beat badly on a fly-route from Michigan WR Denard Robinson on a deep touchdown pass from Mike Glennon early in 7 on 7 drills. And then later in team drills he slipped and fell in coverage as Oregon State WR Markus Wheaton had beat him to the edge on a play near the sidelines.

Robinson continues to be up and down as he continues his switch to wide receiver from the quarterback position. Although some say that it looks like a smoother transition for Robinson than it has been for some other players in the past. He’s still wearing the yellow jersey (for QB’s) and nobody knows why.

If there was a winner from the quarterbacks group on the day for the North squad it would have to be Mike Glennon. He threw three perfect fly routes that all went for TD’s (Two in 7 on 7 and one in team drills). They were right on the money and perfectly timed throws.

Zac Dysert struggled today. His passes consistently sailed on him and I’ve heard from a few people that they aren’t thrilled with the way the ball consistently comes out of his hand. Always seems to be a fair amount of ‘wobble’ on each of his throws, even the accurate ones.

Nassib checked down an awful lot during 7 on 7 drills. He didn’t seem to want to try and force any throws down the field and it wasn’t until his last pass of the day that he attempted to fit a ball into a tight window. It was a seam route to TE Doyle that he threaded between the linebacker and safety for what was easily his best throw in Mobile so far. 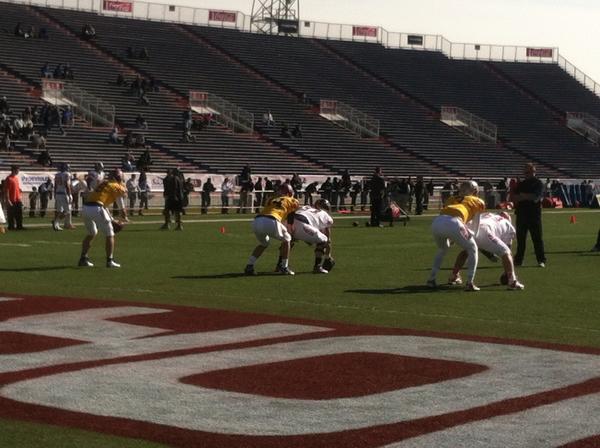 I tried to keep an eye on Colorado TE Nick Kasa during practice because I saw one the Chiefs personnel guys talking with him after practice on Monday. He impressed with a couple of nice catches that he had to extend for and ESPN Radio in Denver’s Cecil Lammey had a lot of very positive things to say about Kasa. He is very familiar with him and likes his overall game along with his character and makeup as a person.

That’s all I’ve got for the North practice but I’d say good days’ for Kenjon Barner, Mike Glennon, Kevin Reddick and TJ McDonald. I’d say poor days from Robbie Rouse, Jamari Taylor and Marquise Goodwin. I’m going to try and spend some time around the defensive lineman during individual work during the North practice tomorrow.