BJ Kissel at the 2013 Senior Bowl in Mobile, Alabama where he caught up with Tyler Wilson, the former Arkansas QB. BJ was impressed with Wilson off the field. Read on for BJ's convo with Wilson and click here to read all of BJ's Senior Bowl reports.

Share All sharing options for: Tyler Wilson says playing for the Chiefs would be a 'dream come true'

I agree with any and all assessments talking-up Tyler Wilson's interviewing ability. He was by FAR the best interview I had during media night. The answers did not seem scripted. He came across genuine and had a way about him that made you truly believe what he was saying. This wasn't a snake-oil salesman type-way either. He just had a way of engaging those he spoke with and after speaking with almost 10 people that had interviewed him that night or in the past before, we all agreed that he came across the way you want your quarterback to come across.

Related: THE case for Tyler Wilson in KC | The case for Geno

I spoke with Wilson on how tough it is to come into a situation where you're being judged by the most powerful decision-makers in the NFL by throwing to guys you've just met within the last 24 hours in a lot of cases.

"I think they all understand that it's just part of the process. I think it's part of it for a reason because they're trying to see if guys get flustered by it and don't do so well and how they handle it", said Wilson. "You're obviously digesting a new offense within just a few days and how you pick that up...they throw a lot of different stuff at you just to see how you handle it."

Asked about his time at Arkansas, Wilson said:

"It gave me the opportunity to display my leadership ability and ways to get guys to play around you when things aren't in a perfect environment. I can say that I came to work everyday and busted my tail and I can say I'm proud of that."

Saving the best for last, which is the money quote:

"Living in Arkansas there are three teams to migrate to and that's the St. Louis Rams, Dallas Cowboys or the Kansas City Chiefs. Going to a team like Kansas City would be a dream come true. Being able to play close to home and be around a fan base that I grew up around would be special."

Which one of these two is a future NFL QB? (Hint: that's me on the right) 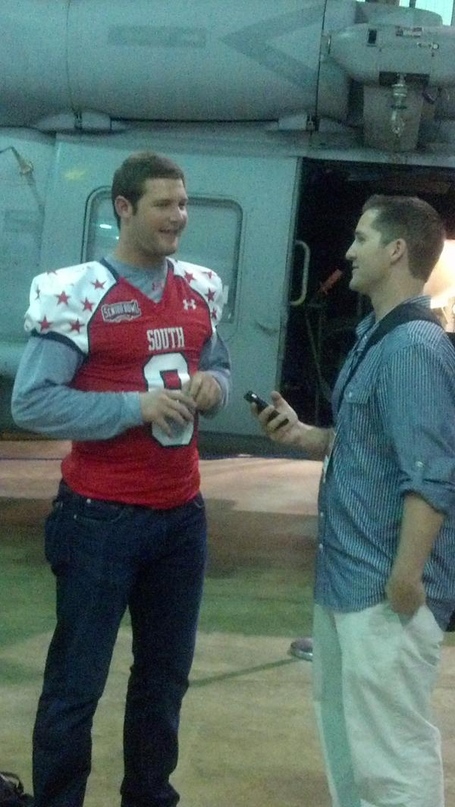 H/T @JinxAllessio for the picture

Who to watch at the Senior Bowl

The weigh-ins (with sortable table)

Recap of day one