For Chiefs fans, the Senior Bowl is an opportunity to get to know the 2013 quarterback class. BJ Kissel is in Mobile, Alabama where he talked to three of the six quarterbacks in attendance. Will one of these guys be a future Chief?

I spent almost all of Monday afternoon's practice watching the quarterbacks and wide receivers on the North team. Considering it was the first day of practice at the Senior Bowl down here in Mobile you weren't going to see a whole lot of flash from these guys. The majority of the first part of practice had the quarterbacks working on taking snaps and handing the ball off to the running backs. That wasn't going to give you a great idea of how the three North quarterbacks could separate themselves this week.

While the quarterbacks did eventually throw they're just throwing basic routes against basic defenses to players they have never thrown to ball to in their careers. Many of the personnel people around the stadium were giving it the 'Let's see on Wednesday' in regards to the timing and rhythm of the quarterbacks and wide receivers. Give it a couple days.

Each quarterback on the North team threw an interception during 11 on 11 drills. None of the quarterbacks really stood out as head and shoulders better than the other guys.

After practice we went to media night, which looked like this: 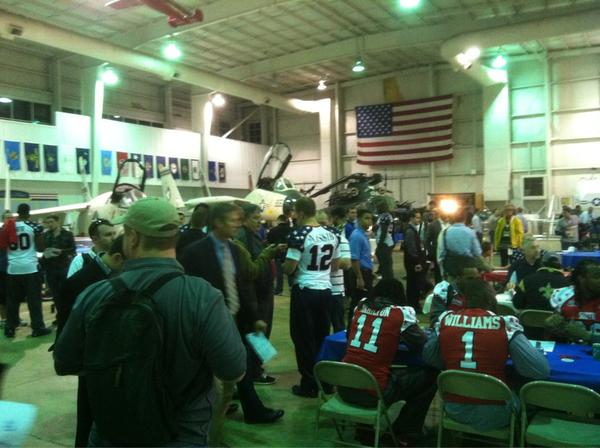 Read about my conversation with Tyler Wilson here.

I asked him if there was any added pressure in possibly coming into a situation like Kansas City where there's a big need at QB and the recent success of players like Russel Wilson, Robert Griffin III and Andrew Luck could make for lofty expectations.

"I thrive under pressure. I think pressure is a good thing. It pushes you a little bit more and it challenges you."

Asked about getting outside the pocket to make plays (something he did often at Miami-OH): "I do like trying to make plays with my feet and as my career went on I tried to just extend the play a little longer and instead of just making those runs try and stay behind the LOS and make a play with my arm. When plays break down that's what I pride myself on and that's kind of what I love, you never know what's coming and that kind of anxiety or that thrill, I love it."

I asked him if he was tired of the Ben Roethlisberger questions/comparisons (and that even if he was he's still going to get more of them over the next few months). 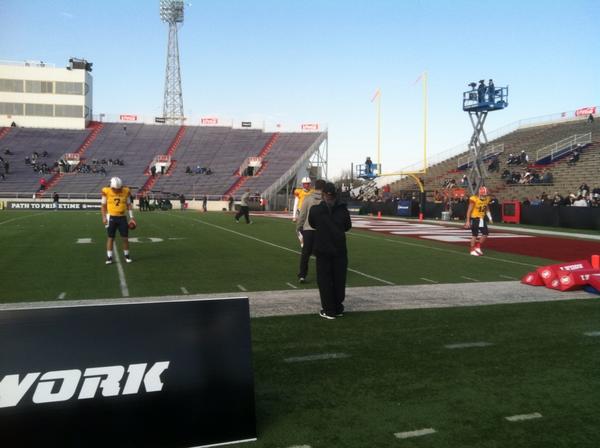 On the added pressure the 2012 draft class's success brings: "Obviously those rookies had great seasons, but every player is different. Obviously I'd love to go in there and be as successful as those guys and I'd love to work to do that. But I don't think they'll be added pressure. I can only control what I can control. I've had to deal with that before with Russel so it wouldn't be the first time and I think I handled that pretty well back then."

I asked him what his favorite plays was and I should have known the answer. Zac Dysert said the 'smash' concept. A hitch-corner route combination in which the quarterback reads the CB with two WRs to one side. If the CB plays back he throws the hitch and if he comes up and presses he throws the corner route.

"I love throwing four verticals, getting the ball down-field," Glennon said. "Hitting the post if it's there".

On developing chemistry with the WR's here at the Senior Bowl this week: "It's difficult at first but I'm sure as the week goes on we'll develop some more chemistry and understand each other a little better. Of course the first day isn't going to be as pretty as it should be by Friday or Saturday."

Mike Glennon, Ryan Nassib and Zac Dysert take the field for the North team on Monday from 9:30-11:30 am. EJ Manuel, Landry Jones and Tyler Wilson and the South team take the field from 1:30-3:30pm. I'll be at both practices and tweeting out as much as I possibly can from @bkissel7.