Andy Reid to the Chiefs? 3 questions about the future in Kansas City

The latest KC Chiefs coaching search has us landing in Philly, where a contingent of Chiefs personnel is interviewing Andy Reid, who was fired by the Eagles on Monday. Jason from Bleeding Green Nation answers our questions on what the Reid era could look like in KC.

Share All sharing options for: Andy Reid to the Chiefs? 3 questions about the future in Kansas City

The Kansas City Chiefs coaching search started in Atlanta with Falcons offensive coordinator Dirk Koetter, who has since re-upped with the Falcons. The next step in the search will take place in Philadelphia, where the Chiefs are meeting with Andy Reid, who was fired after 14 years on Monday.

So, how about Reid in Kansas City? I talked with Jason over at Bleeding Green Nation for the scoop on Reid, and what he might look like in red and gold.

1. Do you think Andy Reid could be successful with another team?

"Sure, Andy Reid certainly lost his way here (more on that in question 3), but given his track record of success I can certainly see him doing well after a fresh start. Assuming he hasn't permanently lost the ability to evaluate talent or select coaches (at one time he was good at that) I think the fact that he won't be desperately title-chasing anymore will help. Hopefully he can get back to the core principles that led to his early success in Philadelphia." 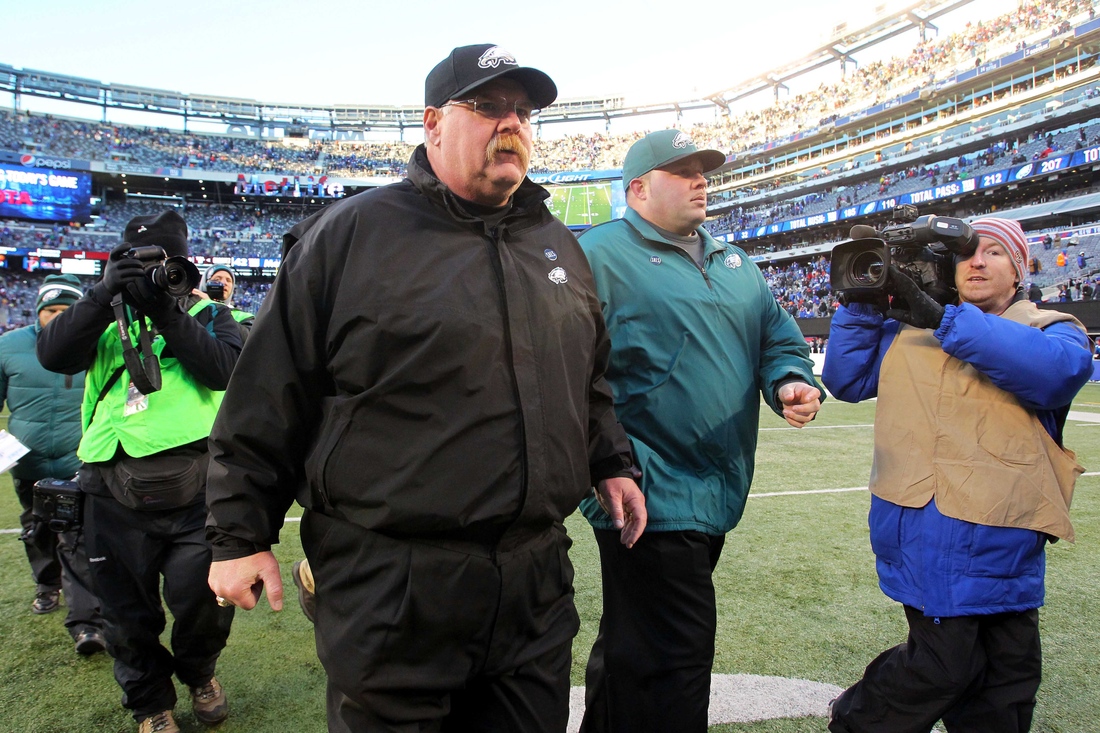 2. The Chiefs have the No. 1 pick and need a new quarterback. How would you assess Reid's ability to not only choose the right quarterback, but also develop him?

"That's probably a more complicated question than it seems. As much as he always called a "QB guru," in reality Reid has only done what you're asking once. He picked Donovan McNabb in 1999 and developed him into a star QB. He hasn't done that again. Part of that is that he hasn't had to because the vast majority of his time here McNabb was set as the starter. However, in recent seasons he's taken guys like Kevin Kolb, Mike Kafka & Nick Foles. Obviously who knows what Foles will be, but his other picks have not developed into franchise QBs.

"Of course, they weren't No. 2 overall picks either. And that's really always been the big question with Reid/McNabb. Did Andy make McNabb or was it the other way around? If you look back at that 1999 draft, five QBs went in the first 12 picks and McNabb was easily the best of the bunch. The only other one that even had any kind of career was Daunte Culpepper. So did Andy just get lucky taking McNabb that year? Or if he took Akili Smith, would it have been Smith who made Pro Bowls and led the Eagles to four NFC title games? It's really hard to say.

"Beyond the draft picks, Andy has been successful with QBs in little spurts. We saw Jeff Garcia come in here and make a playoff run. Michael Vick's 2010 season. When McNabb got hurt in 2002, AJ Feeley was able to win 4 games to keep them in playoff contention. Kevin Kolb won a couple of games...

"The reality is though, he's only picked and developed one QB to any type of sustained success. He has, however, suckered three different teams into surrendering second round picks for former QBs of his that never did anything afterward..." 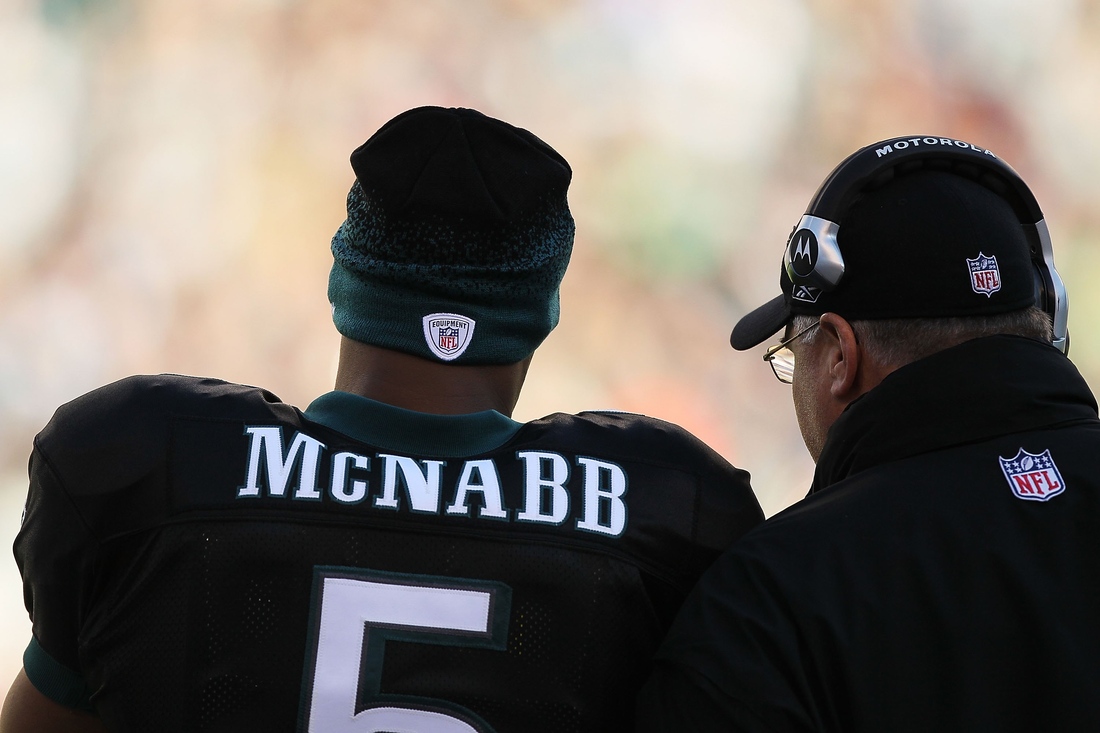 3. What were some of the downfalls of Reid in the last few years in Philly? Was he fired for any reason other than the fact he'd been there a long time?

"He was fired because he's been a failure at absolutely every level in these past couple of years. Obviously we can look at Reid's resume and see that overall he did a very good job in Philadelphia. He's experienced a lot of success and helped build this team into a real contender in the mid 2000s.

"That makes his performance over the past two seasons all the more shocking. He has had final say and presided over a run of disastrous drafts, something noted even by the owner when discussing his firing. He's abandoned his principles of building through the draft in favor of free agency quick faces and chasing big names. Again, this was something pointed out by owner Jeff Lurie as part of the season. He called Reid's decision making "scattered" in recent seasons and he's right. There's been no clear plan whatsoever.

"He's not only been unable to replace the assistant coaching drain that success in the NFL brings, the guys he has chosen have been huge negatives and highlighted his utter failure as a manager these past couple seasons.

"Take Juan Castillo for example. Castillo has been Reid's most loyal assistant for his entire tenure here and did a great job as an offensive line coach for well over a decade. Reid makes the decision to promote him to defensive coordinator last season. If that was not an odd enough move in the first place, he actually hired defensive line coach Jim Washburn prior to promoting Castillo. So now now Juan takes over a defense that is going to be totally dictated by Washburn's wide 9 schemes and has no choice but to try and work around it.

"Now that would be bad enough is Washburn wasn't also a complete and total douche who had no respect for Castillo and could care less about the rest of the defense. I'll excerpt a piece from a local reporter named Reuben Frank:

Washburn operated apart from Castillo, running his own little defensive line fiefdom and often either ignoring Castillo or derisively calling him "Juanita" in front of his players, the veteran defensive player said. He was condescending and confrontational and embarrassed Castillo numerous times in meetings and at practice.

Jason Babin was all about compiling sacks, never about winning, never about being part of a team, and it turns out Washburn was exactly the same. No coincidence they were dismissed less than a week apart.

"Reid allowed this to happen. I don't care if you're running a convenience store, a manager should not allow that to happen. What's worse, he fires Castillo 6 games into this season when the defense was actually playing decent. They took an absolute nosedive directly after and wouldn't even record an interception until the 2nd to last game of the year. It took him until the season was lost to finally fire Washburn and start to shed the me-first mercenaries like Jason Babin.

"The question is why did he decline so sharply as a coach & manager? In the end, that's going to be up to whoever interviews him to get to the bottom of. There's no doubt that there was pressure on him to finally win and that had to play a part in what drive him to abandon his successful philosophies of the past. Obviously his family issues are well publicized.

"Being perfectly honest, I'm very conflicted about whether I think Reid can still be a good head coach. He once was, but he is most certainly not right now. Maybe a change of scenery and a reset is really what he needs." 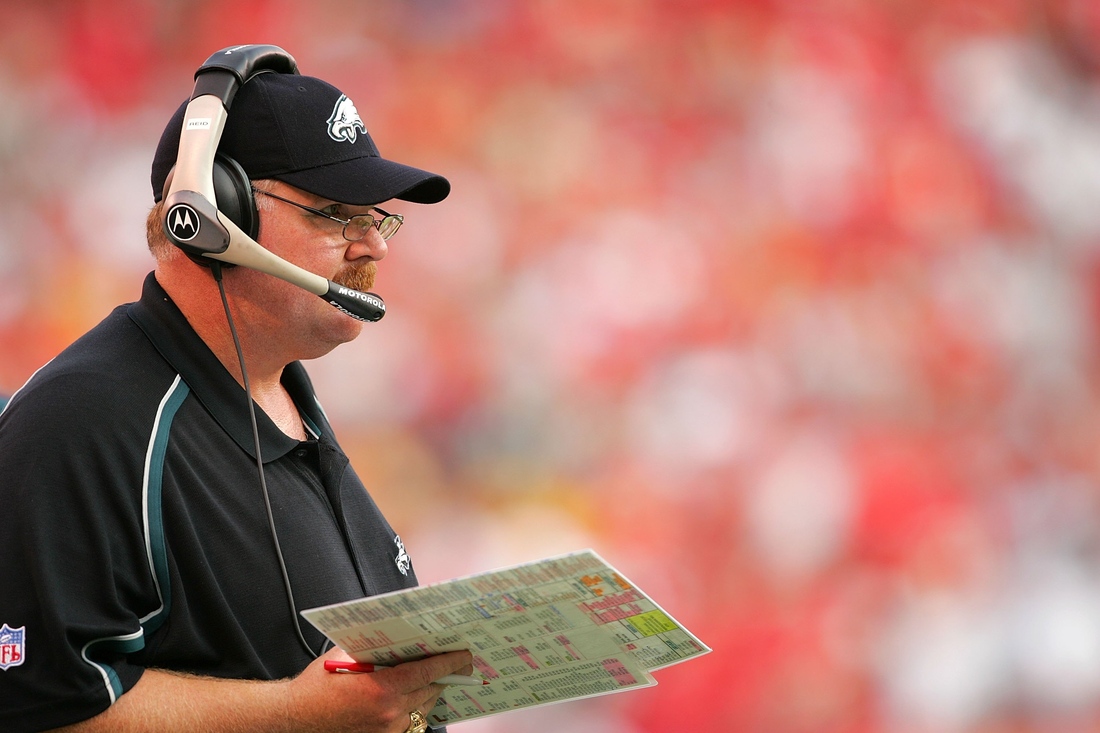