Bob Sutton is a jack of all trades: A brief history

With the news that Bob Sutton is the Chiefs next defensive coordinator, Kalo takes a deeper look at his schemes, successes, and what it means for the Chiefs.

Share All sharing options for: Bob Sutton is a jack of all trades: A brief history

Well, Chiefs fans, Bob Sutton is your new defensive coordinator. For most, this is a very underwhelming move. Chiefs fans were hoping to really get a big name guy to turn the talent on this team around. Unfortunately, with all the head coaching jobs open, solid coordinators were being picked for head coaching jobs, or are still holding out for them.

The Chiefs have their guy, though, so let's take a look at what he's done in his career.

He joined the New York Jets in 2000 as a linebackers coach. At that time, the Jets still had a 3-4 system installed. In that year, he gave outside linebacker Mo Lewis the most opportunities to rush the passer he'd had in his career and sent him to his third consecutive Pro Bowl with 10 sacks and a pick.

For the next four years, the switch to the 4-3 defense was made. It wasn't very successful, and with Mo Lewis declining in ability and the trade of James Farrior, new linebacker Jonathan Vilma was shouldering most of the load. There were two different defensive coordinators during that time -- both retained Sutton as their linebackers coach. When Herm Edwards was traded after the 2005 season to our very own Chiefs, Eric Mangini stepped in as head coach and entrusted Sutton to run the defense after helping Vilma to a Pro Bowl nod the year before.

In 2006, the defense was a 2-gapping 3-4, but with some undersized players. Sutton had taken the Herm's Tampa 2 12th ranked defense and dropped it to 20th due in part to some key losses in Pro Bowlers Ty Law and John Abraham (via trades). The second ranked pass defense dropped to 14th, and the 29th ranked run defense stayed low at 24th. One thing that did improve that year, however, was that the Jets all of the sudden had a top 10 team in points allowed.

The next year, Sutton got some help in the draft. The Jets took CB Darrelle Revis in the first round and LB David Harris in the second round to replace departing LB Jonathan Vilma, who was rumored to hate the switch to the 3-4. The increases in production were marginal, and fans began to doubt whether the team had the personnel to even run the defense that they were putting on the field. NJ.com even wrote an article questioning the decision making:

Nonetheless, Mangini insists he doesn't play the traditional 3-4 defense that requires a 350-pound nose tackle as an anchor. He says he uses an array of different fronts.

"The 3-4 comes in a lot of flavors," defensive coordinator Bob Sutton concurs.

Fact is, the Jets are trying to play the defense with 4-3 personnel. Only former Cowboys defensive end Kenyon Coleman, a fifth-year pro, has extensive experience in the defense. Privately, players are becoming increasingly frustrated by the restrictive nature of the 3-4 scheme.

The article then goes on to address Sutton's lack of creativity or attacking mentality:

The Jets, however, have only one sack and one turnover in three games.

Sutton said opponents have been negating his blitz schemes, in part, by throwing the ball quickly or protecting the quarterback. Screens have also been effective (as evidenced by the game against the Dolphins last week). Mangini added that "there's been consistency with our approach. It hasn't been 'We're only going to blitz (or) we're only going to cover.'"

Needless to say, there wasn't a whole lot of faith in the defense going into 2008. The Jets traded for Calvin Pace to play outside linebacker, giving Sutton another piece of the puzzle. They also went out and grabbed a real nose tackle in Kris Jenkins, who made the Pro Bowl alongside Revis that year. The run defense was top 10 with Jenkins in the middle, but (even with Pro Bowl Revis) the pass defense plummeted to 29th. The Jets missed the playoffs again, and they fired head coach Eric Mangini that year.

Rex Ryan was hired to take over the Jets, and appointed Mike Pettine as the defensive coordinator. Even after running the defense the year before, the Jets kept Sutton on as a linebackers coach and defensive assistant. Making some key additions to the front lines, the defense exploded, ranking first overall in points allowed, total defense, and pass defense, as well as eighth in rush defense. The defense played very well after moving away from a 2-gap defense and becoming 1-gap defenders on the front lines.

In the years to follow, there have been aspects of the game that the team has struggled with, but the defense has always been ranked a top 10 defense, as shown in the chart below: 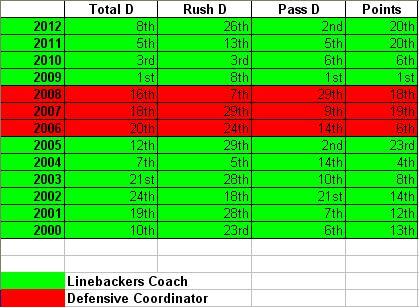 For me, Sutton is a bit of an enigma. He's got experience in the Tampa 2 4-3, a 2-gap 3-4 similar to what the Chiefs are running now, and a 1-gap 3-4. The switch the the Jets made to the 3-4 wasn't initially successful under Sutton, but he also didn't really have the personnel to do it, which is the fault of both Mangini and Sutton. However, the pieces that had been acquired in those three years as defensive coordinator were set up perfectly for Rex Ryan to make an incredible attacking defense.

Throughout several transitions of defensive coordinators and head coaches, Sutton has been retained, which shows how well respected he is amongst NFL coaches. He hasn't really helmed a successful defense, but he's helped various players to some success. He hasn't really built a defense, but there's not a whole lot left to build on this Kansas City team.

He does run a 3-4, which I personally prefer to the 4-3, and he has seen the successes of Ryan's attacking 3-4. One would think that some of that has worked its way into his arsenal, and one would hope that his varied background could lead to some variants to maximize player potential. At the very least, I don't think he can "mess up the defense". Here's to hoping he can make it better.