Is Matt Nagy the new QBs coach for the Kansas City Chiefs?

Some internet sleuthing from Nick Jacobs of Time Warner Cable Metro Sports suggests Matt Nagy will be the Chiefs next quarterbacks coach.

Share All sharing options for: Is Matt Nagy the new QBs coach for the Kansas City Chiefs?

Andy Reid's quarterbacks coach in Philadelphia, Doug Pederson, will reportedly be the Kansas City Chiefs next offensive coordinator. The Chiefs haven't confirmed that but several reports are starting that's the case.

So, who will be the Chiefs quarterbacks coach? Nick Jacobs had some fine sleuthing skills and found this on the website for the Pro Star Coaching agency: 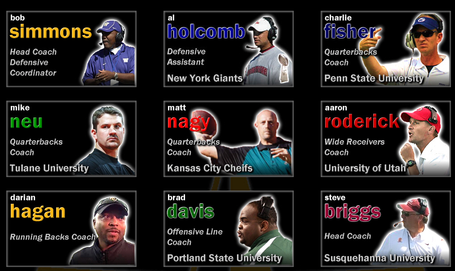 Well, whaddya know. That certainly looks like Matt Nagy is set to be named the Chiefs quarterbacks coach.

(Note to self: I before E except after C.)

Nagy's name has been thrown around for a while. For example, this is from January 4:

So ... safe bet to say we'll hear an announcement on Nagy sometime soon?

Brad Childress visiting KC, but not for OC job