Thanks to six turnovers, the Chiefs squandered an opportunity to share first place and lost to the Chargers, 37-20.

Share All sharing options for: Chargers vs. Chiefs final score: KC fumbles away an opportunity, loses 37-20

The scoreboard will say the San Diego Chargers beat the Kansas City Chiefs but it was really the Chiefs who beat the Chiefs. KC turned it over six times yet somehow only lost by 17 points. The final score in this game: 37-20 in favor of the Chargers.

For the second time this season, the Chiefs have been embarrassed at home. They're 1-3 on the season.

Bill Leavy your white hat for #Chiefs vs #Chargers. #realref

The refs were CHEERED by the Chiefs today. At the coin toss, Leavy said, "Welcome captains. It's great to be back with you today." And the fans went wild. 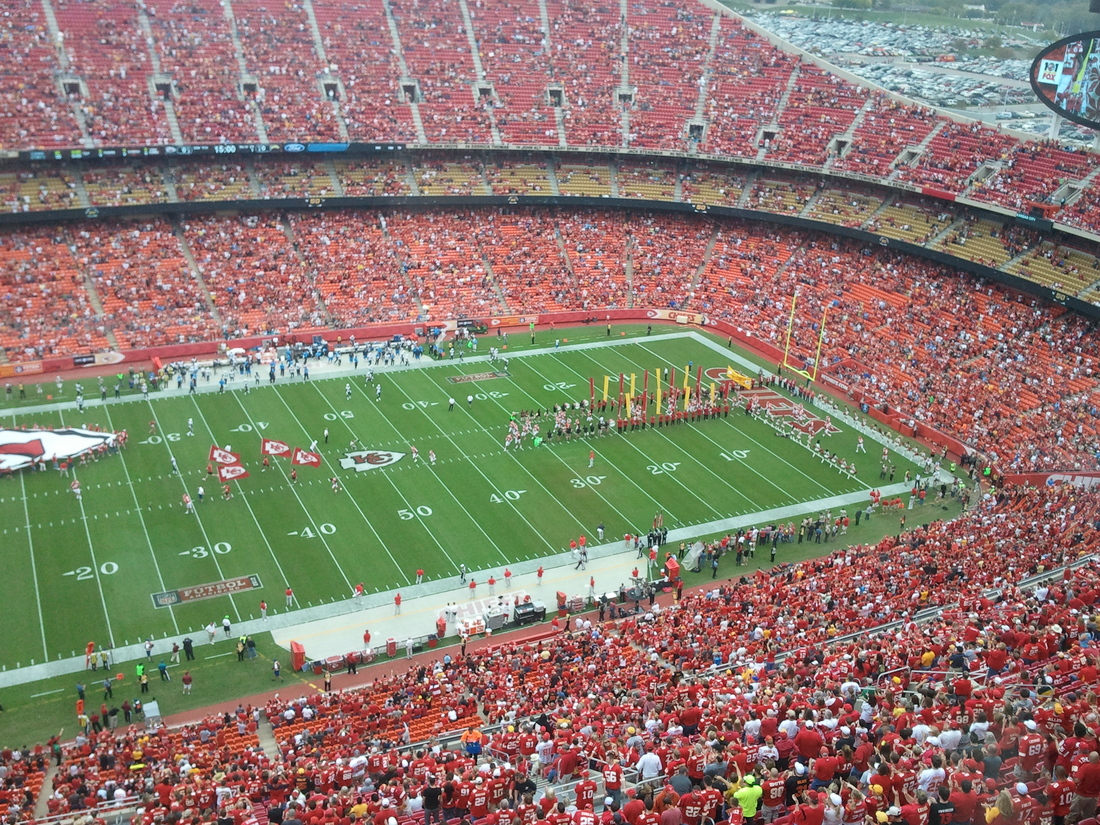 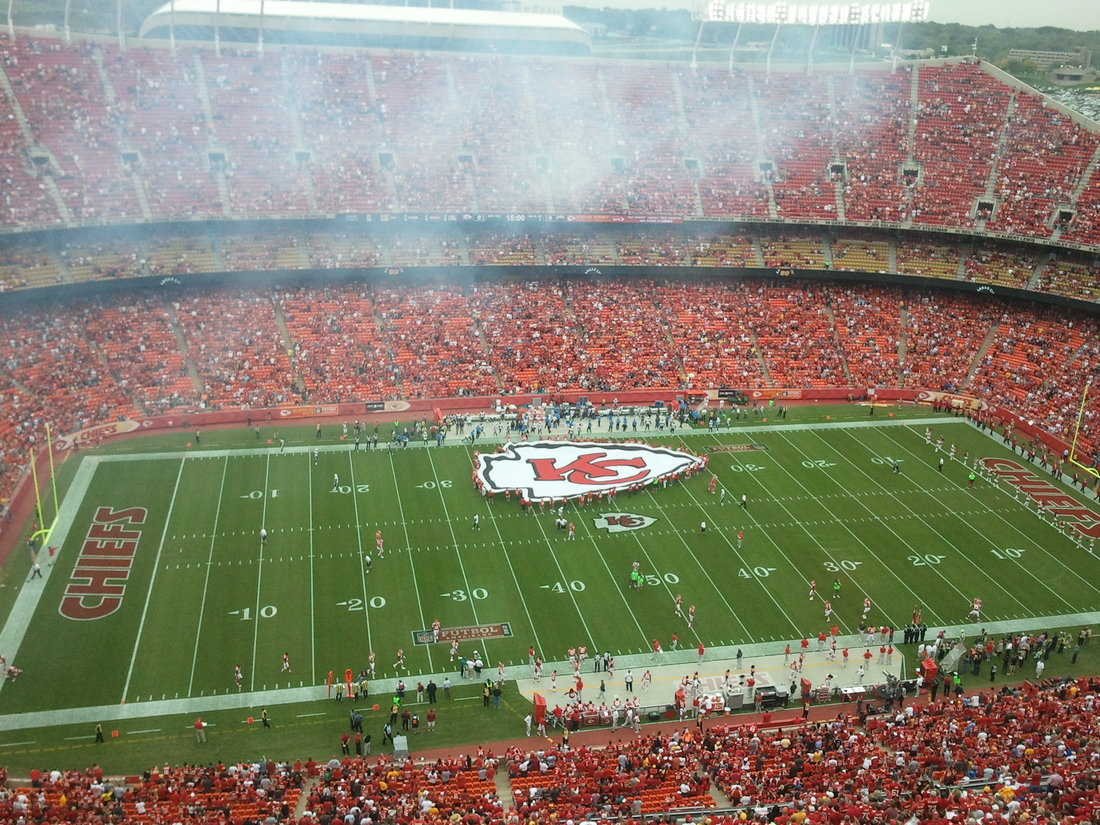 Jackie Battle stuffed on his first two carries for a combined 0 yards. Welcome back, Jackie.

Fight!!! The Chiefs and Chargers got into a little scrum after the third play of the game but the real refs quickly broke it up.

We're back to hating the refs. Eric Berry was flagged for a pass interference on Antonio Gates. What's interesting is that the referee a few yards from the play did not make the call. The referee behind the play by 15 yards made the call.

The first challenge: seven plays in. The Chiefs challenged the spot of the ball and won. So not much has changed and their challenge streak continues. 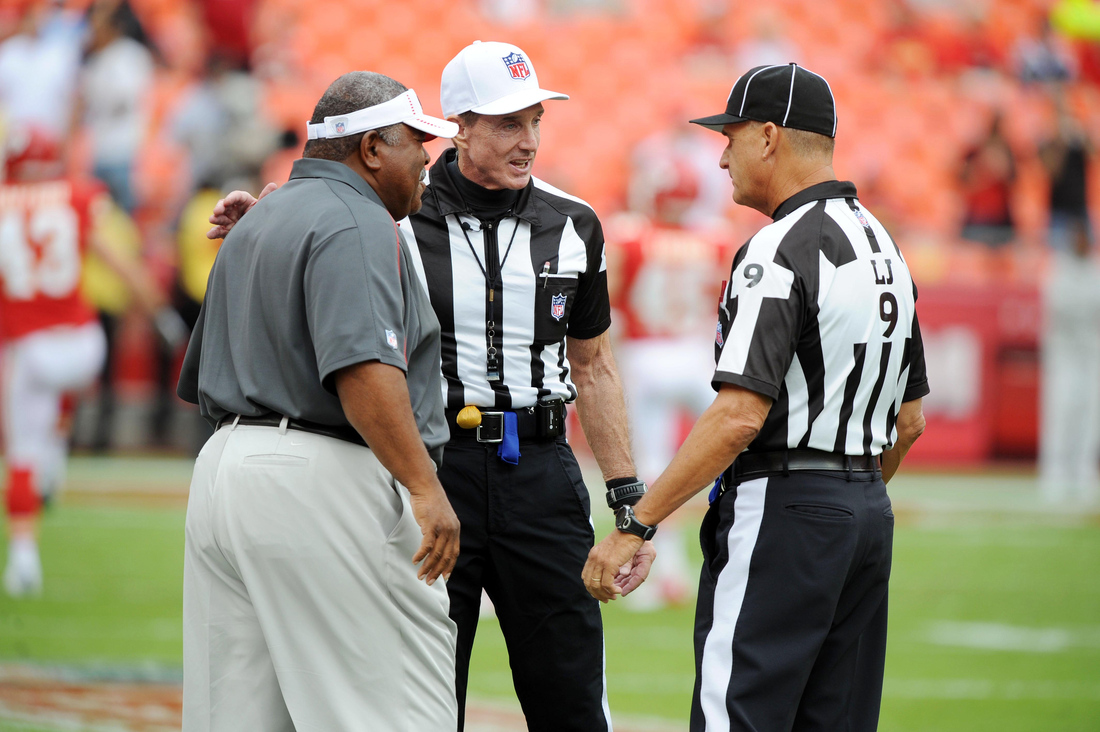 Watch how fast Rivers gets that pass into Royal:

Another fight on the field. Chiefs and Chargers going at it.

Turnover! Matt Cassel throws a pick to Eric Weddle. Check it out below -- a really bad pass:

Cassel is pressured and steps up in the pocket and throws the ball way behind the receiver, right into the hands of Weddle. If you're going to make that pass, you gotta be long. You can't be short. That pick comes after two consecutive completions to Dwayne Bowe to start the game.

Here we go. Chiefs turn it over again. Charles fumbled and Chargers have it inside the 10. Ugly early here. 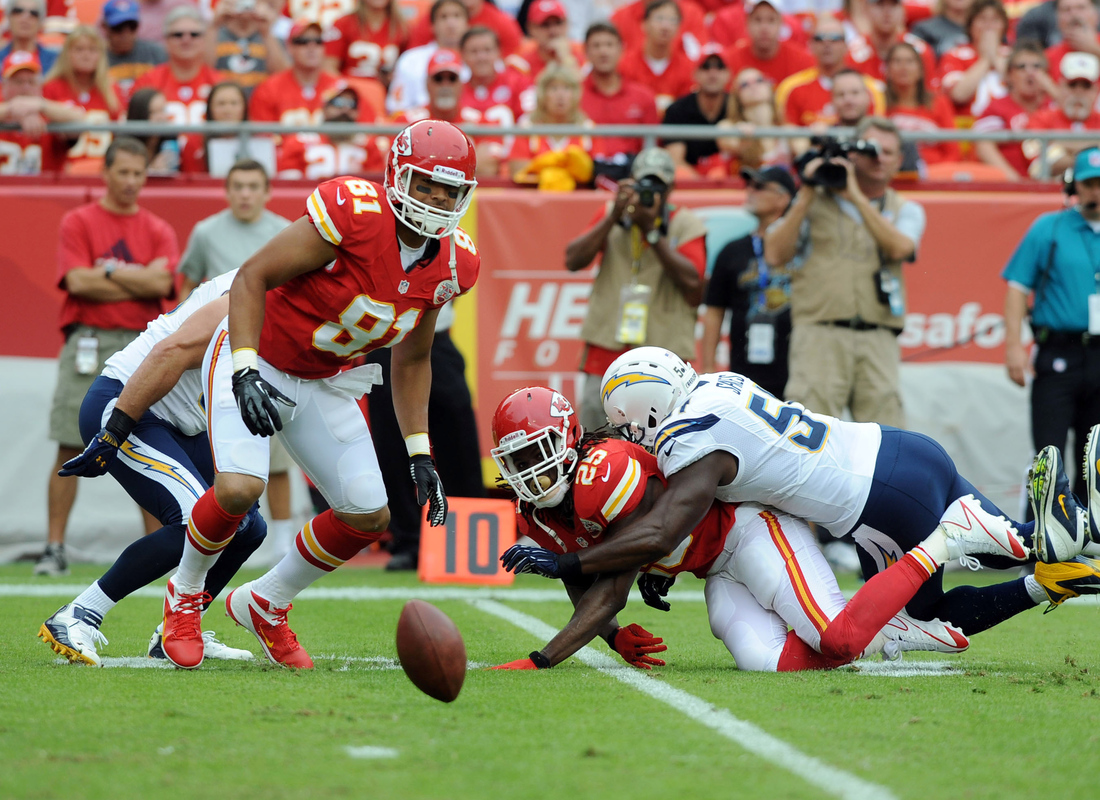 The area of the field where you can NOT make a mistake. This looks like a bad mistake by Charles, not protecting the ball. It pops loose and takes a Chargers bounce, where they recovered inside the Chiefs' 10-yard line.

Score update: Chargers 17 Chiefs 0. Wow. Jackie Battle punches it in for the Chargers.

#Chiefs ran four plays, had two turnovers plus a false start. Down 17-0

A few boo birds are out in the first quarter after the Chiefs have to punt the ball away.

The problem with getting down so much so early -- well, there are a number of problems with it -- is that the Chiefs will feel like they have to start passing the ball instead of sticking with Charles.

Looked like a Cassel fumble. One ref signaled Chargers ball. The other one announces it was ruled incomplete pass.

Whoa, Chiefs keep the ball. To me looked like fumble but I'll take it. KC still alive! (sorta)

That's three turnovers in 22 minutes of play. And the Chargers have recovered all three inside the Chiefs 30-yard line.

TURNOVER IN THE CHIEFS FAVOR! Finally, finally, finally. Brandon Flowers picks off a Rivers pass a couple plays after Charles gave it to San Diego on the fumble.

Score update: Chargers 20 Chiefs 6. Oh baby what a play! Jamaal Charles with a run that you will see on replays for a long, long time.

So many things to look at...

Look how bad that blocking was on the right side of the line. Look how wide open the left side of the field is. Look how fast Jamaal is. Look at that Cassel block, or attempted block. Look at his speed when he hits the opening. Look at Charles do it all (and fumble!).

Again, this is on Cassel. STOP THROWING BEHIND THE RECEIVER! It's hard to tell in the GIF above but the ball is behind Moeaki, tips off his hands and lands right into the defender's hands. It is the second interception of the day that has come from a bad Cassel pass. The other one, which you can see above, was also behind the receiver. That's inexcusable. He can not make plays that are so easy to intercept if he's off.

What better way to cap the first half than a Cassel interception. The Chargers pick him off for the fifth turnover of the first half.

Score update: Chargers 27 Chiefs 13. Cassel scrambled out of the pocket and found Charles streaking across the field for a touchdown pass. Charles dove in near the corner of the end zone. This is Charles' first receiving touchdown of the year and the seventh of his career.

7:07 remaining in the third quarter: I'm feeling there's a slight ray of hope in this game. The crowd is kind of starting to get back into it after KC's defense stepped up on a third down stop.

Ropati Pitoitua, filling in for Glenn Dorsey, has two sacks.

AND TAMBA'S FIRST SACK OF THE YEAR!Rivers down at the 1 yard line!

Cassel is not having a very good game....

Bowe had a yard or two between him and the defender...but Cassel misses him. (/bangs head against wall)

Matt Cassel misses a throw that I watched Geno Smith hit a handful of times yesterday.

Right as I feel the Chiefs may have a chance to make this competitive, Shaun Draughn fumbles the ball. Is this real life?

Score update: Chargers 34 Chiefs 13. Jackie Battle, you win this round.

Plenty of open seats midway through the fourth quarter... 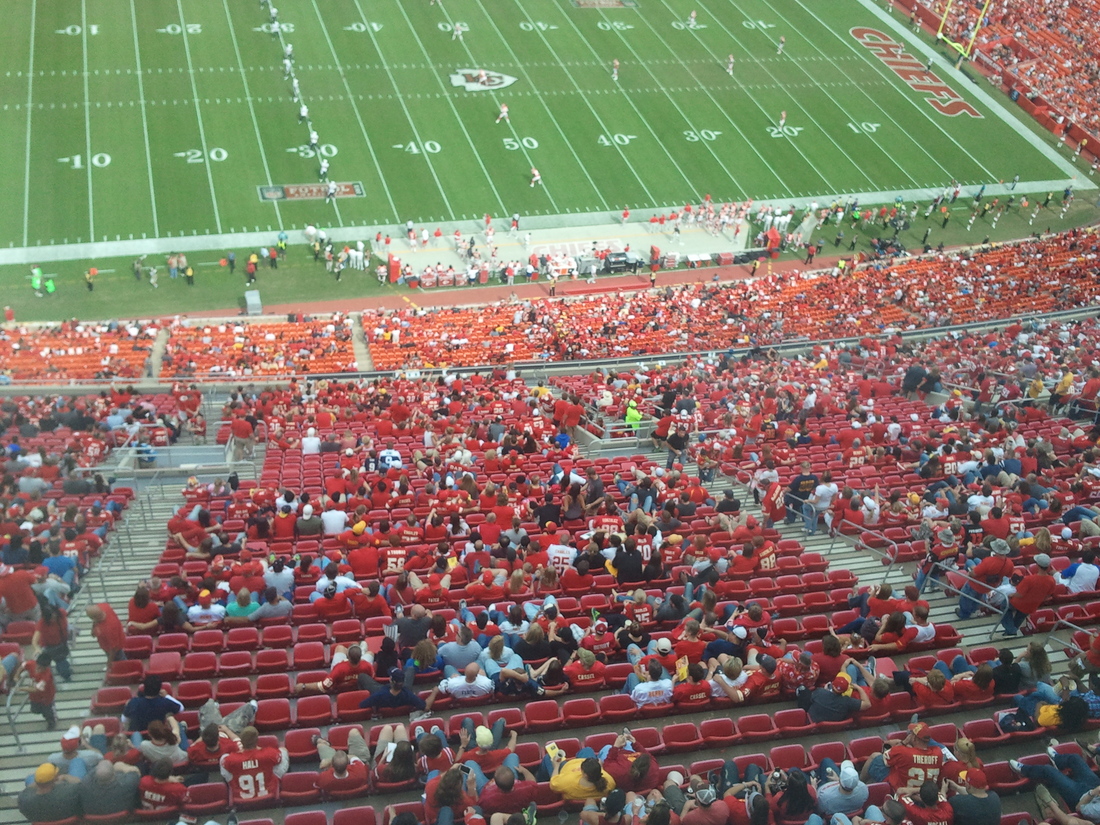 Garbage time. This is where the Chiefs excel. Let's do this, No. 1 offense in the NFL.

Charles should not see the field the rest of the day for the #Chiefs. Neither should Cassel, really, but for different reasons.