Share All sharing options for: Dexter McCluster's Ugly Injury Is The Downside To Chiefs' Upset Over Saints

If there's a negative to come out of the Kansas City Chiefs 27-24 overtime upset over the New Orleans Saints then it's the injury suffered by Dexter McCluster.

On the first play of the second half, Matt Cassel hit McCluster in the flat. The pass was a step ahead of McCluster so he lost his balance while making the reception. When he put his arm down to brace his fall to the ground, his elbow bent...the wrong way.

He hit the ground and, untouched by a Saints player, let go of the ball. A Saints player picked it up and the referees determined via review that it was indeed a fumble and the Saints took over.

The McCluster injury did not look good. At all. We don't know how long he'll be out but with the way that elbow bent I'd guess he's going to be missing some time.

We have a screen shot of the injury below, as well as the GIF, but you have been warned that this is not a pretty picture. 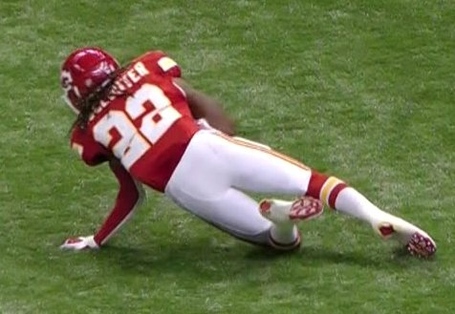 Yikes. Now watch it in action:

The Chiefs are in an odd place if they've lost McCluster for any stretch of time. He's become more valuable this year as a slot receiver and the Chiefs next true slot guy would be Devon Wyile, but Wylie has been hurt and he's a rookie. Probably not the best choice at this moment.

The next move would be to look at putting Jon Baldwin or Steve Breaston in the slot. Baldwin played a little there last year when he was breaking into the league. Breaston plays on the outside and not usually on the slot. Breaston looks like a slot guy though and has the quickness to be able to play that position.