So how did the Chiefs D do?

This is the first time I've done a game breakdown with this banner when Tamba didn't play. A bit surreal.

Welcome to your weekly Kansas City Chiefs Front Seven Evaluation! Throughout the year, I'll be rewatching the games (All-22 tape is phenomenal!) and keeping track of some of the things that I see in the trenches and away from the ball that others may not immediately recognize. I hope for everyone to utilize this as a tool to see how individual players fulfill assignments and combine to create good and bad plays, so make sure to tune in all year and see how our boys improve from game to game.

In Week One, the Chiefs lined up against the Atlanta Falcons in what can best be described as a track meet. Neither defense was able to stop the ball in the first half, and the Chiefs didn't force a punt until midway through the fourth quarter. Naturally, one would assume that the defensive numbers are absolutely abysmal. Some were, but there were a few plays and a couple players that stepped up and did their job well. Grab some coffee, maybe a sandwich, and let's go through the game to see what happened. 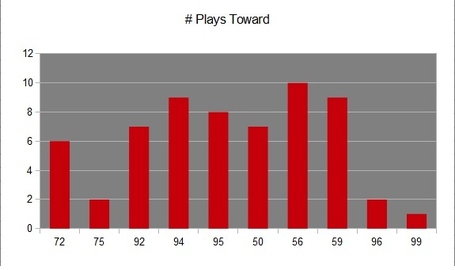 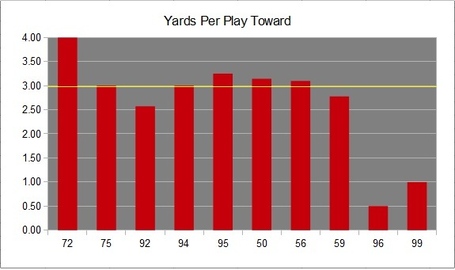 As you can see, I've placed a yellow line even with the 3 YPPT mark. Anything less than that is a punt, if the team ran the ball three times. Studebaker and Jones show up underneath the line, but Studie only saw 2 plays, Jones saw 1 at his side. Of those with significant plays run at them, you can see that the standouts were Dontari Poe and Jovan Belcher, who both had great games against the run, with 2.57 YPPT for Poe, and 2.78 YPPT for Belcher. Dorsey is the high water mark, facing 6 plays for 24 yards. 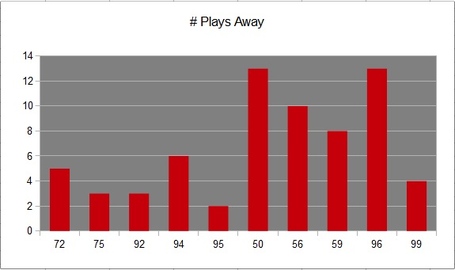 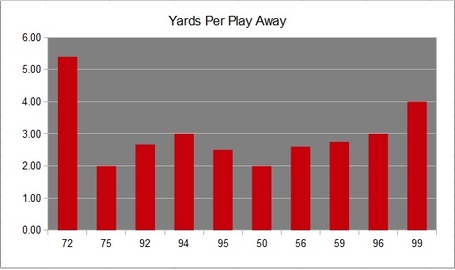 The two graphs shows that Atlanta didn't run much against the dime and nickel defenses (see Jones' plays faced and plays away), and when they did run, they ran up the gut of the defense (see Houston and Studebaker's plays away). You can also see that Atlanta had much more success running at Justin Houston than they did running away from him.

Other Items of Note:

Justin Houston finished the game with four quarterback pressures and one sack. That means on 15.6% of pass plays, Houston was able to do some damage. That may seem low, but but that is a legitimate threat, especially considering he was the only true pass rusher and Atlanta schemed against him. DJ had 2 pressures, Poe and Ropati each had one.

Dorsey and Jackson led all linemen in effective double teams, each registering four. Keep that in mind when looking at Glenn's YPPT number. He may have done his job, but the guys behind him may not have. Poe grabbed two EDT's, and Ropati grabbed 1.

Dorsey, Poe, and Belcher all registered tackles for loss.

Jovan Belcher shot a whopping NINE correct gaps this game. Considering he only saw seventeen run plays, he was over 50% for the day. Taking into consideration where the run was going and free offensive linemen, that's excellent. DJ had a respectable seven correct gaps in twenty run plays.

Dorsey, Poe, and Powe all had a team high two destructive free men. Jackson had one.

There was a lot more on the "good" side of things than I originally thought, but the game was still really bad defensively. Houston, Belcher, and Poe all played fantastic games. Add in Jackson's 3.0 YPPT, and that's a very formidable four against the run. On top of that, Houston really got after the QB well, dropped into coverage well, and made a mess of things for the Falcons. If anything gets taken from this game as an observer, it appears Houston is starting his Sophomore year on the right foot.

Also on the plus side, it's going to get better. Tamba Hali helps this defense be better against the run and puts a ticking clock in the quarterback's head. It forces teams to bring a running back or tight end to his side to chip block him, taking away an offensive weapon. Derrick Johnson had possibly the worst game of the last three years of his career. Something tells me that's not the DJ we'll be seeing week in and week out. Whatever the reason behind his poor play, something will get figured out on that front. Finally, Brandon Flowers will make the biggest difference. Atlanta threw at the right side (Reeves' side) 40.6% of the game, most of them short passes. Getting someone to take away those short passes, force the quarterback to hold onto the ball longer, and bringing the heat from Houston and Hali...that's a good way to ruin any team's offensive game plan. Hopefully that defense is able to show up tomorrow against the Bills.

Thanks for reading, everyone, and remember to look for this post every week on Saturdays. As always, any questions and comments are welcome, and I'll do my best to answer in the comments below.