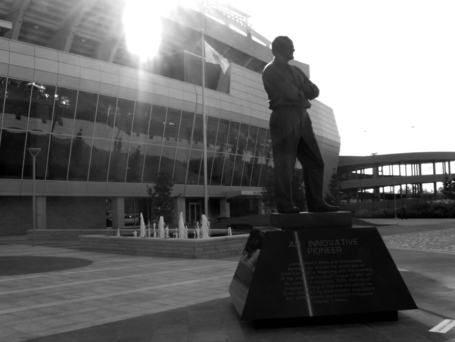 Good morning! Today's first article reminds us that on this day in 1932, Mr. Lamar Hunt was born. An amazing man who had a huge impact on his world. Thank you Mr. Hunt.

Thursday, August 2nd. Today marks the birthday in 1932 of Lamar Hunt, an influential figure in the development of several professional sports in America. He cofounded the American Football League and owned the Kansas City Chiefs. Hunt also came up with the name "Super Bowl" for the annual meeting of what is now the National Football Conference and the American Football Conference.

Jon Baldwin, not Dwayne Bowe, has been the most important player for the Chiefs during this first week of the preseason, and boy, has he answered the challenge. Baldwin, not Bowe, is not only in attendance but is emerging as a player who looks like a young star who could give quarterback Matt Cassel a tall, powerful option down the field. Baldwin, not Bowe, is doing everything right when the man who was supposed to be his mentor is making a career mistake by refusing to sign his franchise tender - and allowing a second-year receiver to show the Chiefs how it's done.

Voice of the Chiefs Mitch Holthus and I had a great time at the first stop of the Chiefs 50 Years in Kansas City Celebration Tour.

Held at the HyVee in St. Joseph, Mo. - home of Chiefs Training Camp - Pro Football Hall of Famers Len Dawson and Bobby Bell were on hand to sign autographs and fans were able to get their pictures taken with the Lombardi Trophy from the Chiefs victory in Super Bowl IV.

KCChiefs.com Video: 9 Days To Kickoff - A Look Inside Training Camp

During the past two years, Chiefs inside linebacker Jovan Belcher has made more tackles than anyone on the team besides Pro Bowler and fellow inside backer Derrick Johnson.

But making tackles is one thing. Making an impact is another.

And Belcher, a two-year starter, knows how important it is to start producing game-changing plays such as forcing fumbles, recovering fumbles, sacking the quarterback and intercepting passes.

Chiefs Like What Linebacker Belcher Brings To Defense from KC Star

Woe is Poe? It's far too early to worry about Dontari Poe, the Chiefs first-round draft choice. The Chiefs are probably doing the right thing by bringing him along slowly. But Romeo Crennel recently tried to downplay expectations for Poe, saying that for now, at least, he's going to be a pass rusher and nothing else. That's OK, for now. If the Chiefs get something from Poe early in the season, they're a better team. Eventually, Poe needs to make an impact against the run. It looks and sounds like that time might be far off.

No general manger has much patience for a veteran holdout and I'm sure Pioli is no different. Yet, he does have experience in this situation, as this is not Pioli's first holdout rodeo.

In 2007, when Pioli was an executive with the New England Patriots, cornerback Asante Samuel held out as the franchise player.

It's a big transition year for the Kansas City Chiefs. Romeo Crennel did well enough with the team as interim last year to get the nod as Head Coach for this season. They have some nice pieces but what can it amount to and who should we target for fantasy football?

As we continue our season preview, we're joined by Patrick Allen of Arrowhead Addict for an insider's look at the Chiefs upcoming season.

I thought the ‘no' vote would win pretty easily, because of all the negative emotions Cassel has invoked on this blog.

Yet, I was pleasantly surprised to see so many ‘yes' votes cast. With an outstanding supporting cast, I think Cassel can make a positive impact on this team. Thanks to everyone who played along.

Roaf said goodbye to New Orleans when he was traded to the Chiefs in 2002. That was great news for Kansas City's Trent Green. Willie stepped right in and helped the team post some of the finest offensive numbers in the franchise's long and storied history. The Chiefs led the NFL in points scored in 2002 and 2003 and their yardage total was tops in the AFC in '03 and the entire NFL in 2004 and 2005.

Roaf, a six-time All-Pro offensive tackle, recalls when former Chiefs defensive end Derrick Thomas called him on the phone the night before a game in 1994 and told him he would not make the Pro Bowl because of his play against Thomas the next day. Roaf shut down Thomas.

It's the few games Roaf struggled in that he can't forget. They still bother him. They were so few and far between that they stick out in his mind.

Willie Roaf Had His Struggles On Field On The Way To The Hall Of Fame from NOLA.com

Adidas micoach - Behind The Scenes With Chiefs' Eric Berry from News10.net

"C'mon, Lenny! Put it to them, baby!" shouts Hank Stram, head football coach of the Kansas City Chiefs when the audio was taped more than four decades ago during Super Bowl IV. "Just matriculate it down the field, boy!"

... Already celebrated as a player, this week Dawson will be recognized by the Hall as a broadcaster.

Postcard From Canton: More Honors For Len Dawson from The Canton Repository

With his grades sagging, his mother, Marlene Stein, and his grandparents believed that without some sort of change in Cauley-Stein's life, he wouldn't have the opportunity to qualify for a Division-I school.

Cauley-Stein had become close with a friend on his AAU team, Shavon Shields, so they moved him 300 miles east to Kansas City to live with the Shields. Shavon's father, Will Shields, was a 12-time Pro Bowler with the Kansas City Chiefs, just the type of figure to insert some structure in Cauley-Stein's life.

Cauley-Stein Ready For The Big Time from CoachCal.com

Personnel executives around the league believe the Chiefs are still a little light on the depth chart at tackle. K.C. will be aggressively scanning the waiver wire when the cuts come around the league. Branden Albert on the left side and Eric Winston on the right give the team two proven starters, but Ugoh's departure likely leaves rookie Donald Stephenson - a Kansas City native the Chiefs took in the third round of last April's draft - as the top backup at the position.

Stephenson also projects as more of a right tackle, at least initially in his career. So, an injury to Albert may be difficult for this team to overcome in the early going.

And don't sleep on the Kansas City Chiefs. They are healthy. Kansas City pretty much played without running back Jamaal Charles, defensive back Eric Berry and tight end Tony Moeaki last season. We're talking about three of the best players on the team. Haley, the team's coach to begin 2011, had a convoluted system to get plays in that hindered quarterback Matt Cassel. Then Cassel himself was hurt. I don't have to guess if Cassel is good enough to lead K.C. to the playoffs; he has done it before. And don't forget about receiver Jon Baldwin. His rookie season was a waste, thanks to a broken thumb suffered in a locker-room fight with running back Thomas Jones that forced him to miss much of training camp and the first five regular season games. Baldwin, Moeaki, receiver Dwayne Bowe and receiver Steve Breaston are big weapons for Cassel. Coach Romeo Crennel is a defensive guru and the kind of even-keel leader Haley was not.

Charles, Kansas City: The Chiefs were devastated to lose Charles to a torn anterior cruciate ligament in Week 2 last season. Charles was the league's second-leading rusher in 2010, and the challenge for him will be regaining his blinding speed after that injury.

Former pro football player of the Kansas City Chiefs and the Tampa Bay Buccaneers James Evans will discuss his book about discovering and understanding the power of human worth and self-awareness. Empowered by his inherent worth, Mr. Evans now helps others with their own discovery.