The Kansas City Chiefs training camp took the night time as the players practiced under the lights of Spratt Stadium for the annual night practice.
We have a number of highlights from practice but for me two them were meeting the world famous @HisDirkness, who is awesome, as well as finally meeting @Jacobs71, Nick Jacobs from Metro Sports. As you figured, we sat next to each other and tweeted about practice the whole time.
Here is the practice report from the annual night practice:
Brandon Flowers left early, apparently with an injury. I'm not exactly sure what happened and didn't see the specific injury. He did come walking off the field, took his pads off and then rode in the front seat of a golf cart back to the locker room. Those who saw it are saying ankle. That's about all I know. Romeo will talk on Thursday where we could hear an update.
Related: Everything I know about the Flowers injury
Two of the three members of the ACL crew did not participate in pads -- Jamaal Charles and Tony Moeaki. Eric Berry, however, was in pads. Charles and Moeaki were just in shorts and a jersey and did some watching from the sidelines but participated in some drills. Romeo hinted at holding those guys back due to the change in playing surface (turf).
Must be Chiefs-related if there's a line anywhere in St. Joe. 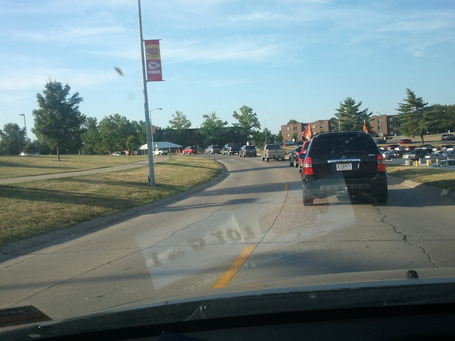 Lots of "Dooooontari Pooooe" coming from the fans as he walks out onto Spratt Stadium.

Tamba, of course, comes sprinting onto the fied, followed by the d-line.

Junior Hemingway also did not participate but because of a groin strain. Like Flowers, he was taken off in the front seat of a cart on Monday, but he's fine. Hoping Flowers has a similar outcome.
Brandon Siler, missing Monday's practice, was back. He's coming back from an Achilles' injury so he apparently needed some rest. He was on crutches on Monday and was back by Tuesday.
Mitch Holthus ran the PA system last night, which is an added bonus of the night practice. He told you what drills the Chiefs were doing and who was running them. Kinda wish he called the 11-on-11 action like a game. 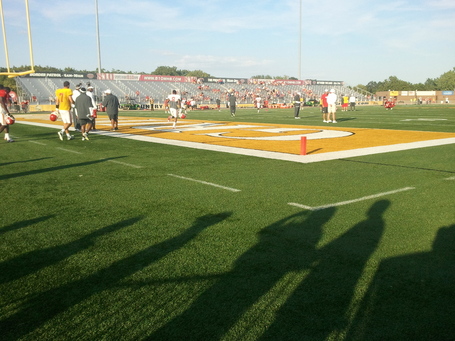 Holthus called out all the assistant coach's names, too, and announced Joe Kim as "defensive assistant Joe Kim". That's changed from Master Joe Kim. Biggest downgrade in title ever?
The crowd laughed when Holthus announced Jim Bob Cooter because we can't help it.
Loved seeing Emmitt Thomas announced as Hall of Famer and world champion. Nice touch.
On special teams, the Chiefs return men included Javier Arenas, Dexter McCluster, Devon Wylie and Steve Breaston, per usual. Zeke Markshausen also had an attempt.
No. 64 was on the field last night. My roster said it was Tony Ugoh, but I have a day old roster. That was Ray Willis, the new offensive tackle signed after Ugoh retired. He's a multi-year veteran who hasn't played much in the last three years.

Notable jersey sighting: An "Obama" Chiefs jersey with the No. 08. I had not seen that before.
Worst jersey sighting: Unconfirmed but I believe we had a Steelers jersey in the house. Looked like it was No. 12, which would be Terry Bradshaw.
KC Wolf was in his element last night. 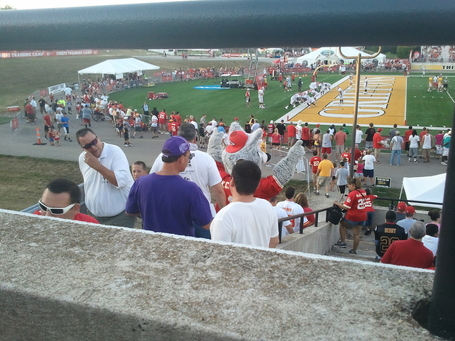 Fun seeing Dontari Poe and Jerrell Powe line up against each other for a quick drill on the sidelines. Two big dudes.
Stanford Routt stuck to Jon Baldwin like glue in some red zone work. Cassel tried to find Baldwin in the end zone but Routt was all over it and broke it up.
Steve Breaston had a nice touchdown over Brandon Flowers early on, with the help of a big push-off. Flowers looked back right after the play -- he knew what was up.
Brandon McKinnie, whose name I've barely mentioned this year, had a nice double move on Mikail Baker which he caught for a touchdown. Brady Quinn was the quarterback.

Matt Cassel had one of those passes you can't defend. Baldwin was lined up on the right in the red zone, covered by Flowers, and he threw the back shoulder pass perfectly, which Baldwin pulled in for a touchdown. I think Aaron Rodgers throws this better than anyone and you simply can't defend it if it's done right.
Terrance Copper had what appeared to be an easy touchdown in team work but UDFA Chandler Fenner hopped in at the last second and knocked the ball away. Nothing like the rook getting the best of the vet.

Breaston takes a slant route but Flowers denies him and breaks it out. Next play, Wylie with a diving grab in end zone, ?able if feet were n

Cassel hit Kevin Boss about 15 yards out down the seam. Very much looking forward to that this year.
Maybe the play of the day came when Cassel found Baldwin in the back of the end zone for a touchdown. Baldwin was crossing the very back of the end zone with Cassel and the Chiefs in the red zone. Cassel threw the ball high, where only Baldwin could get it, and he snagged it and dragged his feet for the touchdown. Cassel came running up for the high five after the play. He was jacked.

Cassel finds Baldwins outstretched hands in the back of the end zone, and he drags his feet for 6. Cassel ran up to Baldwin for the high 5

Developing theme in team workouts: Cassel taking the snap, play-action and flinging it deep to Baldwin. Saw this a few times. Looked like he barely even thought about it. Hey, when your receiver's on fire... 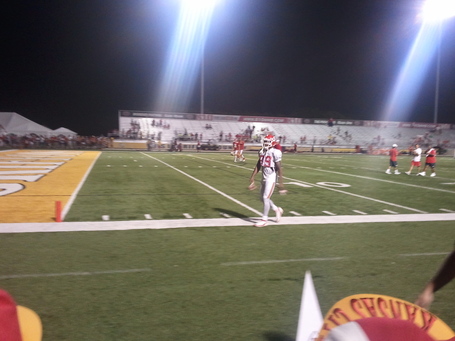 The QBs were throwing to the WRs with CBs covering. Pretty entertaining. Arenas plays to the crowd after a pass breakup, they love it

Jovan Belcher had a nice stop running through the gap seemingly untouched to shut down a run play.
Ropati Pitoitua and Justin Houston combined to collapse the left side of the line, making Brady Quinn scramble. I'm thinking he would've been sacked if quarterbacks could be hit.
Andy Studebaker had a sack coming off the left side as well.
Cyrus Gray caught a pass in the flats and put on a juke move on Jalil Brown which got the crowd going. Gray had two guys to beat for a touchdown -- Brown, which he juked, and then the safety.

Oh man, Javier Arenas drops a pick. Without a doubt it would've been 99 yard TD.