For the first time in the last four days I won't be spending my afternoon up driving up I-29 and watching Kansas City Chiefs training camp. But just because we won't be there doesn't mean there won't still be a lot of information coming out about practice.

This is your open thread for the practice, which starts at 3:20 p.m. We'll periodically update this with any observations coming out of camp. The comments are usually your best bet in terms of timely info from around the internet. 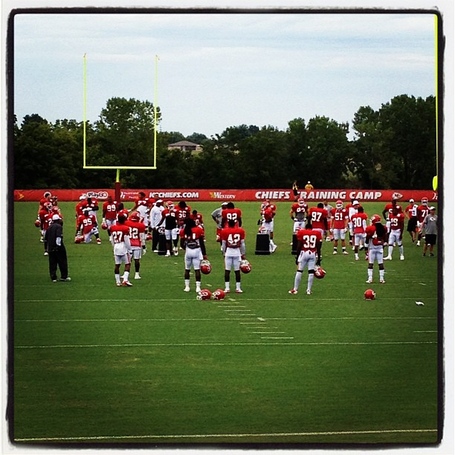 Afternoon practice has started. Albert is back in pads. No brandon siler. Sore ankle

They're still just running around and stretching and stuff. Exciting. #Chiefs #TrainingCamp

Team as a whole running a lap. The crowd rejoices! #Chiefs

Jr Hemingway being carted off #chiefs

New LB Edgar Jones is working with the conditioning coach off to the side. Can't practice in pads for 3 days

WR coach just yelled at Wylie after a one handed attempt: "None of that one handed bull shit, get em both up there" #ChiefsCamp

Nice day by the back up running backs today. Good sign #chiefs

#Chiefs WR Jon Baldwin is having a monster practice, catching everything in sight.

Baldwin with another deep catch w/ Routt and Lewis in coverage. Shortly after Charles busts through a seam on a big gainer run play. #Chiefs

Flowers picks off Quinn during 11 on 11. Neither backup QB having a particularly good camp. Cassel easily outclassing them. #Chiefs

Baldwin seems to be able to do what he wants today. This time he beats flowers #chiefs

Chiefs LB Brandon Siler has been noticeably limping. Not a good sign for a guy coming off an Achilles injury.

Amon Gordon limps off field prior to final sprints of #Chiefs practice. Likely cramps but not sure