Kansas City Chiefs training camp continued on Sunday in what was the hottest day of camp so far. The temperatures neared 100 degrees and the players were out on the field at Missouri Western State University for a little over two hours.

There were no big injuries or missing players from Sunday's practice. The big highlight is that it was the first day of pads, which you could immediately tell. The sounds of pads crashing into each other and the general rise in intensity was visible. It was good to see.

AP reader Flavian79 attended practice and wrote up his report. Check that out.

Full practice report is after the jump. 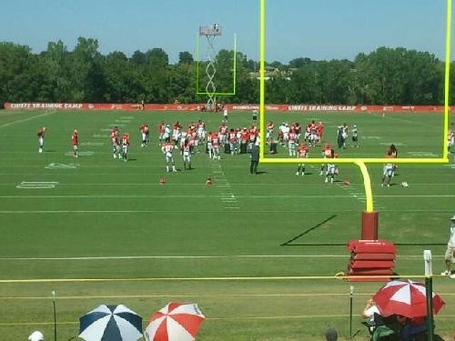 Almost forgot the Chiefs were in pads until 11 on 11 just started. Pretty intense, guys gettin into it. Been a while.

The offensive line drills is when you could first notice the pads. The offensive and defensive linemen barreling into each other, players falling over, running backs hitting the hole...felt good to see that again. It's been too long football!

Clark Hunt was at practice, which is actually the third day he's been here. Hunt arrived on Thursday when the rest of the team did, stayed on Friday and then returned once again on Sunday.

Best/strangest sign at Sunday's camp: "Matt Cassel let the dogs out!" I have no idea.

The defense does a drill right in front of where the media sits so you can hear how high energy Romeo Crennel is. Everyday he says, "Sing me a tune, a winning tune!"

Justin Houston returned to practice. He was sick yesterday and missed practice but returned on Sunday. 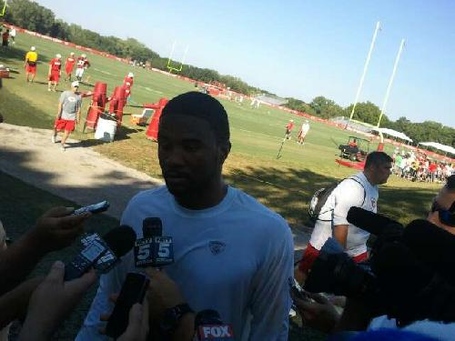 It's 100 degrees at camp and I'm exhausted just sitting there watching the players. I can't imagine what it would be like for the tight ends who had to run through a blocking drill against the linebackers. At 100 degrees and an hour into practice, the absolute last thing I want to do is try and block Tamba Hali.

This is a great umbrella/tent from a fan who knows what's up. 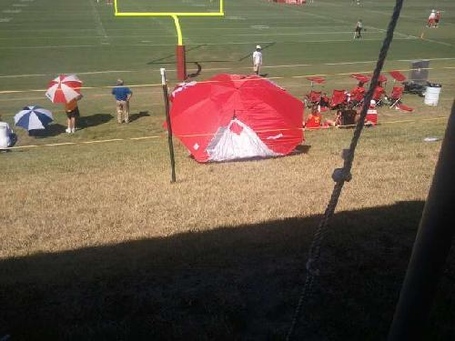 Matt Szymanski is the other kicker at camp and I saw him working on some punts and kickoffs as well. With an extra kicker, this camp can't be very difficult for Ryan Succop.

The quarterbacks were throwing some routes to the receivers while the cornerbacks covered the receivers. On one play, Matt Cassel went deep to Jon Baldwin, right around the front right corner of the end zone. Eric Berry was covering and stayed with him step-for-step and knocked the ball away. Berry is just so good. He could play any position in the secondary, including corner.

The Chiefs also practiced punts from their own one yard line, which happened to be right in front of where I was sitting. Pretty incredible view of Dustin Colquitt trying to get the punt off. I have no idea how he does that.

Moving to special teams....working on punt team. Breaston and McCluster are deep.

I also have no idea how kick and punt returners do it. Sitting down at camp, you can see how fast-paced everything is and you have to not only catch a ball that's rotating in funny ways, but catch a ball that's kicked what seems like a mile in the air. And then you have to catch the ball and make a move while you have 11 guys running full speed at you. I couldn't do it.

Brandon Flowers was wearing all red sleeves, which looked pretty awesome. Reminded me of the red socks in the Halloween game.

Brian Daboll's a high energy guy, getting on players when need be. He's no Charlie Weis but you hear the occasional adult word out of him. 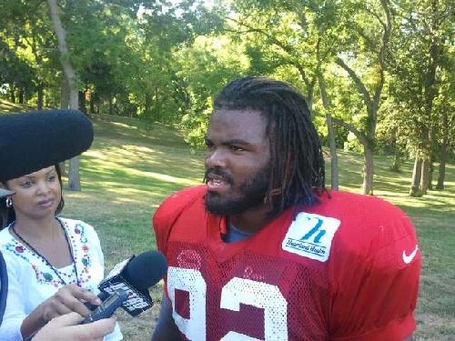 We sit in a media tent, which provides some shade, but I like to move around to get a better view of things sometimes. I went down to the field to check out the offense running some 7-on-7 drills and happened to pick the perfect spot. Right as I got down there, I see Brady Quinn trying to hit Devon Wylie on a quick out pattern right in front of me. That left me the perfect seat to see Flowers show how freakin' quick he is and step in front of the pass and take it back for six. That made the crowd go crazy. 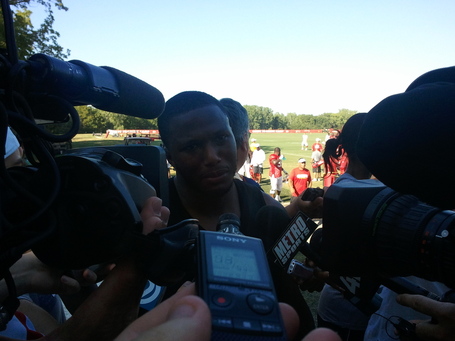 Brandon Flowers just picked off a pass intended for Wylie. Yes, it was for six. Crowd was cheering him on. So fast

Alex Tanney taking some reps...nice pass to Markshausen on a crossing route, lots of room to run.

Steve Breaston had a nice sliding catch. It looked like Cassel's pass down the sideline was a little short causing Breaston to slow down but it ended up working out as the ball fell right in between the cornerback and the safety.

I started to see the first signs of taking it easy on some of the ACL crew. Berry and Kendrick Lewis sat out a few reps during 11-on-11 work as did Jamaal Charles. Abe Elam was stepping in for Berry and Shaun Draughn took a few reps from Charles. 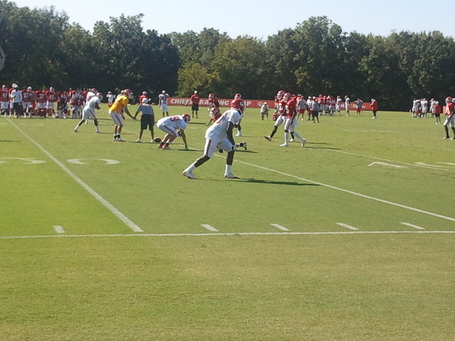 Branden Albert is out here, listening to coaches with the linemen. Not in pads.

Donald Stephenson was running left tackle with Branden Albert out.

Speaking of Albert, he was out because of a new NFL rule which says you need to be in camp for three days before putting pads on. Albert missed the first day so he couldn't put pads on today. He spent his day in the conditioning area, riding the exercise bike.

Javier Arenas picked off a pass intended for Dexter McCluster in the flat. It looked like he got to the ball at the same time as McCluster and just ripped it away from him. You gotta win in a one-on-one situation, as Herm Edwards said in HBO's Hard Knocks a few years ago.

Arenas picks off Cassel. Pass intended for DMC but Arenas ripped it away, defense is going crazy

Cassel and Rodney Hudson screwed up a snap and fumbled the ball. Cassel picked it up quickly and went deep -- incomplete.

Jim Zorn rides a bike after practice. This isn't a very good shot because he was too fast -- Yes, I was running with my phone trying to take a picture of Zorn on a bike -- but check it out: 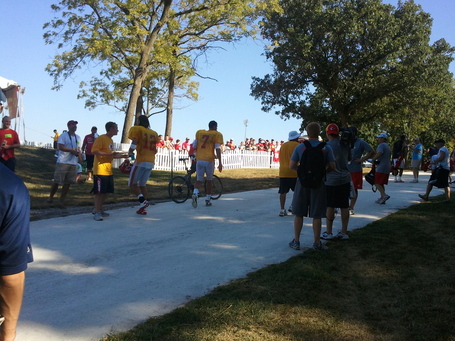