Ricky Stanzi, Big Fan Of The USA In The Olympics

Share All sharing options for: Ricky Stanzi, Big Fan Of The USA In The Olympics

As many of you know, Kansas City Chiefs QB Ricky Stanzi is a huge fan of America. Loves it. Can't get enough of it. With the Olympics going on right now, this was an obvious line of questioning.

Q: How about the red, white and blue in the Olympics?

Stanzi: "It's been tough to get to a TV. I haven't seen anything, which is kind of nerve wracking, but I'm trying to keep up on my phone. It's exciting, but obviously this is more important right now."

Stanzi: "I like [Michael] Phelps, some of the lady athletes too, pretty talented."

Stanzi's boy Phelps went down to Ryan Lochte in one of the swimming events yesterday.
Stanzi's teammates have a little fun with him and his love of America. Anthony Toribio said a while back he will name his son Ricky Stanzi and here's what Dustin Colquitt tweeted out on Friday:

For one final Chiefs/Olympics tie-in, here's a picture of a fan at the Olympics wearing a Chiefs shirt (via @HungryKC): 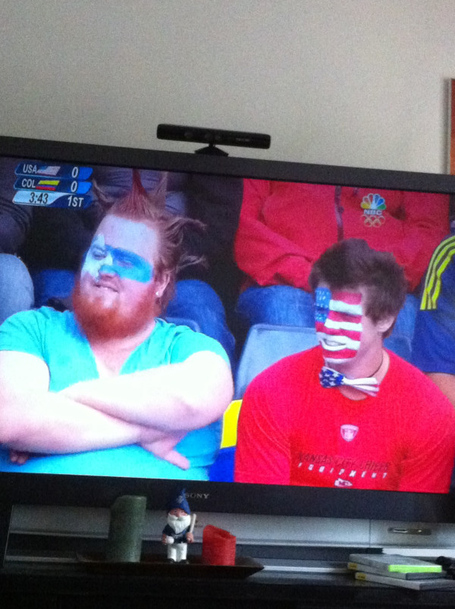