Good morning everyone. I'm here with another practice report from Kansas City Chiefs training camp.
Yesterday's practice was a good one. Not too hot and some competitive team action. The best part of these practices, and arguably the only area where you can get actual insight, is the team portion stuff, going 11-on-11 or even 7-on-7. These practices are "no contact" but that's a relative term when you're dealing with guys this size.
I'll be adding more photos from camp to our Facebook page. Check out our Twitter page for more notes.
You can find the practice report after the jump. I'll be in the comments if you have any questions.
No Justin Houston at Saturday's practice and we're not really sure why. Romeo Crennel will be speaking today which is the first time he'll have been asked about it. Jacques Reeves was also missing, but Crennel already talked about his absence for personal issues.
With Houston out, Andy Studebaker stepped in at outside linebacker opposite Tamba Hali.

Ricky Stanzi hits Copper 40 yards down field. Was rolling out to his right. Now a competitive 11 on 11

Hilarious fan watching Dontari Poe run drills. Every time Poe would hit the sled, or any other simple drill, the fan would yell "Hit it Poe!" and "Yeah, Poe, get it baby!" We talkin' bout practice? 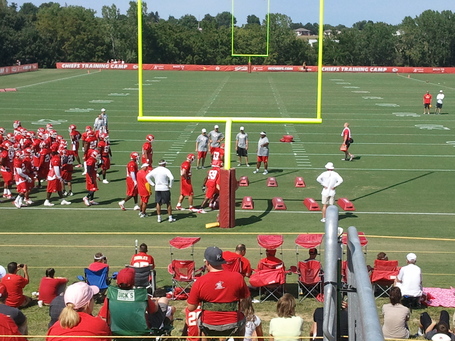 Here's a video shot by a fan out there that shows the drill they're running in the picture above.
Brandon Bair looks sharp. Granted, it's just individual drills but he looks big and strong. As an undrafted free agent you probably don't think much of him. But then you realize the Chiefs kept him on the active roster all year. That should tell you how they feel about him.
Kyle McCarthy went down with an injury. The Chiefs were running 11-on-11 and the ball went to his side of the field. I didn't see specifically what happened but he went down clutching his leg. Injuries in non contact, or little contact situations like that always worry me. He was helped off the field, didn't put weight on his legs and then carted off. I saw an SUV on the way up to camp that had Notre Dame stickers all over it, and a ND license plate. Hoping that wasn't his family who saw that (if it's something bad). 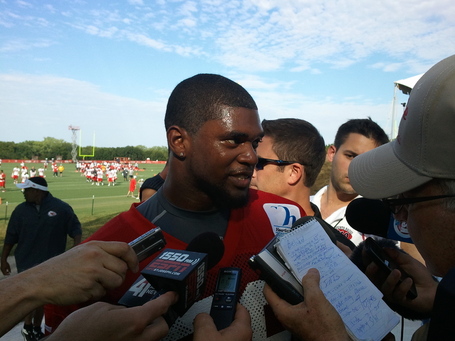 A number of guys got work in kick returns including Javier Arenas, Devon Wylie and Dexter McCluster. Those are your main three but Shaun Draughn and Mikail Baker also got back there one time.
Matt Szymanski was doing the kicking in some of these special teams drills. He's an undrafted free agent the Chiefs picked up this year. There's nothing wrong with Ryan Succop -- they just like to have two kickers in camp.
Branden Albert said after practice he doesn't know if the Chiefs will be a good offensive line until they line up in Week 1. Eric Winston said there's no reason they shouldn't be a good offensive line. Frankly, they should be one of the better lines in the league. 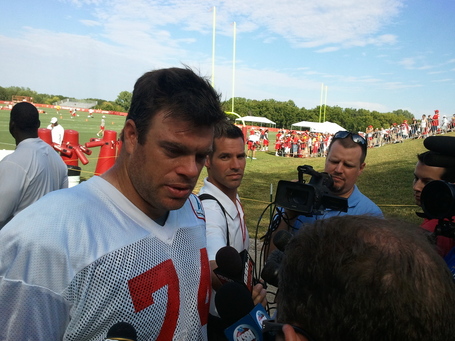 While most of the defense was on the sidelines during special teams drills, Tamba Hali and Tyson Jackson were off to the side working together. You know Tamba's hand-drill-thing he does with Master Joe Kim? He was doing the same with Jackson.
Glenn Dorsey says he can do things to help Dontari Poe but at the end of the day it's about him performing and playing with the right technique. He says the defensive line isn't just about Poe, either. It's about playing as one unit along with Tyson Jackson. 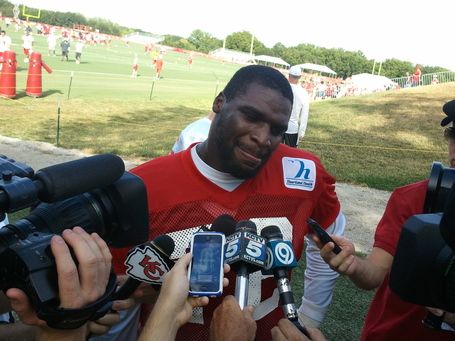 Derrick Johnson is so athletic. It's not a special play or anything but when you see him cross the field so quickly, and then realize how long he is and what his range is, you start to understand why this guy was in the Pro Bowl. Matt Cassel was trying to hit Tony Moeaki on a little hook, a simple play. But DJ hopped in there and knocked it down.
Also, seen this before: DJ makes athletic move to get in front of a pass but drops the pick! Where are those receiver gloves? 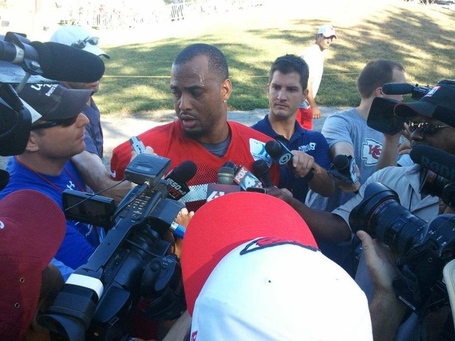 Cassel threads the needle through three different defenders to hit Steve Breaston in the middle of the field. The fans went crazy cheering on that one. On the next play, Cassel found Kevin Boss down the seam for what would've been a 20-yard gain. That tight end in the seam is what I want to see a lot this year.

Breaston gets wide open against the D and goes in for a TD. Cassel then hits Boss down the seam. Dabolls loving it

Steve Breaston wears black sleeves and socks. Not sure how he does it. #chiefs

I said it on Friday, saying it again today: Devon Wylie is quick as hell. Just a simple slant really shows it off.

Jalil Brown with a great pass breakup. Right after Stanzi the manzi found Wylie on a quick slant.

Remember Steve Maneri? He was the offensive tackle who turned tight end for the Chiefs. I gotta say, he's somewhat impressive. He's got offensive tackle size but he can run. Interesting player. 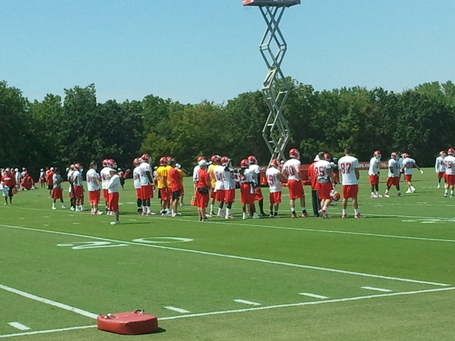 Love some of the banter between the offense and defense. Gettin at it with very little contact.

The quarterback reps were split up today. It went Cassel, Ricky Stanzi and then Brady Quinn. On Friday, Quinn was ahead of Stanzi, so it looks like they're going to rotate.
Josh Bellamy, the undrafted free agent receiver, drew some applause with a diving catch in practice. It was on the opposite side of the field from where I was standing so I didn't get a great angle on it but it appeared he stayed in bounds diving to catch the ball.
Travis Daniels was at safety for most of the time but also saw some time as a backup cornerback.
I haven't talked to him yet but Ropati Pitoitua may be the biggest human I've seen. 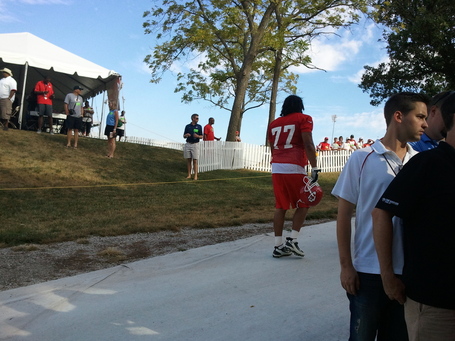