KC Chiefs ACL Crew Has Their Swag Back

Share All sharing options for: KC Chiefs ACL Crew Has Their Swag Back

The story line heading into day one of Kansas City Chiefs training camp was the health of the ACL crew -- Tony Moeaki, Eric Berry and Jamaal Charles. After watching those guys on the field yesterday, I can happily report there's no noticeable difference between them. They seem just fine.
Of course, the players are just in shells right now. Let's put the pads on, turn up the intensity and go 100 percent and see how they look.
Just to reassure everyone that, yes, the players look fine, I collected quotes from the ACL crew, as well as Romeo Crennel, talking about their health. 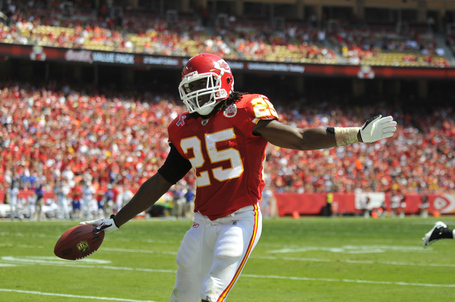 Matt Cassel, who had the hand injury last year, said his hand is just fine. Kendrick Lewis, who had offseason shoulder surgery, was out there. He'll be wearing a brace to protect his shoulder.
Here's what Romeo said about monitoring the reps the ACL crew gets:
"I think that's kind of routine [to take it easy on guys coming back from injury] because what's going to happen is that joint hasn't been stressed the way it's going to be stressed in pads and out there on the football field and sudden cuts and things," Crennel said on Friday.
"Most of the work that they've been doing now in the offseason, it's all planned, it's straight line, they know when they're going to make the cut, they know when they have to turn, they can go straight ahead, but on the football field, it has to be a reaction. You may be going full speed this way and have to plant and go back this way. So, some of that will irritate the knee initially. Then, when you get it irritated, you get a little swelling.
"So, if there's swelling in the knee, then we're going to have to back off just a little bit until that joint gets acclimated to the kind of work that the guys have to endure. The only problem that you can encounter then is that if it continues to swell and doesn't acclimate, then you've got a problem."