Good morning everyone. Apologies for not getting the KC Chiefs practice report up last night but I didn't get back til late for a few reasons so here I am now.
We've got some pictures, notes and other observations from yesterday's practice. I'll have another picture post coming up soon with professional, high-quality pictures.
Here was yesterday's practice...
Best part of the day: walking onto the field and seeing Jamaal Charles. He happened to be taking a carry in some walk through stuff and burst through the right side of the line and, as Charles does, he finished the run off all the way to the end zone. Fans started cheering him and he waved back. Not a bad scene to see right as you walk onto the practice fields. 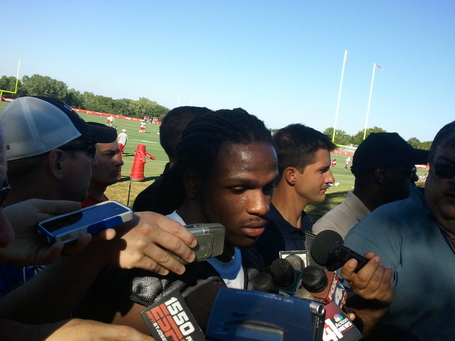 Jamaal Charles: "I feel like I got my mojo back." Doesn't wanna rush himself, play it "smart"

No contact yet. Not until Sunday. The Chiefs were in shells, which basically means shorts and a helmet. Because of that, these are some light observations from practice. It's hard to get a gauge of how good a player does or doesn't look in shorts. But we still have a lot of observations to share.
Hardest part about the first day of camp: getting your numbers right. No. 53 is not Demorrio Williams and No. 39 is not Brandon Carr. We're given rosters at camp so that we can match up the numbers with the players and I found myself using that all the time yesterday. Guess I'm a little rusty.
Branden Albert, missing from morning the walk through, was back in the afternoon. I saw No. 76 out there and thought it must be someone else who shares Albert's number because he was gone. After a roster check, I realized it was indeed Albert.
Jacques Reeves, who was missing from the morning walk through, was missing in the afternoon practice. Romeo Crennel called it a personal issue. 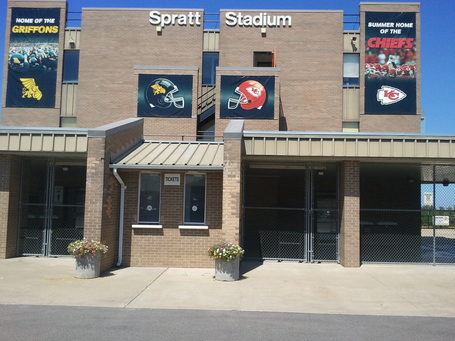 First team offensive line: LT Branden Albert, LG Ryan Lilja, C Rodney Hudson, RG Jon Asamoah, RT Eric Winston.
The first team offensive line is what we expected. Jeff Allen, the rookie, is getting time at both guard and tackle.
The defense:
Toribio...your starting nose tackle. For now, at least. Dontari Poe will eventually take over, at least that's my guess, but Toribio's your man right now. It's OK to admit you almost forgot about Toribio being on the team. He came from the Packers a couple years ago and most of his KC time has been on the practice squad. That could change this year.
Safety is a new look this year, too. Abe Elam is back there along with Travis Daniels. With Berry's return, there are a lot of new faces there.
Strangest formation of the day had Tony Moeaki out wide, Kevin Boss in the slot and Dexter McCluster on the other side. It'll get weirder once Wildcat stuff comes out. 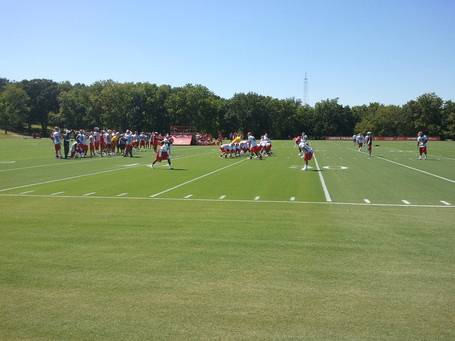 Best jersey of the day: Derrick Thomas. I know, one of the most popular jerseys, but a little kid, maybe 4 or 5, was wearing it. Those are some cool parents.
Eric Berry was out there and seemed fine. He was wearing a red sleeve down one of his arms. Looked pretty awesome. Almost but not as cool as the red socks on the Halloween game against the Chargers. 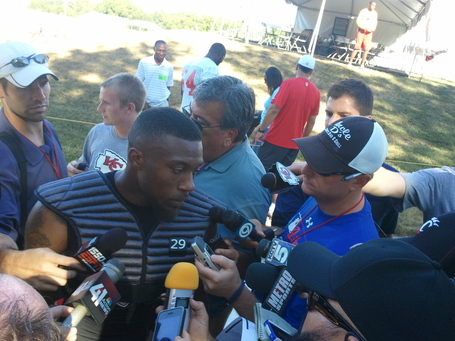 Eric Berry said the conditioning test was easy. "I knew I was going to pass."

Ropati Pitoitua, the free agent from the Jets? That's a huge man. He's listed at 6'8 and 315 pounds and I'd bet he's every pound of it. He's challenging David Mims for biggest man I've ever seen in person.
Second team offensive line: LT Donald Stephenson, LG Jeff Allen, C Rob Bruggeman, RG Daryl Harris, RT David Mims.
Stephenson, Mims, Tony Ugoh...that swing tackle is going to be a competitive position. Any way they can keep four offensive tackles?
Matt Cassel tried to hit Jonathan Baldwin on about a 10-yard comeback route and Routt was quick to jump on it and knock the ball down.
Javier Arenas caught my eye a few times breaking up passes. He was running on the second team at cornerback. We also consider him the favorite for the slot corner job.
Cameron Sheffield looks really big. Maybe it's just been a while but he sure seemed bigger to me. This would be a nice year for him to contribute.
Prediction: Devon Wylie will be a camp superstar. He moves like McCluster, who is also an offseason superstar. I saw him catch one pass on a quick little out route and the second he caught he stopped on a dime and spun up field. Just a minor move that probably wouldn't matter if this were full contact but it really showed his quickness.
Hard to tell apart: Jamaal Charles, Dexter McCluster and DeQuan Menzie. From a distance at least. They all have dreadlocks about the same length. 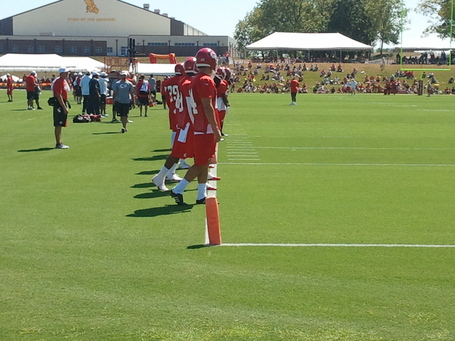 Those returning kicks: Dexter McCluster, Devon Wylie and Steve Breaston.
Cassel went deep to Moeaki on a play-action and it looked oh-so perfect but it was less than a foot too long and slipped past his fingers. The coaches were working with Moeaki on making hard cuts and selling the route.
Baldwin, lined up wide on the left side of the field, runs a route across the middle and Cassel hits him in traffic. The defender slipped so Baldwin had just the safety to beat for a touchdown. At his size, I like his chances against a safety.
Weather-wise, it was a very pleasant day. High 80s with a little wind. I could live with that weather. Speaking of weather, some of the bleachers have been replaced by....shade tents! 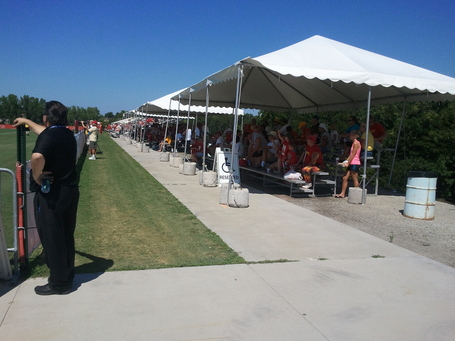