Share All sharing options for: Larry Fitzgerald Ready To Go Camping In KC 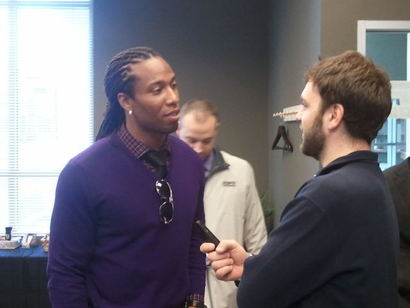 Larry Fitzgerald and the Arizona Cardinals are coming to town to visit with the Kansas City Chiefs during training camp and, like most folks that visit KC say, he's looking forward to some of that "world famous bbq". And, no, he's not talking about the famous brisket I smoke in my backyard.

He's talking about some of the places the baseball media visited last week.

@bstrackstar So are we hook us up and bring us some of that world famous bbq to eat between practices show us that Missouri hospitality. Lol

The Chiefs and Cards will be practicing together on Tuesday, Aug. 7 and Wednesday, Aug. 8.

The person who wrote this tweet, @bstrackstar, actually contacted me and asked if there was some sort of fund he could donate to in order to bring them some barbecue to St. Joe. I'm sure the Chiefs have that taken care of but it shows Chiefs fans are pretty much the best (unless you're a Raiders or Broncos fan. Chargers? Eh.)