Theorizing the Defense: The 3-4 Eagle

Share All sharing options for: Theorizing the Defense: The 3-4 Eagle

Hello again, Chiefs fans! Last week, I took at look at the modified 3-4 over for the first part of a series of posts addressing some alternate formations and tweaks to the standard 2-gap 3-4 that Romeo Crennel currently runs. These posts aren't necessarily trying to replace the base defense, merely addressing some ways with the current Chiefs personnel that could play to strengths or exploit certain offenses.

Fritz Shurmur came upon a dilemma in the mid 1980's when the Los Angeles Rams drafted a guy by the name of Kevin Greene in the 5th round. The Rams played a pretty traditional 3-4 defense at the time, with the occasional 46 defense thrown in. At the time, Kevin Greene was a big, quick body who wasn't quite big enough play defensive end, but wasn't going to take a starter spot away from one of the outside linebackers. He wasn't good in coverage, but he got to the passer well enough...as long as it wasn't against one of the bigger offensive tackles. Shurmur was well known to be an innovator of defenses, and had tossed around several modified nickel defenses, toying with a 2-5 front. With Kevin Greene in the fold, he came up with the 3-4 Eagle. 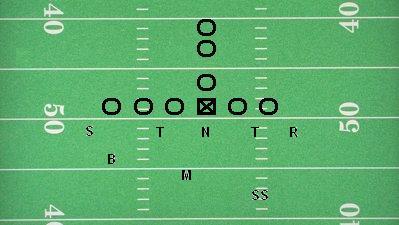 Looks harmless enough, right? Not too terribly different from a 2-gap 3-4? Now, what if I told you the nose tackle in that picture isn't a lineman? He's a linebacker.

N - The Nose Backer. Kevin Greene absolutely destroyed fools from this position until he finally claimed the starting outside linebacker spot. This guy is built like a defensive end in a 4-3, but is better suited taking on a smaller, shorter armed player that is likely slower than an offensive tackle. Sometimes he drops his hand in the dirt. Sometimes he is standing. He can rush the passer, try and knife through to get to a running back, or drop into a short zone. As unpredictable as a nose tackle is in a traditional 3-4, the nose backer is twice that. An offense can't try to game plan around the nose backer because you're never sure which gap he's shooting, if he's even shooting one at all.

T - The Tackles. These guys are going to play like a true 3-4 defensive end does. Eat the tackle and the guard as much as possible and form a wall against the run, or shoot the "B" gap against the pass. For further description on their responsibilities, read the 3-4 Primer I did awhile back.

R - The Rush Backer. Speed, power, and pass rushing moves are this guy's forte. Throw him into the backfield to try and stop the run behind the line, or take the reigns off him and tell him to go get the quarterback. This linebacker is always on the weakside of the defense. As Tamba never comes off the field (and for good reason), this spot is all his.

S - The Strongside Edge. A bigger linebacker who is able to get to the quarterback and stack well against the run. Contrary to a 3-4 strongside outside linebacker, coverage is not all that important to this linebacker, and he is always located outside of the tight end in a single TE situation. His job is to set the edge on rushes to his side of the field, and to simply get to the quarterback in passing situations, unless the running back moves into the flat, in which case he assumes responsibility.

M - The Mike Backer. Even though this linebacker plays more in the center of the field, he doesn't need to be a hulking bruiser of a linebacker. He is completely read and react, shooting the opposite "A" gap of the nose backer on runs up the middle, or flowing to the "C" or "D" gap on runs to the outside. He and the strong safety (SS) work in tandem to stop the run, much like the traditional 3-4 inside linebackers do. Both positions (M and SS) have to be both strong against the run and the pass, making sure tackles and using their man coverage skills against the tight end(s) and running back.

B - The Backer. No, seriously, that's what the Rams called him. This guy lines up standing, but head-up with the tight end all game long. He completely mirrors the TE, and is responsible for gaining leverage on the outside against the run. If the S linebacker instead grabs the TE, the B's responsibility then becomes outside contain. This player can be a bit smaller, as he's not being asked to do much more than cleanup against the pass, holding onto the tight end, or dropping into coverage against the tight end. Some teams utilize safeties in this position.

I'm not going to post diagrams of these plays occurring, because the entire 1985 LA Rams Eagle 5 defensive playbook has been posted online. So check that out sometime...there's a lot of information in there, and with far more inventive ways to utilize the defense against every formation you can come up with. However, there are some spots that certain players would have locked down. Tamba, DJ, and Houston would hold the assumed normal positions. A guy like Arenas or Menzie could play the "B" spot, which is similar to the hybrid LB/S we played quite a bit last year, only with a far more defined role. The tackle spots can vary, putting Jackson and Dorsey on the field in their normal spots, but in truth, any combination of Jackson, Dorsey, Poe, Bailey, and Gordon can play those spots, depending on how big/small the situation calls for. The issue: Who plays nose backer? Is Belcher strong/quick enough? Studebaker? Cameron Sheffield? Or would you try to coach up Bailey to play in space? That's the difficult question, for sure.

Positives: Unpredictable. Four players that will rush the passer on every down, and four more that are close to the line that are quick enough to get a good blitz. Pass coverage is strong all over the field. Playmakers are free to pursue the run/pass in the ways that they already do it well. Already rushes more players than last year's Chiefs defense on every play. Stronger against the run than the usual sub package from last year. Lots of flexibility from the tackle position.

Negatives: Weaker against the run than base 3-4. Asking DJ, Berry, and Tamba to do an awful lot to stop the run. Who plays nose backer? Can get spread out, creating some mismatches. Two positions for five defensive tackles to rotate through, minimizing impact some can have on the game.

What do you think? Do we have the players for this? Who plays nose backer?