Peyton Hillis Pulled A Truck Down The Street Today

Share All sharing options for: Peyton Hillis Pulled A Truck Down The Street Today

While you were sitting in your office or doing whatever it is you do to put food on the table, Peyton Hillis was pulling a truck down a side street in Leawood, Kansas today.

Yep, I mean actually pulled the truck (via KC Star): 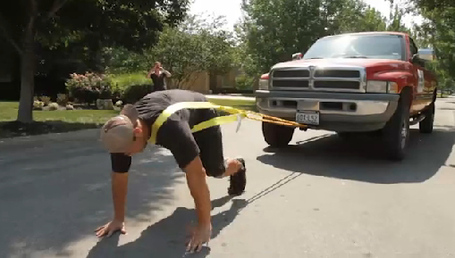 This is already giving me ideas for a float in next year's St. Patrick's Day Parade in Brookside.

The KC Star was on the scene and there's this "raw video" (TV term) from them. Yeah, it wouldn't be as hard once you got the truck moving but that's still damn hard to do. And imagine if you lived on that street. Be kinda weird, huh?

It's also not the first time Hillis has done something like this. See what the Google search "Peyton Hillis pulling truck" comes up with.