Theorizing the Defense: The Philly-Fairbanks

Share All sharing options for: Theorizing the Defense: The Philly-Fairbanks

By now, most Chiefs fans recognize Romeo's standard 3-4 defense. It's a 2-gap, Fairbanks-Bullough designed system that he has run for years in New England, Cleveland, and Kansas City. He knows it inside and out, and he knows how to identify players that are best utilized in this system, and how to get the best out of those players.

So naturally, I'm writing posts about how we can change it.

With the doldrums of the offseason settling in, I'd like to examine some options that the Chiefs could reasonably utilize (but likely won't) to try to exploit the abilities and strong traits of the front seven. I know, Romeo's not changing, but let's have a look at some defensive schemes. Today's option: a modified 3-4 Over (or, as I'm calling it: the Philly-Fairbanks 3-4)

When Bum Phillips came out with the 1-gap 3-4 defense, it seemed that he was utilizing the Fairbanks-Bullough 3-4 and shifting into over/under packages. It was obviously more complex than that, but shared a number of similarities. In truth, Bum just didn't have the players to do the traditional 2-gap scheme. Straight from the man's mouth:

"Coaching is pretty simple really. If you don’t got something, find something you do got. Really, we didn’t have but one [defensive lineman] – [Hall of Famer] Elvin [Bethea] – until we got Curley [Culp] in the middle of that season. Then we had two. What we did have was four real good linebackers, so all I done was find a way to get our best players on the field." - Bum Phillips 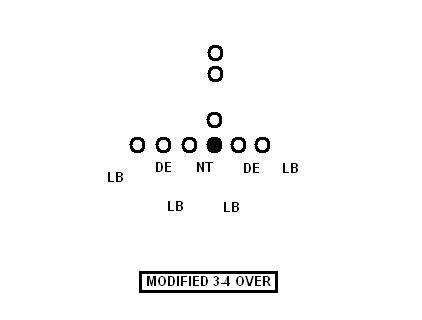 As shown in the above diagram, the nose tackle (Poe) would be shifted to a 1-tech position via the strong side. The weakside defensive end (Dorsey) becomes a 3 or 4-tech, and the strongside defensive end (Jackson) stays as a head-up 5-tech. However, to make this work in my mind, the weakside outside linebacker (Tamba) needs to press forward at the line. He can stay very wide, as shown in the diagram, but with Dorsey no longer playing head up on the tackle, I feel the defense needs to have someone up in there to get some sort of edge set. 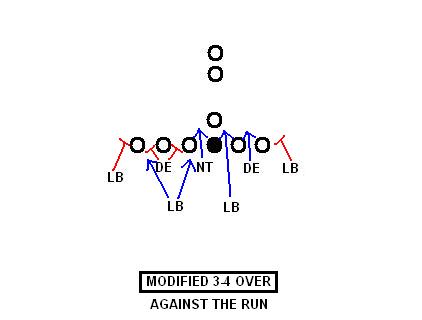 Against the run, you can see that Tamba is going to set the weakside edge, and Houston will set the strongside edge. This is obviously dependent on the offensive blocking scheme, but with both Houston and Tamba crashing the edges, and since both have the speed for backside pursuit, chances are good that the offense will utilize the left tackle and tight end to try to nullify their advances. Jackson will hold down the fort much like he currently does, using his lateral quickness and anchor to form a wall on the strong side of the defense. As this part of the defense is largely unchanged, the positives that come from that stick with this defense. As far as nose tackle and defensive end are concerned, however, the scheme changes drastically. No longer are you asking Dorsey to hold his ground against a double team. Instead, his job is to try to penetrate past the guard/tackle combination and disrupt in the backfield. Poe, as well, will be asked to penetrate and disrupt in the backfield. Ideally, these two will either get through the line or force an extra blocker to help. That's where DJ and Belcher come in. Belcher will be asked to be less of a block eater than he has been, instead taking responsibility for the two gaps in front of him. This reduces his decision making, and helps him get into the play quicker. DJ gets to keep doing what he does best: read and react. If he has a lineman that gets to him, Dorsey or Poe should be able to get into the backfield for the stop. If those two get doubled, then DJ is there for the play. 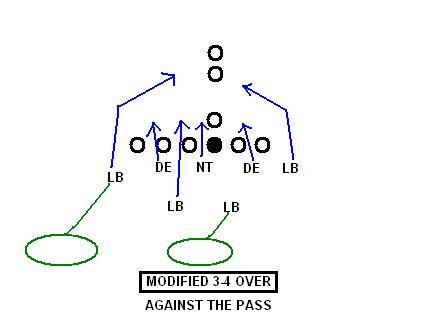 This is where the defense hits its sweet spot, in my opinion. When the base defense gets caught on the field in a passing situation, there are only a few small changes from the run defense. Jackson pushes forward to try to collapse the pocket. Houston identifies the tight end and whether or not he drops into coverage. DJ is still read/react, and will identify the running back or drop into the short zone coverage. Finally, Belcher blitzes or runs into the flat with the running back. Tamba, Poe, and Dorsey just have to keep trying to win their battles and make things happen in the backfield. Normally, when the base defense is caught out on the field in these situations, there is little pressure on the QB. Based on the two one-gap players crushing the middle of the pocket, Tamba's relentless pass rushing, and one of Belcher or Houston blitzing, there SHOULD be plenty of pressure, even if there is a late identification of the type of play being ran.

Positives: Simplifies the defense. Puts players into advantageous positions without sacrificing current strengths. Theoretically more pressure against the pass. Allows Poe to be contributing on the field immediately while learning 2-gap techniques off the field. Puts Dorsey in the 3-tech position he was originally drafted for, but doesn't eliminate his positive contributions that he brings to the 3-4 defense. Allows Belcher to play quicker, which is when he's at his most destructive. Still features Tamba, DJ, and Houston as the playmakers.

Negatives: Weakside run defense can get washed out quickly against better offensive linemen. DJ could end up seeing more offensive linemen in the second level. Completely reliant on the capabilities of two players, one who hasn't played an NFL snap yet. Could leave big holes in the center of the field if both Dorsey and Poe overpursue. Predictable.

Ideally, the run defense becomes a penetration-based system, which based on the runs over the weakside of the Chiefs defense last year, could help force the opposition into 2nd/3rd and long situations. Then again, the margin for error becomes ridiculously slim. It does help that the same principles are executed for both the run and the pass, meaning Dorsey and Poe just have to beat their men all game long...similar to what Calais Campbell and Haloti Ngata are asked to do, and why they are on the field all game long. However, the risks appear to be minimal from a player strength perspective, while making the potential from the NT and weakside DE through the roof.

What do you think, AP?