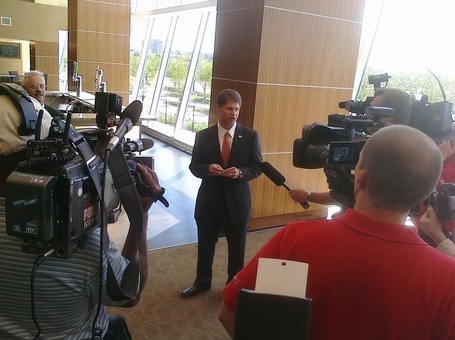 Kansas City Chiefs chairman and CEO Clark Hunt seems to be getting it. He can't step out of his father's shadow by being consistently invisible. He can't be the owner he's capable of being if he's always letting others be the face of the franchise. At some point, Hunt had to steal a few moves from the more progressive owners in pro sports. That he's doing so now shows how far he has come in a relatively short time.

Clark Hunt Forging His Own Path from ESPN

What's in a number anyway?

Apparently a lot when it comes to the Kansas City Chiefs.

In Kansas City, some numbers are officially off-limits. Other jerseys are "unofficially retired." Then there is a third group of numbers that many people believe should be retired.

Offseason Notebook: What's In A Number? from The Mothership

Rebuild Joplin works to construct housing for people whose homes were destroyed. It seeks donations and volunteers.

Missouri Gov. Jay Nixon is getting involved by spearheading the Joplin Challenge in association with Habitat For Humanity. The challenge needs donations and volunteers to help build 35 homes to contribute to the city's recovery. Volunteers can also join players from seven local sports teams -- the Kansas City Chiefs and Royals; the St. Louis Rams, Cardinals and Blues; the University of Missouri Tigers; and Kansas Speedway in association with NASCAR Unites -- and build alongside their team.

Rebuilding Joplin A Year After Tornado from CNN

Stephenson (6-6, 312), an offensive tackle out of Oklahoma, is the seventh of Kansas City's eight draft picks to sign a rookie deal. The club's only remaining unsigned draft pick is first-round selection Dontari Poe.

Rich Ranglin, an offensive lineman for the Central Connecticut football team in 2003-07, has signed a contract with the Kansas City Chiefs. Ranglin has been a standout in the Arena Football League the last few years.

Tom Pincince of Central Connecticut has all the details here ...

Berry's first camp will take place this Saturday in the Kansas City area at Lee's Summit High School. The cost is $99 per camper with all proceeds benefitting the Eric Berry Foundation.

Eric Berry Hosting Football Camp In Kansas City On Saturday, May 19th from The Mothership

Albert is heading into the final year of his contract, but there have been reports of contract talks between the two sides. That would work out well as Stephenson has the size for the position but probably needs a little more seasoning before he'd be ready to fill it.

Dontari Poe Is The Lone Unsigned Chiefs Pick from ProFootballTalk

...Rosenhaus spent much of his time on Thursday finalizing a contract for Eagles running back LeSean McCoy. Since Rosenhaus finished the job by going to Philly and because he specifically said that he's "on my way" to visit the mystery team, it doesn't take an advanced degree in astrophysics to conclude that the Eagles are the mystery team.

Yeremiah Bell "Mystery" Should Be Solved Any Minute Now from ProFootballTalk

The 34th Annual HK's Hospital Benefit Golf Tournament will be held June 1-3 at The Lodge of Four Seasons...

...One of the highlights of this year's event is the Pairing Party and Silent/Live Auction, held 5 p.m. Saturday, June 2, in Campana Hall. Participants will have the opportunity to meet former Kansas City Chiefs Fullback Tony Richardson, honorary chair of this year's tournament.

Immediately following the final round of the NFL Draft in April, Davis signed with the Jacksonville Jaguars and Fanor with the Kansas City Chiefs. Lewis joined the club this month when he signed a deal with the Miami Dolphins...

...Said Fanor, "It is still surreal and hasn't hit me yet. I am grateful for the opportunity to play at the next level. Without God, I couldn't be here."

Dwayne Bowe is one of the most consistent targets in the NFL despite not playing with anything close to an elite quarterback. Bowe's 1,000+ yards in 2011 is every bit as impressive as Larry Fitzgerald's numbers, considering his situation.

The speaker is Lewis Colbert, Auburn's starting punter from 1982-85 and 1985 All-American. Colbert finished his career as Auburn's record holder for career punts and career yardage. He later went on to punt for the Kansas City Chiefs and the San Diego Chargers.

Colbert recently wrote a book, "Lewis Colbert: The Unlikeliest Auburn Tiger," describing how he overcame being born with a club foot and his career at Auburn.