Share All sharing options for: Derrick Johnson Comes In At No. 78 In NFL Network's Top 100

The first Kansas City Chiefs played landed on NFL Network's Top 100 last night. 44 percent of you yesterday predicted in our poll that it would be LB Derrick Johnson and, indeed, DJ was the one. He was selected as the 78th best player in NFL Network's vote by current players of the top 100 players in the league.

DJ comes in one spot ahead of Nnamdi Asomugha and two spots ahead of Jordy Nelson. Not bad competition. He did not make the list last year for some reason.

Those talking about DJ's skills included Thomas Jones, Vonta Leach and Brandon Flowers. I transcribed what those guys had to say about DJ. Look for Thomas Jones to explain why DJ has a tendency to piss him off.

Thomas Jones: One of the most underrated players in the league. I played against him when I was with the Jets. Always seems to be around the ball.

Vonta Leach: Derrick Johnson from Kansas City. I think he'd get a lot of publicity or somethign but he's a great linebacker, he's one o the toughest ones I"ve gone agains. He's all over the field and makes a lot of plays, whether it's in the run or pass. He never quits, he always plays 100 percent. 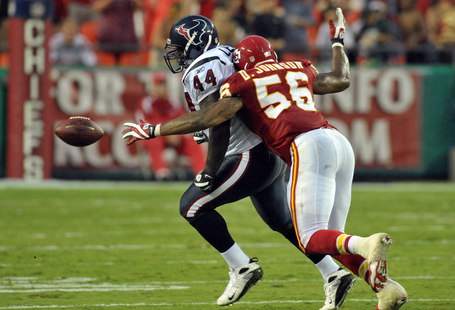 Jones: He has a lot of ability as a pass rusher so you're not sure if he's using his quickness to go around you or bullrush you and go through you. Whether it's grabbing your league, getting an interception, knocking the ball down, he has great instincts and is always around the ball. He kinda pisses you off because he's always in the hole somehow. Even if he's blocked, somehow he ends up spinning off a block, or ducking under a block.

Jones: Being on the same team I see his demeanor. He's not one of those vocal guys but the fact is he's a leader.

Brandon Flowers: Dropping into coverage, picking off balls, blitzing the quarterback, highlight hits. He's definitely a spark to the defense. Once he makes one play, the defense feeds off it.

Jones: For me to have the opportunity to play with him here the last two years, I can see why he's been one of the top linebackers in the league. Ray Lewis, Patrick Willis, he's just born with those kind of instincts.

Here's the video of the segment.