Dontari Poe Had Better Seats Than You Last Night

Share All sharing options for: Dontari Poe Had Better Seats Than You Last Night

Kansas City Chiefs first round pick Dontari Poe took a night off to attend the NBA playoffs. Poe and his agent, Jimmy Sexton (based in Memphis), watched the Grizzlies beat the Los Angeles Clippers, 92-80, from what might be the best seat in all of sports -- court side.

Several folks on Twitter dropped screen shots of Poe at the game and I collected them here because I didin't watch the game last night. I am so out of touch with basketball that I had to confirm the Grizzlies were still located in Memphis..

A couple of pictures, and a few more Tweets after the jump: 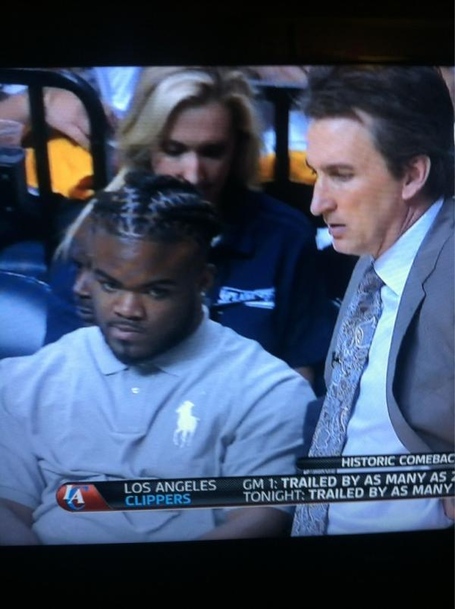 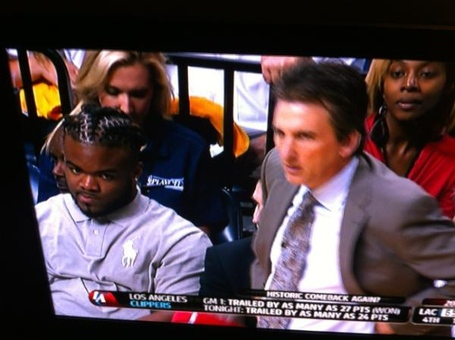 And here are a few other Twitter comments from people seeing Poe on TV. The first one comes from Sean Tuohy Jr., the kid in The Blind Side (Ole Miss ties).

good meeting big Dontari Poe tonight. Joining my boys dexter, Kendrick and Powe out in KC. Wish him the best!

Dontari Poe in the front row still rocking those big man polo with da silver house lmao... Nfl checks must not have hit his account

Dontari Poe courtside must be nice being a first round pick

If Dontari Poe plays as mean as he looks....#trouble #trouble

Dontari Poe sitting sideline. Wonder what kinda watch he got on this time