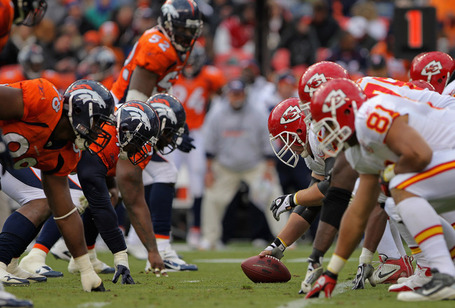 For now on, when people will think about the AFC West, they will automatically think about Peyton Manning and the Denver Broncos. Well, that is what should be expected, when one of the greatest players to ever play in the NFL joins a different division, and becomes the face of the franchise. But do the Broncos have the AFC West wrapped up? Are they already the winner of the AFC West? No. At least to me, the AFC West is still very wide open, and any one of the 4 teams can take hold of it, and get into the Playoffs. But two particular teams catch my attention, as the two front runners in the AFC West.

I think the Broncos, and the Chiefs are the two teams who have the best shot at winning the division.

The Broncos, who are the favorite to win the division, would be doomed if Peyton Manning was to get injured, since they only have Caleb Hanie as their backup, and he showed that he cannot take over a team, even if they already have a winning record, and had a spot in the playoffs. But when Manning is healthy, which he is expected to be, the Broncos have a good, up and coming #1 WR in Demarious Thomas, and then they also have Eric Decker at the #2 spot. That doesn't sound like a great receiving corp, but Peyton Manning is known to make average receiver look like good ones, so I think they are all set there. Last season with Tim Tebow at the helm, the Broncos had a terrific running game that gave defenses fits week in and week out. Now that Tebow is gone, the Broncos should still be able to maintain a strong running game, with Willis Mcgahee, and Knowshon Moreno. Plus, they won't be asked to light up the AFC in rushing yards and rushing TD's, because the Broncos will likely be a pass-happy offense. Their defense is also strong, but they do have an aging secondary lead by Champ Bailey. His production is decreasing, but he has still been able to shut down some of the best WR's the NFL has to offer. With Von Miller returning for his 2nd season after earning the rookie of the year award, Denver should once again have a good pass rush, and be good at stopping the run also. I expect the Broncos defense to only improve from last year. So, the Broncos are the favorites to win the AFC West for good reason, but if Peyton Manning goes down, theyare doomed. And if you have followed football in the past 10 years, you will know how serious neck injuries are, and the scary thing is for Denver, is that their $95 million QB could go down on one hit.

Next up, the Chiefs. Although KC hasn't lit up the free-agency market with signing the big name players, and top tier players at their position, they have slowly but surely filling a lot of their biggest needs in free-agency. By signing Peyton Hillis to go along with Jamaal Charles, Scott Pioli has given the Chiefs arguably the best running game in the NFL...........on paper. The Problem is, for them to have a successful running game, both players would have to revert back to 2010 form. Last season, Charles went down with a torn ACL, and Peyton Hillis was missing games for silly things, such as a strep throat, and there was major tension between Hillis and the fornt office to get a long-term contract done. Jamaal Charles is ahead of schedule on his ACL recovery and rehab, and is expected to return to his normal self in 2012. Peyton Hillis, who will likely be more productive this upcoming season on short yardage plays, should be a great addition to the Chiefs offense. Hillis is great at running in between the tackles, and will get you a touchdown at the goal-line virtually any time you want. The Chiefs are a little shaky at QB with Matt Cassel, though. Cassel was unsuccessful in his 1st year as a Chiefs, but then in 2010, led them to the playoffs, by throwing for 27 touchdowns and only 7 interceptions. But then in 2011, before suffering a broken bone in his hand that ended his season, Cassel was not making the throws and plays that you expect out of your starting QB. The question is, which Matt Cassel will show up for the Chiefs every Sunday? The 2009, and 2011 Matt Cassel? Or the 2010 and 2008 Matt Cassel? I think he will be somewhere in between. With Dwayne Bowe, Steve Breaston, and Jonathan Baldwin at WR, Tony Moeaki at TE, and a strong running game, it should be hard for Cassel to fail this year. I expect Cassel to have a decent season, not 2010 caliber, but not as miserable as 2011. This offense has tons of potential, with all of the play-makers. From Bowe, to Charles, to even McCluster, who could be very explosive if given the ball at the right time. The D? KC had a strong consistent defense last year, similar to Denver's. It kept them in the game almost every week, and towards the end of the season, was shutting down offenses like the Steelers, Packers, and Broncos. Derrick Johnson had his career year, by earning himself to the Pro Bowl along with Tamba Hali, who once again was the Chiefs leading pass rusher. The Secondary should be just as good as last year, even though they have lost Brandon Carr. Stanford Routt should fill in fine, or even better, depending on how he plays in the new scheme, and if he can return to his 2010 form. With a good draft, and a healthy Eric Berry (Torn ACL), the Chiefs should be alright on that side of the ball.

All in all, I realistically expect the Chiefs and Broncos to be very close with each other within the division. Also, don't count out the San Diego Chargers, who have lost Vincent Jackson and Mike Tolbert, but have added major depth to the WR position. It'll be interesting, that's for sure. But what do you think? Who will win the AFC West? Share your thoughts in the comment section and make sure to vote!

Who do you realistically think will win the AFC West?