Word up APers. I need you all to do me a little favor. Now, if you're alone or at home, turn your speakers up nice and loud. For those stuck in cube life, like me, look around and make sure no maddoggers are close by. Grab your headphones for a minute, plug ‘em in, push play on the YouTube link below and sing along with my jam...

Now let me welcome everybody to the wild, wild west
A state where the Niners are the proven best
Harbaugh jumped from Furd for his NFL quest
Watch out for trannies in the city of dude breasts
The Niners are up with their bomb ass line beef
A team where ya never see that dope run game beat
And Coach be on a mission for them rings
Lean mean tackling-machines makin' it sting
I been watchin' ball for 20 years makin' Mock Drafts
Ever since I's at Meadow Lane bakin' art crafts
Now it's 2012 and haters try to doubt me
Call out my Pac-12 bias, blame my Berkeley Degree
It's all good, from San Jose to tha Bay
The coach is a Stanfurd b----h, just like that douche Elway.

Coby Fleener, let's get hyphy if ya feel the same way
Tedford puttin' it down for
Californ-i-a 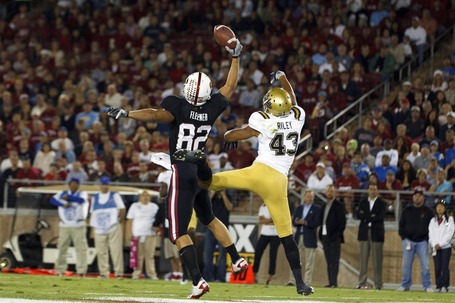 Here's the word, he's outta Stanfurd, California dreamin'
Soon as he stepped on the field, he's hearin' safeties screamin'
Whinin' ‘bout his size and his great hands
Growin' up with Catholic high school and private college were the plans
The Silver Spoon helped him focus, so Jimmy wants him on the clan
In San Fran we drinkin' Kool-Aid not Boulevard booze (that's right, uh)
Dressed in tight jeans and hipster V-necks is what we do
We hyped but have caution because A. Smith brings the boos
Fleen knows the system since Harbaugh was his coach
He's smart and will catch on fast to their approach

So Arrowhead Pride please let me broach...this draft subject
The Niners lookin' to the Farm figurin' who to poach.
Say what you say
He's too lean, SF'll say "no way"
But lemme advise the City by the Bay
From Napa to Santa Cruz
Da Bay'll, no doubt, leave you with a bruise