Ramblings of an Idiot: Are We There Yet?

Share All sharing options for: Ramblings of an Idiot: Are We There Yet?

As a child all the family vacations I ever went on took place in a car or van. Dad would load up the trunk with mismatched luggage while Mom stuffed baggies with various sandwiches, chips, fruit and treats. Ice tea and coffee filled multiple avocado green thermos's (the real stuff, sans disgusting sugar). If my sister and I behaved ourselves we might even get a Coca-Cola at some point in the journey. Needless to say, I never got a Coka-Cola. Not even one time ever. But once, I was hung out the window of the car by my ankles while traveling 55 MPH down the highway because I wouldn't stop mouthing off to my father while he tried to sleep in the passenger seat.

Now before you call child protective services on my parents you've got to understand something. The rear seat war started because I took a handful of coins out of my pocket, set them up in the back seat window-dash for a hundred miles until they were blisteringly hot, and then started tossing them onto my sisters bare legs. And thus began the screaming, crying, punching and kicking that kept my father awake. When he turned around to yell at me I yelled back a few choice words that I'd heard the grown ups saying in the past. I deserved what i got. I knew it. They knew it. And it worked too. I hardly said another word for the rest of the fourteen hundred mile trip to Grandma's house. I say "hardly" because there's one question that no child can resisted asking at least a hundred and fifty times during a long road trip: "Daaaaaaaaaaaad, (in a whiny nasal tone) Are we there yet?"

It's early April. September is further away than I'd prefer to count. At this point the continuous rehashing of various draft talk subjects and player evaluations has driven my into a state of semi-depression. I cannot believe football season is still so far away. And as much as I'm pining away for the NFL draft to begin, if only to break the monotony, when those three days are over we're in for a very long haul before we arrive at Grandma's house. So I ask you Chiefs fans in a whiny and nasal voice: Are we there yet? 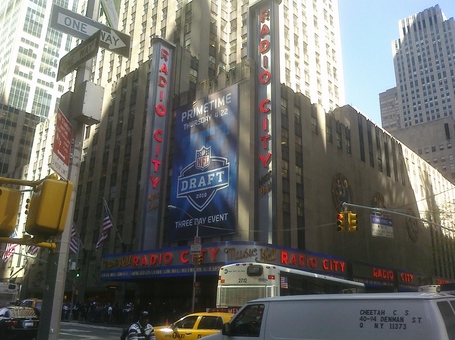 At this point I still have the draft to look forward to fondly, but soon there will be naught but months of empty nothingness separating my love for football from actual meaningful football games. Taking player injury risks and watering down of rosters out of the equation, I'd love nothing more than a thirty game regular season. Each AFC team could play two games versus every other team in the conference. Instead of seventeen weeks of regular season football we could have thirty-two glorious weeks before the playoffs began. By the time the Superbowl champion was crowned there would be only a four month break before it started up again. That's one month of coaching hires and firings, one month of free agency, one month of draft speculation ending in the draft, and one month of training camps preparing for the next season. Take a moment to think about how glorious that would be. We'd be starting up the next season in June. At this very moment we'd only six or seven weeks removed from real NFL football. Dad........Are we there yet?

I'm all in favor of the eighteen game schedule, or twenty, or twenty-four. Whatever it takes to stop me from tying medical-grade rubber tubing around my bicep in preparation for an NFL injection would get my vote. Baseball sucks! Yes, I said that. Baseball is no more America's pass-time than borscht is it's favorite meal. Someone call Japan and tell them they can keep baseball. We don't want it any more. We just want football to begin. Are we there yet?

Eric Berry is a stud. Matt Cassel is not very good. The Chiefs have put together a complete team. The Raiders are a bunch of bumbling doofuses (doofus's ? doofus' ? doofui?... whatever). Go ahead, say them with me if you know them. In Pioli we trust. We're building the right 53. The Chiefs will win the division in 2012. We need a nose tackle. Another rusher or corner are better value in the first round. All the Chiefs need is a QBotF. Just say no to Tannehill. Clark Hunt is a cheapskate. We should draft five nosetackles, four wide receivers, and three offensive guards..... have I missed any? Oops, sorry Upamtn.....DECASTRO! Round and round the off-season spins like the balding tires of a '81 Mercury Lynx wagon loaded down with a family headed to see the biggest ball of twine in Minnesota. (It's an actual place, see for yourself). We repeat and rehash the same discussions over and over again. Daily, die hard Chiefs fans return to Arrowhead Pride in a desperate search for some tiny little tid-bit of actual football news. The football monkey on our backs gets heavier with each passing day. For me, the shakes of withdrawal will set in as April comes to a close. By the time August rolls around I'll be so strung out and desperate that I'll end up actually watching a pre-season game from start to finish........ Dad, Are we there yet? 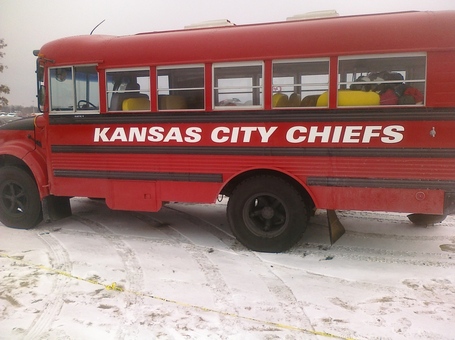 I guess I'm not helping much. There is no Chiefs news to be found in this post. There's no discussion of the team or it's A+ off season grade. Heck, until now I haven't even mentioned that we replaced Barry Richardson. Everyone knows that move alone will put us in the Superbowl. Don't judge me too harshly. I told you in the title that this post would contain an idiot's rambling. In truth, I have spent the last two months watching game tape and laying out play by play down and distance charts coupled with the play calls that are most often used in various situations. It was my plan to present that data here today, before the draft. My plan was foiled by an evil poster that laid out a lot of that information yesterday in a fanpost. So instead I seek out the kinship of my fellow Chiefs fans that are wallowing in the same post-season cesspool that I awaken to every day, and submerge into every night. Is it September? Are we there yet?