NFL Draft: Where Do The Starting QBs Come From?

Share All sharing options for: NFL Draft: Where Do The Starting QBs Come From?

Hype is part of draft season. Every year, hopeful fans clamor for their team to fill its most glaring needs with "can't miss" players. The media fuels the fire by making bombastic pronouncements about the most high profile prospects. The combination leads to incredible hype around athletes who've never played a single snap in the NFL.

But not all hype is created equal. One position inevitably dominates the national headlines: Quarterback. Dissatisfied fans and media alike clamor for their team to trade up for that year's stud QBs. This year's buzz is all about trading up to the No. 2 slot to pick RGIII.

Lost in all the excitement is a breakdown of where starting QBs were actually drafted. This article provides that breakdown by examining the draft position of starting QBs for the 2011 season as well as the most successful QBs over the last few years.

A few clarifications before we dive in:

Distribution by Draft Round

The chart below shows the distribution of the starting QBs across the draft: 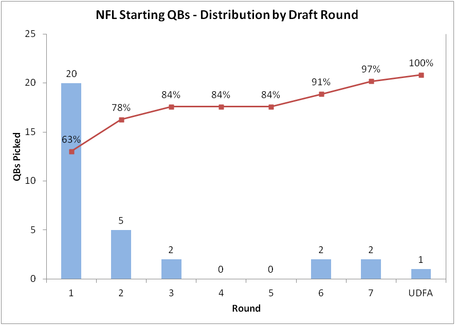 As expected, starting QBs are primarily drawn from the early rounds. Just 12 of the starters were found outside of the first round and a staggering 84% were picked in the first three rounds. The remaining five starters are almost assuredly teams getting lucky; for example, the Patriots didn't expect Tom Brady to become a future Hall of Famer when they took him with a compensatory pick in round 6. There was a lot of buzz around Romo as a UDFA, but Dallas probably expected him to be no better than a solid backup when they signed him. The void in rounds 4 and 5 is random for the same reason; lucky picks could just as well have happened in those rounds.

There's a significant difference between the top of the first round and the bottom, in terms of dollar cost and trade cost. With this in mind, we can calculate some statistics to get a more precise picture of where exactly in the draft the starting QBs came from.

The mean lands in the middle of the second round, but it's distorted by the four 6/7 round picks (Brady, Cassel, Hasselbeck, Fitzpatrick). The median is more informative. Based on the median, we can see that half the starting QBs come from the top half of the first round. The mode just confirms the common belief that QBs are often chosen in the first round and with the #1 pick.

We can also cherry-pick the best 8 QBs and look at where they were picked. To identify these players, I ranked all QBs by passer rating for the last three seasons:

The top QB list is somewhat different from the list of all starters. Half of the picks come from outside the first round compared to only 37% for the entire league's starting QBs. The mean and median indicate that top QBs are found in the bottom of the first and middle of the second.

What these Numbers Mean for the Chiefs

The main conclusion we can draw from this data is that any team looking for a new starting QB should look to the first two rounds. This result is likely the result of two effects:

It's tempting to say that there's a higher probability of success when drafting a QB in the first three rounds, but we don't actually know that with just this data. We have to look at all QBs drafted in each round and identify the ones that failed to know for sure (which I might do in a future article).

The most encouraging thing about this list is that the median pick for the top 8 QBs is 11 picks lower than for all starting QBs. It should give hope to Chiefs fans who know the team isn't in a good position to get a top QB this year (Luck and Griffin) and is unlikely to move into that position. We can still find a starter (perhaps even a very good one) with a mid-first to second round pick (Ryan Tannehill or Nick Foles).