Share All sharing options for: Ramblings of an Idiot: Crow Eaters & Savants

Draft threads, quarterback debates, positions of need and crazy scenarios galore have been the modus operandi of Arrowheadpride.com 's fanpost section for the greater part of two weeks. Each of us, as individuals, have been fighting to have our opinions and ideas heard about what our Chiefs should be planning for the off season and exactly which players that we should draft or target in free agency.

We all have our favorite positions or players that we rank as the most important to address before the beginning of the 2012 season. We've each gone round and round with our personal web site nemesis or nemiesises? nemeseas? nemeses? Oh nemermind, you get the idea. We argue college statistics, combine measurables, or eye test grades with each other concerning one player or another. Each of us have our favorites and each of us have tried to convince others that we're right, and they're wrong about one player or another.

All the player discussions, article links, and graphed out statistics have even managed to change a few people's minds about what the Chiefs need most. Our individual arguments have separated us into some collective camps concerning the future of our favorite team:

The trade multiple picks for Robert Griffin because he's worth it camp.

The spend all the Hunt's money on a four time surgical question mark Manning camp.

The just give up on the Chiefs and sign some multiple team cast-off neckbearded loser to a long term contract camp.

Or...... one of the many other subsets of Chiefs fans that have formed up to support each other in the comments sections of two weeks worth of posts. One thing we know for sure is that every last one of us thinks we're right and that those that disagree are medically blind to some degree, or maybe just plain stupid. The other thing we know for sure is the truth of this statement: Arguing on the Internet is like competing in the Special Olympics. Even if you win, you're still Anne Retart. (no offense intended to anyone that competes in the Special Olympics)

In that vein of thought I have decided to make this weeks post an open thread of sort. I'll explain after the jump.

At some point last season after an undefeated October, I passed out some Chiefs brand Kool-Aid concerning the possibility to win the division, and the crappiness of Tim Tebow. I went as far as to suggest that the Chargers and Phillis Rivers were on a downward spiral (which I still believe as long as Norv Turner remains at the helm), and that the Broncos were the absolute last team we had to worry about in our bid to win the division. I stated it boldly, in a matter of fact tone. I believed it so whole-heartedly that I brought statistics and logic to bear to convince others that Oakland would be our largest obstacle to make the playoffs. (I will point out that our season ended with a loss to Oakland that eliminated the Chiefs from playoff contention, but mainly I point this out because I'm stubborn and don't like to admit it when I'm wrong).

The Broncos won the division. They also won a playoff game. The team I had penciled in to be the bottom of the pack was instead the leader of the division mired in a three way cluster-fork of a tie that lucked them into a playoff berth. Did I mention that I don't like admitting it when I'm wrong? The Chiefs, by comparison, finished the season at (7-9) and missed the post season all together. A single win over the Oakland Raiders would have caused a tie in the division that would have vaulted Kansas City into the playoffs based on superior talent and coaching of the players and staff, but alas the Chiefs finished one game weaker than the rest of the division. That one game put crow on my diner table. I braised the crow, and then slow cooked it in a crock pot full of chili for 10 hours. It didn't help. The crow was dried out, chewy, fowl tasting, and hard to swallow. The worst part were the feet. Not even a half gallon of hot sauce hid the gamey flavor. 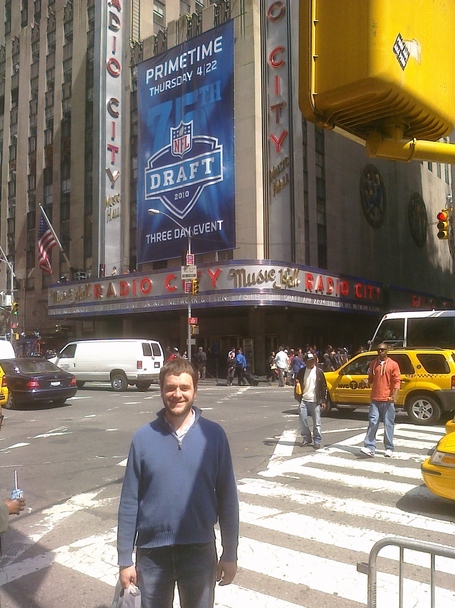 I'm an idiot. I think I may have eluded to that once or twice in the past. I'm SURE that upamtn has done more than merely suggest it. Idiots don't learn from their mistakes. Idiots go right on running their mouths no matter the consequences. And idiots invite others to join them. This idiot is going to make a draft/free agency prediction and post it for everyone to reference until a bunch of other idiot politicians that don't know how to add an attachment to an email decide they know whats best for all of us and destroy the internet. And this idiot is writing today to encourage you to join in the fun.

In the comments I would like for you to make a bold and specific statement concerning something you believe will happen in free agency, the draft, or both. Keep in mind that idiots aren't forward thinking enough to hedge their bets with obvious predictions like 'Andrew Luck will be drafted by the Colts' or 'Dwayne Bowe will remain a Chief'. You should go out on a limb with your future forecasting. No safe bets.

After the free agent period has ended, or shortly before the season begins you will earn your reward or eat your crow in the form of a signature line modification. Those whose predictions come true will add "-Savant" to the end of their signature line. And the idiots that are proved wrong will have to add "-Crow Eater" to their existing signatures. In this way, every Arrowheadpride reader will know which commenters to completely discount for the rest of the year based on one tiny little add-on in their signatures.

1) Cleveland will NOT trade up to the #2 overall pick to draft Robert Griffin III. They will spend their picks improving the overall talent on their team. Matt Flynn or Colt McCoy will be their starting quarterback for 2012.

2) The Washington Redskins WILL trade up to take Griffon and he will have no one of note to throw the ball to. (Santonio Holmes and Mario Manningham are not persons of note imo)

3) Miami will sign Peyton Manning. The Chiefs 2012 opening day starter will be Matt Cassel. (these 2 are tied together. It's all or nothing)

4) The Chiefs will NOT draft Decastro with the 11th overall pick. They will trade down in the draft and select a guard in the second round. (these 2 are tied together. All or nothing)

That's four chances for me to eat more crow. Now it's your turn. Just think how much fun we can have coming back and laughing at one another reading this post and comments for the rest of the year.