As expected the Kansas City Chiefs offense was absolutely miserable without Dwayne Bowe and KC was shut out by the Raiders, 15-0.

Shut out in Oakland. Let that sink in. That's where we're at with this thing. It's the newest "new low" for the Kansas City Chiefs.

The Chiefs didn't even pick up a first down until the third quarter.

There was nothing pretty about Sunday's game in Oakland. The Raiders and Chiefs are both bad. The Raiders were just less bad on this day. If you didn't watch the game, I'd recommend not going back and watching it. Could be hazardous to your health.

Raiders fans were doing what they do before the game -- dressing up in costumes: 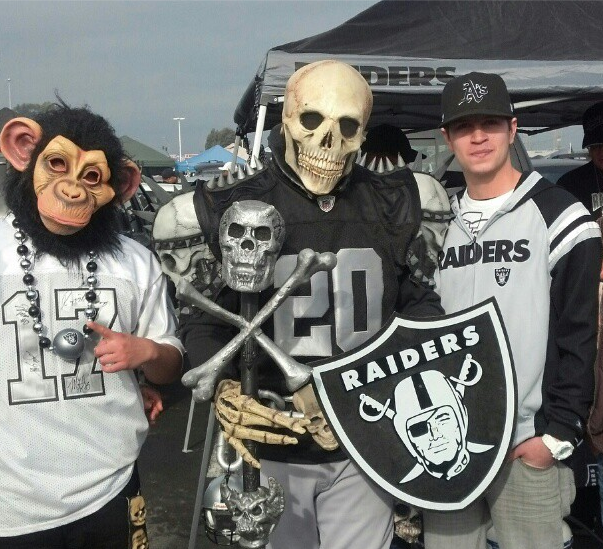 And the field before the game:

Carson Palmer had flu-like symptoms entering the game, which led some to wonder how effective he'd be.

Who's afraid of the potential Jordan flu game out of Carson Palmer today? ...nobody?

The Chiefs started out on defense and almost immediately, all hell broke loose. Jalil Brown and Brandon Flowers collided into each other, with both players going down with an injury. Brown popped up rather quickly while Flowers remained on the ground. He ended up walking off the field under his own power but he was doing so slowly. The Chiefs called it a "chest injury" and he later returned to the game. Flowers was already on the injury report with a hamstring issue. 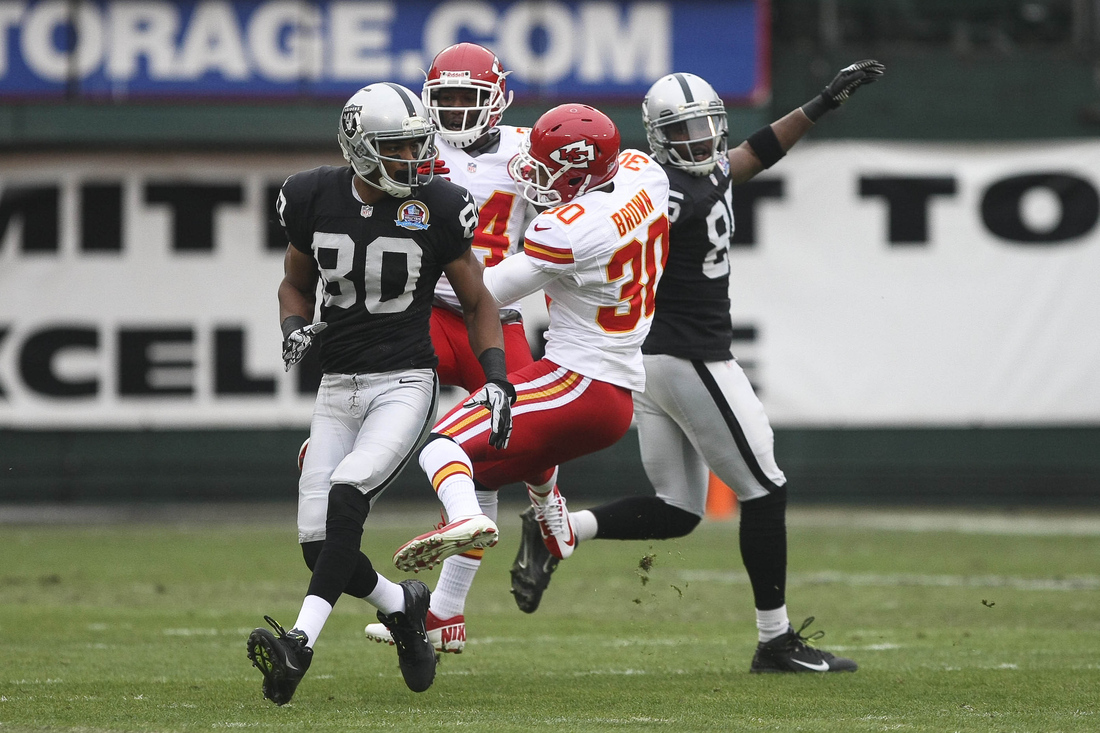 You just knew it was going to be this type of day:

Raiders DT busted through the o-line with no problems, sacked Quinn

Not good when you grab a guy's facemask and he still gets by you for the sack.

Score update: Chiefs 0 Raiders 3 The Raiders drive 58 yards in 11 plays on their second possession, picking up a 20-yard field goal from Sebastian Janikowski.

Or, you can look at that score like this:

The Raiders are treating this game like a lot of 3-10 teams would treat a game like this -- seeing what you have in some of your younger players. Terrelle Pryor started the Raiders third drive at quarterback.

The Chiefs have their first turnover of the game -- Brady Quinn interception. CBS's Solomon Wilcots had a nice explanation of the play. Dexter McCluster was the intended target and normally in man-to-man, which the Raiders were playing, you want to run out your route. In zone, you camp out in the soft spot of the zone. Quinn probably thought McCluster would keep running and he didn't. Interception Raiders.

Score update: Chiefs 0 Raiders 6 A game of field goals. For the Raiders at least. Sebastian Janikowski with a 50-yarder.

Then, the Chiefs were bailed out by Sebastian Janikowski -- he missed only his third field goal of the season on the Raiders next possession. 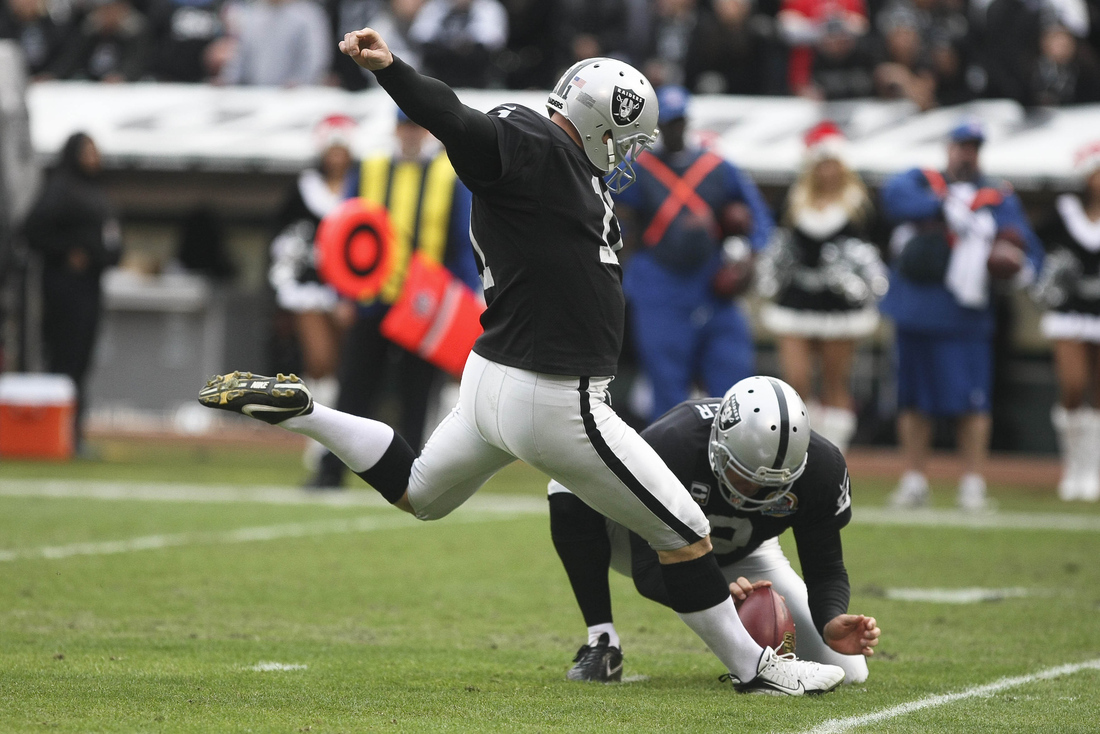 Score update: Chiefs 0 Raiders 9 What else? A field goal. But a big one: from 58 yards out.

Halftime stats: Brady Quinn has 35 yards passing. The Chiefs have -2 yards rushing. Zero first downs. One of the worst halves of football I've ever seen.

The Chiefs are record-breakers:

5:08 in the third quarter: the Chiefs get their FIRST first down of the game. The next play: Another first down! The Chiefs offense is rolling (...I'm just going to ignore that that drive ended up in yet another punt.)

The Chiefs offense is able to move ball into the red zone, largely thanks to a defensive pass interference penalty on the Raiders. Facing a fourth down, inside the 10-yard line, the Chiefs ... had a delay of game! Classic 2012 Chiefs. Of course they didn't get it on the 4th and 9 attempt and gave the ball back to Oakland.

PROOF that Jon Baldwin was in Oakland today: 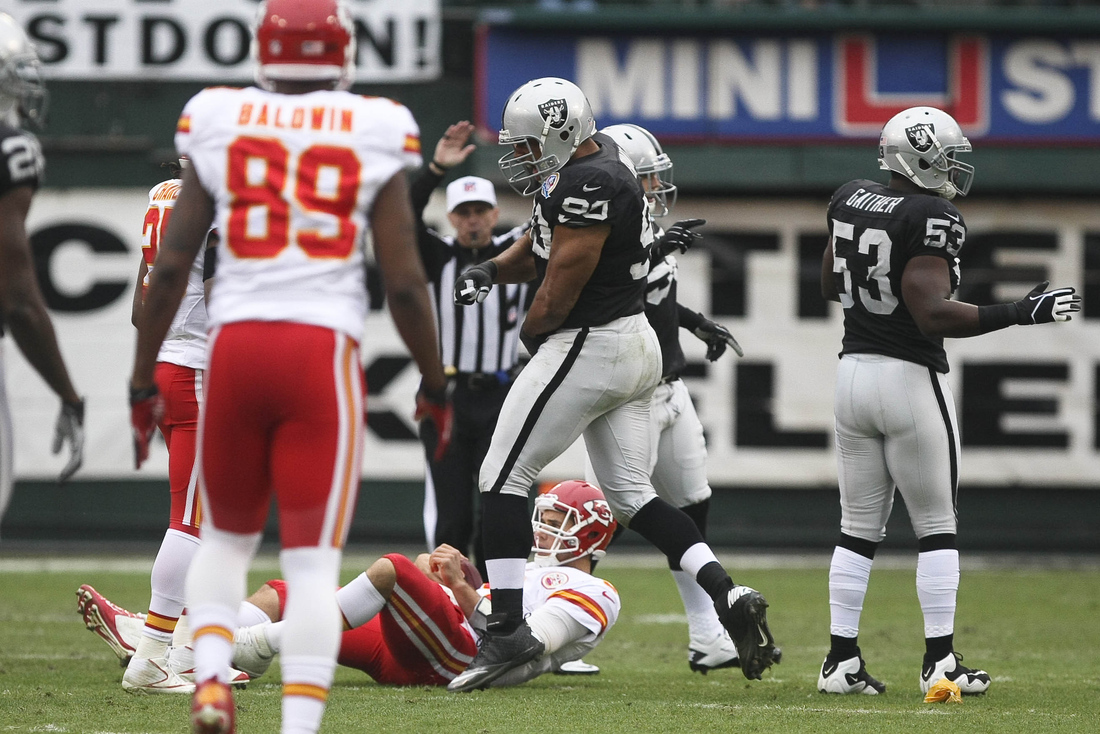 Jon Baldwin had 0 catches for 0 yards on Sunday.

This sums up the day:

Chiefs vs. Raiders: KC is playing so it must be a blowout loss