What the Chiefs really think of Stanford Routt

Share All sharing options for: What the Chiefs really think of Stanford Routt

One of my favorite things is hearing Chiefs media and personnel talk about a player after he's been cut because you usually get something closer to the truth than if he were on the team. That's the case with Stanford Routt, who was cut earlier this week by the Chiefs.

Mitch Holthus went on 810 WHB this week talking a little bit about Routt and now we hear how he really feels about the now-former Chiefs cornerback.

"I wasn't a Routt fan, particularly in the last three or four weeks," Holthus said. "He didn't want to play physical."

Michael Lombardi said something similar about Routt on 810 this week: "When you have a corner that doesn't want to tackle, you can never balance your defense. It made no sense given Romeo's style of defense."

"He wasn't ready on the snap on the 62 yard touchdown pass in Tampa," Holthus continued. "That's the one that really got my attention because if you recall, it was 0-0, and Tampa quick snaps Kansas City. Just picks it up and throws it. [Josh] Freeman basically heaves it in the air. Tampa Bay's [Mike] Williams gets it and Stanford wasn't ready for the snap. If we could rent out a theater downtown tonight and show it to you, you'd see the same thing."

It's not a theater but I've got coaches tape!

This is the play: 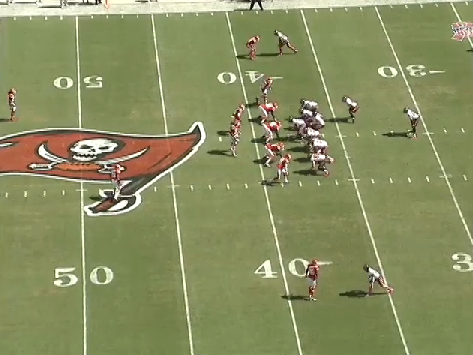 Look at Routt in the bottom corner, a split second before the snap. He's just standing there.

I'm not sure which is worse: A.) That Routt wasn't paying attention; B.) that Williams caught the ball with Routt on top of him; or C.) that Williams just ran in for a touchdown after catching it.

This is the end of episode 3, season 1 of "Why Stanford Routt was cut."