Kansas City Chiefs Week 11: The Best And The Worst

The recently reformatted Best & Worst with His Dirkness tries to forget the present and focus primarily on the future of our beleaguered Kansas City Chiefs.

Share All sharing options for: Kansas City Chiefs Week 11: The Best And The Worst

I'm switching up the Best And Worst on everybody. This article was previously meant as a game recap, but seeing as how Chiefs games are now tougher to stomach than a late night save the starving children commercial, I am moving on from this season's meaningless games.

The new Best and Worst will simply be a status quo of the Kansas City Chiefs, presented midweek after the glorified stank of the previous week's game has worn off entirely (it's somewhere between a 24-36 hour process).

Attempting to write about this team the day after they "play" a "game" is more brutal than Carrington Harrison trying to sing "Mmm Bop".

But it will all be over soon. Or at least, this era of hot garbage will be. Scott Pioli, Romeo Crennel, and Matt Cassel are as good as gone in a matter of months. No tip-toeing around these predictions here. They're done.

And I do think Save Our Chiefs had at least something to do with it. The Blackout on Sunday surpassed everybody's expectations (at least anybody's that I heard). And it won't stop there. More black will be worn. More tickets will be sold (or not sold) for $4. More boo(ze) will be reigned down upon the team.

And come December, Kansas City will be seeing a different type of Arrowhead Blackout on Sundays.

The message has been sent. There's no way the tri-dumb-virate survive this debacle.

The Best and Worst With: His Dirkness:

Worst Chiefs topic - Off the field shenanigans. Can't do it. Can't write about 'em. I actually first started writing because I hated how much time ESPN (the only channel that worked on my TV) spent talking about legalities, contracts, suspensions, Terrell Owens doing sit-ups, Brett Favre's dong, etc. So I DON'T CARE WHAT THE CHIEFS WERE DOING WITH FIRE PIOLI SIGNS.

Best time to get to know your College QBs and NFL Coordinators - Ri now! Or, probably a few weeks ago if you like to overachieve n' s(tuff). This is THEE offseason though, folks. I cannot stress enough how important the next 5 months will be for this franchise. More likely than not, some QB wearing a college jersey right now will offer a new hope for this team. Meanwhile, in a galaxy far, far away, our future head coach roams a sideline. This is our most desperate hour. Help us Obi-Wan Ke-Dirkness. You're our only hope.

Best way to supplement the Chiefs' future QB - With somebody who can coach him up. I wouldn't trust anybody on this coaching staff with a rookie QB, even if Tebow himself told me that it was the right thing to do. The QB search is getting most of the hype, but the offensive mind is just as important. And I've got your guy...

Best name y'all should learn - Pete Carmichael Jr. No, he isn't a NASCAR driver. He is the offensive coordinator of the New Orleans Saints. Has been since 2008. He was the team's "passing game coordinator" before that. The Saints' offense has been among the most prolific in NFL history year in and year out since Carmichael arrived. Now, you may chalk that all up to Drew Brees and Sean Payton, and understandably so, but let me give you a few reasons to consider this reserved 41-year-old son-of-a-bitch coach.

Last season, Sean Payton was somewhat forced to relinquish playcalling duties for New Orleans (remember his gruesome sideline knee injury?). Carmichael took over and the team scored 62 points in his first game. He did such a good job that Payton elected to hand over playcalling duties to him full time. Yada, yada, yada, the Saints went on to set the NFL record for total yards in a season. In their playoff opener, they set the NFL record for most yards in a postseason game (626 vs. Lions). Next game, they lit up San Francisco's defense (in defeat) for 32 points (the most points they allowed all season), including two lead changing TDs in the final 4:02 of the game. This season, the offense has continued to roll (5th in yards, 4th in points) sans the suspended Sean Payton. This dude is proving he can get the job done without Payton around.

Now, I know what you're thinking. They have Drew mudda-fuggin' Brees! I hear you. Yet, I remind you that Brees was a good NFL QB before he ever set foot in New Orleans. He put up two solid seasons in San Diego before suffering his infamous shoulder injury. Guess who was in San Diego with him? Pete Carmichael (he came to New Orleans the same year as Brees). He worked under our very own Marty Schottenheimer. And if you need further proof, I'll point out that he served as QB's coach for the late 90's LA Tech juggernaut with Tim Rattay and Troy Edwards (I'm joking, sort of).

This guy reminds me of a rich man's Joe Philbin, who's doing a decent job with Ryan Tannehill and the Miami Dolphins right now. Everything I've read about him A.) calls him a genius/guru, and B.) talks about how shy and credit-deflecting he is. Similar to Romeo? Maybe. Or maybe Romeo is just a terrible NFL head coach. Get this man a controlling defensive coordinator and a charismatic General Manager (to become the face of this franchise), and you're looking at the next Kansas City Chiefs head coach. My boy ~ Pete Carmichael Jr.

Worst injury of the weekend - Matt Barkley. I wish he had his shot to topple No. 1 Notre Dame (Is this a...what year is this?) in what will be / would've been a huge game. A big time performance, wave of momentum, and a slam dunk first pick in the 2013 NFL Draft would make things a whole lot easier for the Chiefs. However, it is Barkley's digression that has brought indecision to the Chiefs' future QB search. Once considered a guarantee to go first overall, Barkley hasn't looked the same this season, and I haven't watched enough of him to know why. He's got dominant WRs, a suspect o-line, and a dolt as a head coach. And yet, he remains the most likely candidate for the Chiefs at the top of this Draft. 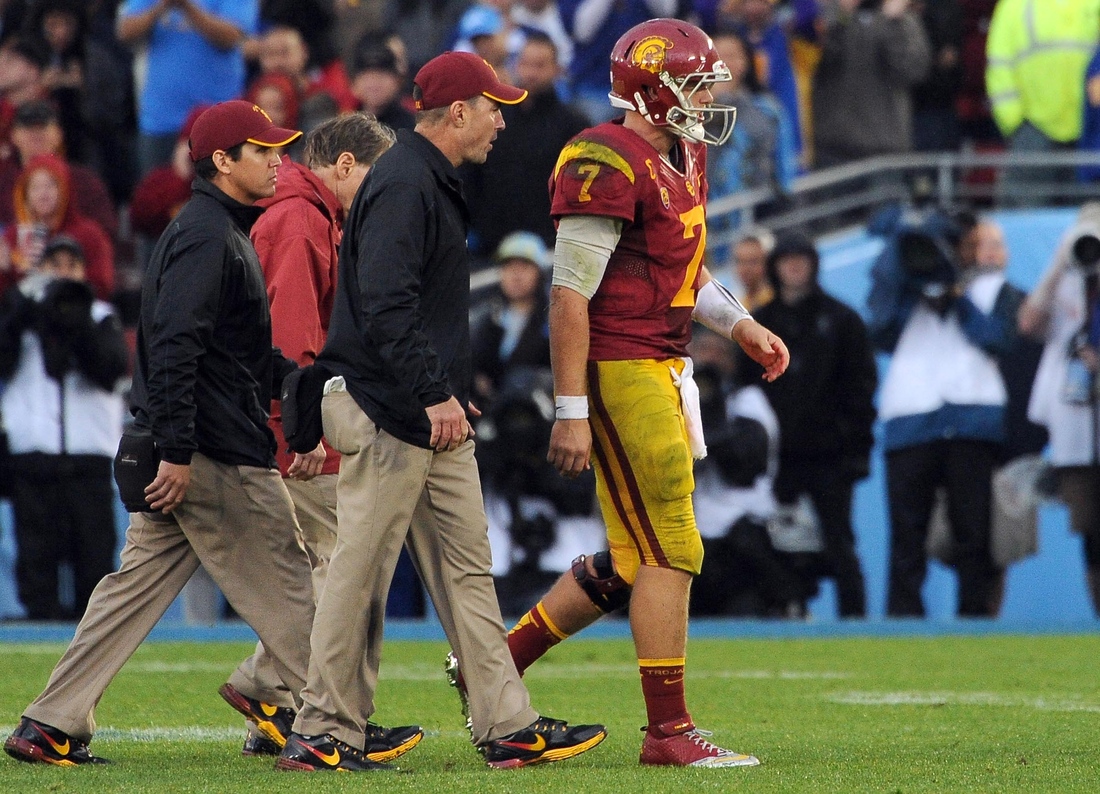 Best 6:37 stretch of the weekend - NC State's Mike Glennon's barrage-a-thon of TD's in the opening stanza vs. Clemson. The first TD was a deep strike on a rollout that traveled over 50 yards in the air and hit his WR in stride. His next dime was a deep post that couldn't have been thrown any better, covering 45 yards in the air. The third and final TD of his assault-on-the-end zone was a beautifully placed post pass, thrown will eating a 280 pound defensive end for lunch. Glennon put the full array on display in less than 7 minutes of game time (a new pair of pants was necessary to begin the 2nd quarter).

Glennon put on his show in what was probably the team's second biggest game of the season. In the biggest game, he orchestrated two TD drives in the 4th quarter, including the game winning TD pass on 4th down with 16 seconds left, to lead NC State over #3 Florida St (their only loss of the season). Glennon is coached by Tom O'Brien, who also coached Russell Wilson and Matt Ryan in college, the latter of whom would be my NFL comparison for Glennon. I like the idea of taking a QB in the first round better (although not necessarily the options), but if the Chiefs put their fate on hold until round 2, then I hope they take my boy ~ Mike Glennon. (Note: NC State's final regular season game is against a truly terrible Boston College team at 2pm on Saturday, only on ESPN3).

If you're looking for more of your Dirkness fix, be sure to check out the newest episode of my Amateur Hour podcast (done so with Ryan Hall) where we discuss potential head coaches and quarterbacks for the Chiefs, before dabbling into a little college football and things we're thankful for at the end. Having a lot of fun with these, I think you might enjoy them. We've also done podcasts in the last month with Sam Mellinger (my personal favorite), Nick Wright (he's boisterous), and Marty McDonald of Save Our Chiefs (very informative). Warning: It is, most definitely, Amateur Hour.

Also, be sure to let me know what you think of this new Best and Worst format in the comments or on the Tweeter.