For the second time this year, the Chiefs made an above average offense look very pedestrian.

Nobody gave this Chiefs team a fighting chance coming into the game last Monday. The only way it was happening is if the defense played lights out and the offense took care of the ball. Well...the defense did its part this week. A bit of a surprising slow start in the first half turned around into an amazing second half, mostly riding the stellar play of members of the front seven. Here's how it shook out.

49.3% of the time, the Chiefs removed a linebacker and a defensive lineman for a dime defense.

Ro'Po still got the start, even with the Shaun Smith signing, as expected. The DL rotated heavily all game and showcased a number of looks. TJax in the dime, Toribio at defensive end, and Ro'Po flipping sides once or twice. It kept the offensive line guessing all game.

A stat that I'm now officially tabulating: there were 3 "DJ Specials" this week. Two for loss, one for no gain. I'm becoming convinced that the guy turns into a heat seeking missile 2-3 times a game at this point.

Poe once again had a poor start to the game. He made a couple plays (as BJ Kissel pointed out earlier this week) in the early going, but did struggle to occupy blockers. He was immovable, but after letting the double team go, he's got to disengage and make a play. That said, he was a force in the second half, and part of the reason why you saw DJ flying around as much as he was.

Allen Bailey saved the team's bacon a couple times this game with backside pursuit. I've been critical of his play this year, and those are the things he needs to do to get back to where he was last year.

Shaun Smith wasn't much of an on-the-field factor this week, but that's understandable, given the lack of playing time he's had this season. He wasn't a big dropoff from the starters, and held his own fairly well. He won't be taking anybody's jobs with performances like this past week's, but he's a solid rotational player.

The zone the linebackers were playing this week seemed to work a lot better against Pittsburgh than against other teams. Part of that is due to the backup quarterback seeing as many snaps as he did, and part of that was above average performances from the cornerbacks. Surprising, considering Brown and Arenas were seeing more time than usual. It's something to build on. 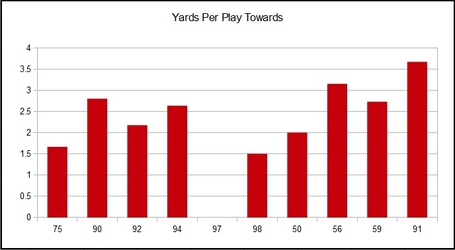 First off, I left Allen Bailey's number out of the graph. It was 1 play toward for 17 yards, and it made it rough to see just how well everyone else did. There are some low numbers that are impressive there, but more impressive are the guys that were ran at more than five times with low figures: Ro'Po, Houston, Poe, Jackson, and Belcher all were under the 3 YPPT mark while facing a good number of plays. DJ's number may look high, but remember that he is facing all of the dime snaps, and they're usually run at him. Only so much he can do in those situations. 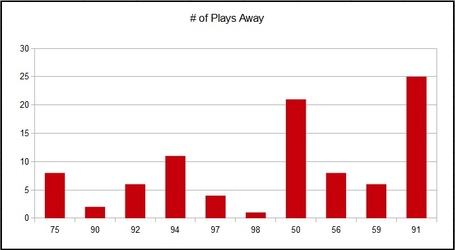 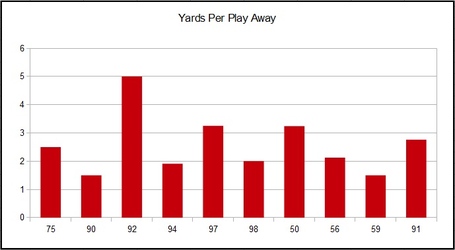 Once again, the opposition was forced to run up the gut. As you can see, on the plays run away from the center of the defense, Pittsburgh had some success. It's easier said than done, though, and the Chiefs consistently do a good job of funneling the run back inside. Also of note: look at Jovan Belcher's YPPA number. 6 plays, 9 yards. That's what DJ does in the 3-4.

Tamba was thrown at once in coverage on a screen play, and he was able to force a throwaway. That was his only target. Belcher saw a target for 7 yards and Houston had a target for 6 yards. DJ was thrown at 4 times for 28 yards for a 7 yard per target mark.

Tyson Jackson was a monster on the line this week with 8 EDT's! Impressive. Poe had 4, Smith had 3, and Toribio had 1.

The offensive line abused Poe early for 4 DFM's. He has to start his games better. Ro'Po and Toribio had 2 while Bailey had 1.

DJ was the only player with a TFL, and he had 2.

Tamba and Houston both had 2 pressures.

DJ filled an outrageous 9 gaps on Monday. I'm sure most of the readers noticed several of them. Belcher notched 3.

DJ and Houston forced a fumble, and Tamba broke up a pass at the line of scrimmage.

It sucks to watch this defense play that well for 4 quarters against a good team and not get a result out of it. They were flying around the field, making plays, and trying to force turnovers to set the offense up in advantageous positions. These guys have been flirting with a good defense for awhile now, but the inconsistencies and the bad positions the other facets of the game set them up in force them to almost quit mid-game. The key is that this team has to be in the game, and we'll see this type of defense on Sundays.

So...how about it, offense? Keep taking care of the ball and putting some points on the board, and these boys will make sure you win. Deal?