The Kansas City Chiefs are kicking off Cincinnati Bengals week with seven players on the injury report, including Dwayne Bowe and Jon Baldwin.

It doesn't look like injuries will be a major factor this week, pending the status of Baldwin and Jon Asamoah.

Baldwin has a head/neck injury suffered in Monday's game against the Steelers. He hurt it trying to make a catch (he dropped it) and did not return to the game.

Asamoah has a hand injury. Not sure when it happened. He played in all 64 offensive snaps on Monday.

O'Connell has an ankle injury. A high ankle sprain to be more specific. He's probably not going to be available this weekend. Maybe longer than that.

Bowe has a thigh injury. You'd have one too if Ryan Clark jacked you in the thigh. 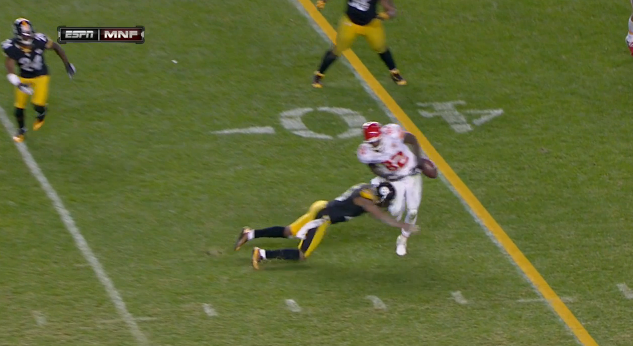 Both Bowe and Steelers safety Ryan Clark were hurt on that play with Clark getting a concussion. Receivers don't wear many pads on their legs so this was probably painful for Bowe. But he did come back into the game. He should be fine.

Maneri was first listed on the injury report last week with an ankle injury, but he played in nearly half the offensive snaps on Monday. So he should be good to go.

Poe has a knee injury, which Crennel says he hopes is just a minor bruise. Something to keep an eye on.

So he can practice. But not play. Right?