The Chiefs came close but couldn't hold off Pittsburgh in overtime, 16-13.

The Kansas City Chiefs played much better than anyone expected but couldn't fend off the Pittsburgh Steelers. KC lost 16-13. The Steelers beat the Chiefs in overtime after Matt Cassel threw an interception on the Chiefs second play of the extra period.

It was a rainy and cold night in Pittsburgh, with the tarp covering the field until game time. 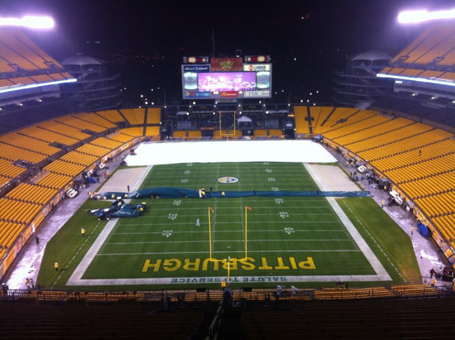 And Todd Haley caught up with some of his former players. 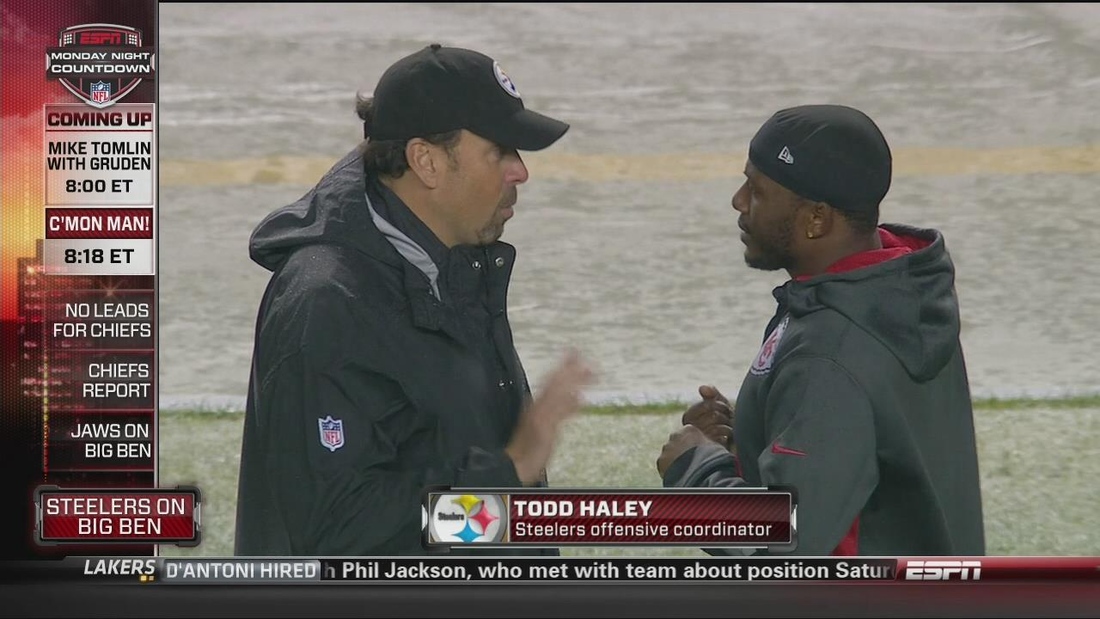 The Chiefs first lead of the season came thanks to a key pass from Matt Cassel to Tony Moeaki for 38 yards. Moeaki was wide open and picked up some nice yards after the catch. Then the Chiefs let Jamaal Charles do this thing, rushing it in from 12-yards out.

I REPEAT: THE CHIEFS HAVE A LEAD!

It was kinda nice to get this tweet from our boss:

The Chiefs do ANOTHER thing they haven't done all season -- besides take a lead or score a first quarter touchdown -- take a two-score lead. The Steelers' Isaac Redman put the ball on the ground, giving the Chiefs defense a turnover and the Chiefs offense with great field position. KC's offense came away with points.

The Chiefs lead lasts for much of the second quarter before the Steelers' Mike Wallace finds the end zone with this beautiful reception.

So, the question is whether he had control of the ball. It looks like he DID have with control of the ball, as he rolled over and remained in bounds. Somehow, the ball never hit the ground. Which means Wallace made this catch with his crotch. An easy pass dropped by Dwayne Bowe on the Chiefs following drive really highlighted how great this catch was. The referees ruled it a touchdown on the field, it was reviewed and confirmed a touchdown.

Steelers fans didn't expect this game to be this close, 10-10 at half.

Hali and Houston had a joint sack celebration.

Roethlisberger went down on that sack. He was holding his arm. Byron Leftwichis their backup. It wasn't pretty with Leftwich at QB. Roethlisberger was diagnosed with a right shoulder injury.

The Chiefs are doing a lot of celebrating. Justin Houston and Tamba Hali had a Kid 'N Play sack celebration. Then Houston had a touchdown -- that was called back -- which resulted in this celebration.

And of course that celebration resulted in a penalty. You can't celebrate as a team. The Chiefs can't even celebrate correctly!

Arenas is replacing Routt. Big penalty there. Arenas also looks to be shaken up, trainers looking at him.

I don't know why this was so funny, but it was:

Isn't the H in Hali silent??

Meanwhile, the Chiefs give up their FIRST lead of the season.

Steelers take the lead back from the Chiefs. 13-10 with 12+ minutes remaining. Steelers first lead of the game.

The Chiefs got the ball back after the Steelers scored and Matt Cassel went deep to Jon Baldwin, who almost made a big catch. Steelers cornerback Ike Taylor broke the pass up, or at least appeared to. It wasn't obviously an interception -- the refs ruled it was -- but the Chiefs chose not to challenge it. Baldwin appeared to be hurt on the ball. He was on the ground after the ball was pulled out like he was injured. The officials stopped the play and the Chiefs training staff tended to Baldwin.

With the Steelers holding a lead, the Chiefs faced a third and 6. They needed a play from their quarterback and they got...a pass that falls about three yards short. Fourth down. Chiefs punt.

Down 13-10, the Chiefs started their final drive of the game on their own 20 yard line with 1:51 remaining.

12-yard pass to Moeaki wiped out due to penalty (offensive pass interference).