Chiefs keep it close, but Ravens reign supreme at Arrowhead

The Chiefs played better but couldn't get it done, losing to Baltimore, 9-6.

Share All sharing options for: Chiefs keep it close, but Ravens reign supreme at Arrowhead

The Kansas City Chiefs improved their play on defensive dramatically but still couldn't hold on to beat the Baltimore Ravens, losing a nailbiter, 9-6. Matt Cassel was hurt in the fourth quarter, replaced by Brady Quinn. Cassel threw only 15 passes all game and had only thrown seven at halftime.

Jamaal Charles was the star on offense as he racked up 140 rushing yards on 30 carries. Justin Houston is the defensive star in the loss with two sacks.

The Chiefs were in this game all the way to the very end when the Ravens converted a 3rd-and-1 at the two-minute warning, effectively ending the game.

Here's our recap, another loss for the Chiefs:

The crowd today at Arrowhead is...not great. 11 minutes to kickoff (via @Jeff_Rosen88): 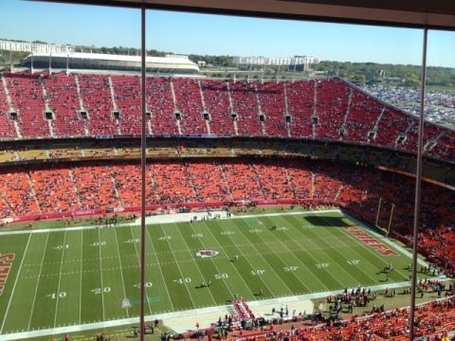 KC Wolf is roller blading into the stadium, being tugged by a gator truck.

KC Wolf has crashed into the Ravens fan. He is now punching him in the face. KC Wolf wins again.

Via @KCChiefs_Rachel, KC Wolf in action: 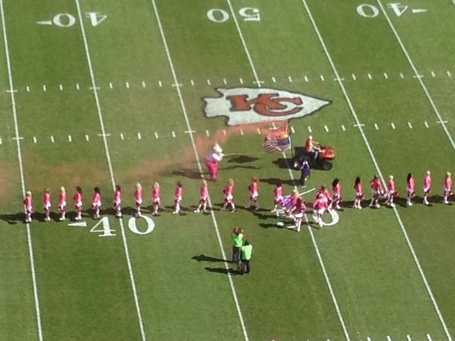 Oops. Another National Anthem screwup -- but not by the singer. The microphone on the Star Spangled Banner wasn't on until "...by the dawn's early light" so you heard nothing for a while.

A memorable flyover with planes coming over Arrowhead Stadium with pink smoke coming off of them. Check it out, via @ChrisSembower: 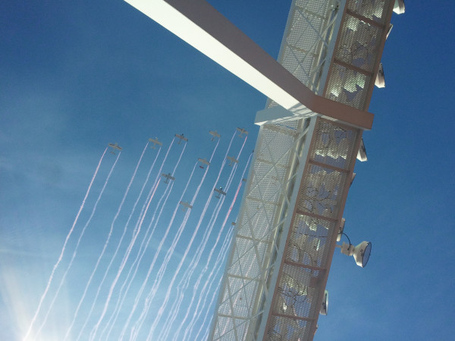 Chiefs first defensive drive: forced a punt. Hopefully this is a trend.

Jamaal in the open field! Charles hits the second level and bursts out into the open field for a 25-yard gain. It was headed towards the same goal line of his 41-yard touchdown run in the playoff game against the Ravens two years ago.

A draw play on 3rd and 8 is a loss of 3 yards. KC is punting. Field position game, gonna pin the Ravens.

Defense is giving #Chiefs a chance at what would be a season-turning win. Just need help from someone other than Bowe and Charles on offense

#chiefs defense must think its the 3rd quarter already.Looking good

This is a potent #Ravens offense, folks. Their D is as good as usual, but Balt can score tons now, too. Credit #Chiefs thus far.

Chiefs get a big break: Charles fumbled the ball on a run to the right side. It popped up in the air and it was briefly picked up by a Ravens player, before he dropped it in and the ball rolled out of bounds. The call on the field was that the Ravens player did not have possession of it and since the ball went out of bounds, it is Chiefs ball.

Now a real fumble: Cyrus Gray puts it on the field, Ravens rookie Courtney Upshaw picks it up. Ravens ball.

Score update: Ravens 3 Chiefs 0. Ravens create points off the turnover. Aided by a Ray Rice 37-yard run. The Ravens kicked a field goal for the first points of the game.

Chiefs get a spark off the return: 41 yards by Shaun Draughn, starting the drive on the 35-yard line.

Charles had 10 rushes for 82 yards in the first quarter. Cassel had two passes. That is all.

Make that two turnovers today. As the Chiefs are driving, Cassel's third pass of the game...

...tipped in the air and picked. The worst part is that Steve Maneri was wide open running to the other side of the field:

Here's another look at it with the CBS graphic in the way, as the ball hits Dwayne Bowe: 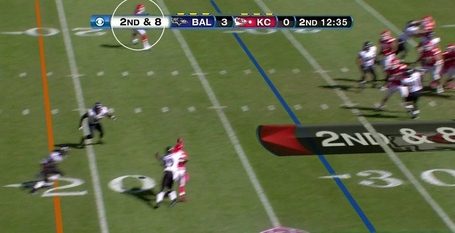 Eight minutes left in the 2nd quarter: Jamaal Charles passes 100 yards. This guy is on fire.

3rd and goal from the 22-yard line....Chiefs run the ball. The faith in Cassel has to be at an all-time low.

Score update: Chiefs 3 Ravens 3. KC kicks a field goal to tie it up.

Don't look now but Jamaal Charles has his sights set on another 200-yard rushing game.in the second quarter he has 106 on 18 carries.

Jamaal Charles, limping and out of breath, but still making plays. Beast. #chiefs

The story of the first half:

If you ever wanted to see a quarterback neutered during a game be sure to catch highlights of the #Chiefs 1st half.

This is a good summary of the Chiefs season: the Chiefs recover a fumble on the second half kickoff, setting them up with great field position. A pass interference call against the Ravens in the end zone gives the Chiefs the ball on the 1-yard line. Easy touchdown, right? Well...

Fumble. Yes, fumble. This is the most 2012 Chiefs play ever.

Score update: Ravens 6 Chiefs 3. Baltimore kicks it in after a 7-play, 80-yard drive in the second half.

After the Ravens score...

Cassel booed as he comes out onto the field. This is just transitioning back and forth between funny and sad. #Chiefs

The Ravens get the ball back but the Chiefs defense bails them out again: Brandon Flowers with the interception.

4 minutes left in the third quarter: "Brady" chant starts and then...

Cassel drops back to pass....another tip. Another interception.

Justin Houston's second sack on the day comes on a key third down that forced the Ravens to kick a field goal. He is becoming a very, very good player right in front of our eyes.

We have a pass completion:

Cassel finds Jon Baldwin down the field. Baldwin leaped up to make the catch. And he celebrated. A lot.

Cassel can't catch a break, either. He hits Dexter McCluster wide open down the field but it was a penalty on Dwayne Bowe. Cassel then sends one deep to Baldwin and there was a no call on what appeared to be pass interference by the Ravens. (Others on Twitter disagree that it was a PI on the defense.)

And... Down goes Cassel.

The Chiefs starting QB is hurt with a head injury and in comes Brady Quinn. This is a potentially huge moment for the Chiefs season. The fans have been clamoring for Quinn for a while now. This may be the moment when the Chiefs quarterback situation changes forever.

Whoa, Ravens fumbled and it rolled around with KC recovering in the end zone. Refs say: Flacco was down. No fumble, Ravens ball.

The Ravens churn out another first down at the two-minute warning, which ends the game. The Chiefs play better but still lose.