The Chiefs had a strong first half coupled with a second half meltdown, making for some below-average numbers.

The Oakland Raiders came into town to play against a pretty "down" Kansas City Chiefs team last Sunday. The Chiefs defense had been playing pretty strong first halves, then letting down towards the end of the game. Sunday was no different. The Chiefs were strong against the run in the first half, and the front seven had good short coverage on passing plays. After a few turnovers and some bad field position, the defense finally gave way and allowed yardage in the second half.

45.5% of the time, the Chiefs removed a linebacker and a defensive lineman for a dime defense.

Ro'Po got the start once again in Dorsey's absence and played all of the 3-4 snaps. Dontari Poe got the majority of the snaps at nose tackle, with some rotation by Jerrell Powe. Tyson Jackson played every series but one at left defensive end, with Anthony Toribio spelling him for five snaps.

A stat that isn't officially tabulated, but there were two "DJ Specials" in this game, and another that ended up as a missed tackle, resulting in a big gain.

Dontari Poe starts the game off with a whopping 3 destructive free men in six run plays. That's half the time that Belcher or DJ had a man on him to start the game. It continues throughout the game...not one to remember for the rookie.

Allen Bailey got manhandled all game long. He managed an early pressure and was part of a tag-team tackle for loss with Eric Berry late in the game, but the rest of the day he was pancaked and shoved off the line by a single blocker. Very discouraging.

Ropati Pitoitua and Tyson Jackson had decent games trying to keep the linebackers clean. They both got caught out a few times in the second half with some missed gap responsibilities. That being said, my complaint about Ro'Po has been his tendency to be a "boom or bust" player on the line and on Sunday he was much more consistent. He created plays and didn't make as many mistakes as in previous games. Dorsey may struggle to get his spot back when he gets healthy.

In lew of the highlights for this game, go read Week 2 of my Front Seven Evaluation. Yes, this week's balance between 3-4 and dime was better than that week's balance, but like that week, the majority of the big plays given up came while the defense was in the dime. There were a handful of occasions where Oakland had two wide receivers, two tight ends on the line, and one running back. They ran up the middle each time. Three big plays came while they were in that formation, and the Chiefs were in the dime defense...for some reason. 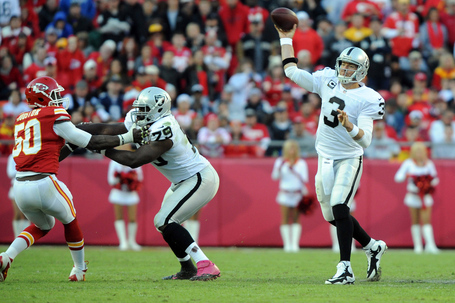 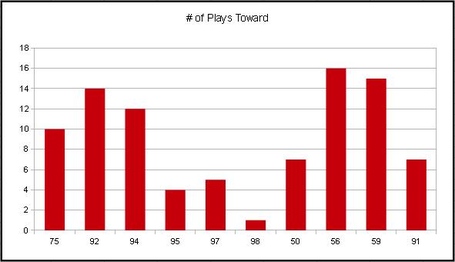 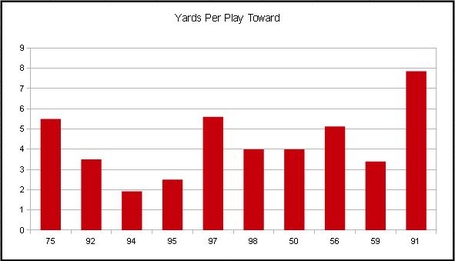 Tyson Jackson leads all with a very nice 1.92 YPPT. Joining him as the only ones in the "under 3 club" is Jerrell Powe. Consider this, though: every single player with at least 2 plays run at them was UNDER 2 YPPT at the half. Somehow, Tamba ends up clocking 7.85 YPPT. DJ's above 5 YPPT! I will say this about Ro'Po's number: two of the runs inflating his number were his fault. The others were poor tackling or wrong gaps by the guys around him. 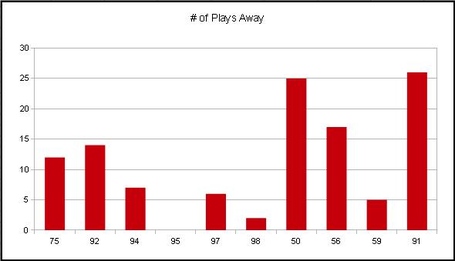 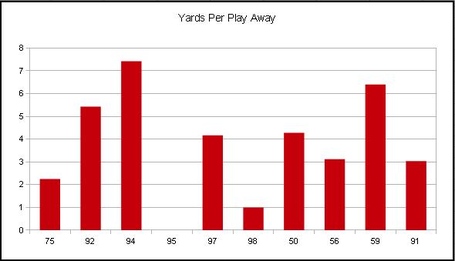 As it usually turns out to be, it was healthier for the offense to run away from Jackson and Belcher last Sunday. The incredible part is that teams haven't seemed to figure this out yet. It could be scary if they ever change things up and attack the other side of the field a bit more.

The linebackers had pretty good coverage this week. Tamba had an early misread that cost the team 11 yards, but DJ did well with 4 targets for 16 yards. I'll take 4 yards per target out of a linebacker.

Ro'Po and TJax led all defensive linemen with 4 effective double teams. Powe landed 3 of them in very limited snaps, so that was impressive. Toribio and Poe each had 1.

There were a TON of free men running through the second level this week. Dontari Poe led all with a horrific 7 DFM's. Bailey and Ro'Po each had 3, and Tyson Jackson had 2. That's an insane amount of big men causing trouble for the linebackers, and is a big part of the reason why the second half numbers were so bad.

DJ led all players with 2 tackles for loss. Belcher, Houston, Ro'Po, and Bailey each had 1 TFL.

Tamba led the team in pressures with 2. Ro'Po, Bailey and Houston each had 1.

DJ and Tyson Jackson both had missed tackles.

DJ and Ropati both swatted a ball down at the line of scrimmage.

There's not a whole lot of positives to take from this game. Tyson's numbers were good yet again, but (yet again) there's nothing spectacular going on there. Ro'Po is turning into a nice bright spot for the defense, and honestly could be the best thing to come out of this offseason. Outside of DJ, the linebacking corps didn't really make very many plays, and that's starting to become a trend as the team gets further and further into a hole. The rookie Poe played worse than his sophomore counterpart Powe, and yet still found himself on the field more and more as the game went along. On top of all that, Romeo reverted to the auto-dime again. The nickel had vastly outperformed the dime in its limited usage thus far this season, so I was hoping he'd keep increasing its usage. Alas, the dime was prevalent yet again, and like I've been saying for the past couple years: it got torched against the run.

Three weeks ago after the Ravens game, I said this was a good defense. This week, the front seven played half of a game as a good defense. They were let down by their secondary (again) and the offense (again). Then, the mistakes started occurring more and more frequently. All of the sudden, the fundamentals were lacking and they weren't playing good defense anymore. Did Oakland adjust, or did the defense just quit? What do you think, AP?