The Chiefs defense held a top five offense to nine points last Sunday. Here's how they did it.

Nine points. The Chiefs defense gave up NINE points to a top five offense this week, missing three players that get a lot of snaps. That's hard to do, and it's unfortunate that they couldn't get a little help on the other side of the field. Baltimore came out with a game plan to attack the Chiefs front seven with star running back Ray Rice, and to throw short passes across the middle of the field. Both aspects of this game plan put the onus on the Chiefs front seven. We know they did well on the scoreboard, but how did they do in my book? Let's find out. 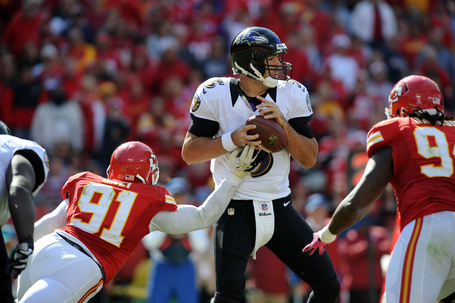 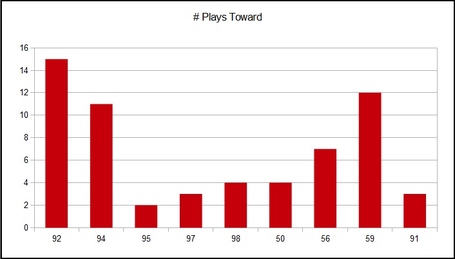 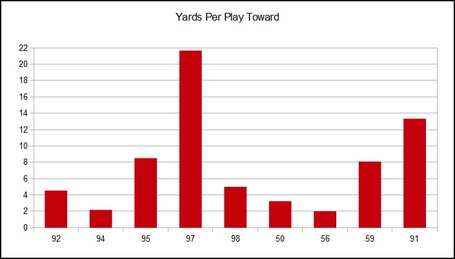 Those are some ugly numbers, fellow Chiefs fans. DJ leads all with an even 2 YPPT, and Allen Bailey puts up an embarassing 21.67 YPPT, although one run wasn't entirely his fault. Tamba and Belcher get burnt by Rice's big run, too. That's how it goes though, when somebody gets down, you need to step up and make plays. Good showings by Tyson (2.18 YPPT) and an okay one by Houston (3.25 YPPT). After that, eveyone is over 4.5 YPPT. 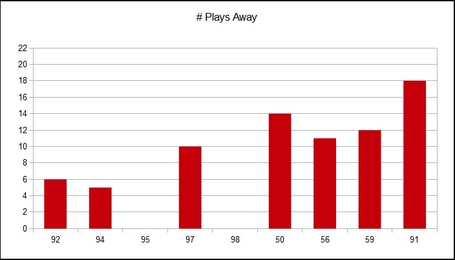 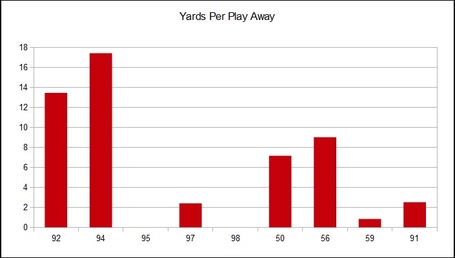 For the first time all year long, it's actually been healthier for an offense if they ran AT Jovan's side of the field, rather than away from it. Granted, Jovan ended up behind Bailey an awful lot this game (DJ and Jovan switch at will, so it just depends where the tight end is lined up), and that did hurt his numbers. Once again, running away from the strongside (Tyson Jackson) and away from the middle (Dontari Poe) proves to be the most fruitful way to gain yardage against the defense.

The linebackers weren't thrown at much last week, with DJ seeing 2 targets for 11 yards and Belcher seeing one target for 18 yards.

The big boys came up strong this week in the Effective Double Team department. Dontari Poe led all comes with 6 of them, followed closely by Tyson Jackson with 5. Toribio had one.

Destructive Free Men were more than usual, and it shows in the graphs above. Poe led this category as well, totaling 4, with Bailey right behind at 3. Jackson and Toribio each had one.

Houston and Hali each had 2 sacks.

Houston led the team in pressures with 6, followed by Hali with 3 and Poe with 1.

It's a little bittersweet looking at the numbers and knowing how well the defense played. In previous weeks, the secondary got torched for big plays, leaving the front seven with average looking numbers. This week, the front seven was targeted, seeing more run plays, and it made their numbers look worse. Obviously, the weakness in the front seven was Allen Bailey, giving up a couple big plays, and getting run over a lot more than Ro'Po or Dorsey have this year. That will get better with those players returning.

I liked Romeo's game plan on defense this week far more than any that he's tried this season. More nickel meant more men in the box, and even though the run numbers are high, they likely would have been MUCH higher. He also identified Bailey's weaknesses at the half, giving Toribio some rotational snaps, and moving a superior run defender in Justin Houston to his outside shoulder. There were a lot of 3-4 yard runs this week, and no negative rushing plays. This season, there's been at least a couple big stuffs behind the line each game. I attribute this to a more traditional power rushing offense with a fullback, as well as an elite running back in Ray Rice that was able to get those extra 1 or 2 yards after initial contact and turn short runs into manageable runs.

This is a good defense. There's no doubt about that. Let's not forget that the Ravens have pretty much imposed their will offensively all season long, and they weren't able to do that this game. The key going forward has to be eliminating those 20+ yard runs on long down/distance situations, and cleaning up the penalties that keep drives alive. The front seven plays at a really high level for 95% of the game. If they can reduce that last 5% by a couple percentage points, they're a team that can pitch consistent shutouts.

Now if they could just get that offense going....