Chiefs Beat The Broncos And 18 Things To Remember

Share All sharing options for: Chiefs Beat The Broncos And 18 Things To Remember

The Kansas City Chiefs beat the Denver Broncos this afternoon, 7-3.
But...the Raiders lost. That means the Broncos are AFC West champs. Which sucks (obviously).
This wasn't a pretty game for the Chiefs. It was another one of those ugly, low-scoring wins. KC's defense played well, especially Justin Houston who racked up 1.5 sacks. Wallace Gilberry had two big-time third down palys holding the Broncos (and then a personal foul later). Brandon Carr ended the game with an interception.
Kyle Orton and Tim Tebow were both largely ineffective. Orton was 15-of-29 for 180 yards. Dexter McCluster had a 21-yard touchdown run and Dwayne Bowe had 93 receiving yards before getting hurt.
I jotted some things down during the game. Only 18 of them because this was a pretty ugly game to watch.
This game starts off just like the rest of the Chiefs games -- without a touchdown. The Chiefs are the only team in the NFL not to score an opening possession touchdown this year. Yep, the only team not to.
Ryan Succop misses again. The Chiefs kicked had two kicks blocked last week, earned a $14 million contract extension this week and missed his first attempt on Sunday. That's the kind of season the Chiefs are having.
Kyle Orton's buddy goes down. Broncos offensive lineman Chris Kuper left the game with an injury and NFL.com's Jeff Darlington noted of Kuper: "He was Kyle Orton's closest friend on the team during Orton's tenure in Denver." And that injury, by the way, is a broken ankle. It's an ugly one: 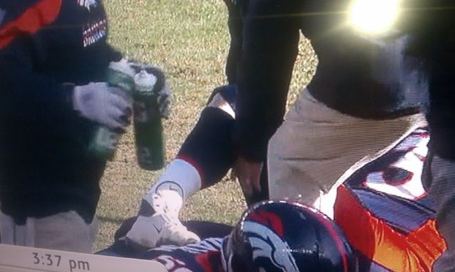 Not many people are better than Dwayne Bowe along the sidelines. The guy is great at catching the ball and keeping his feet in bounds, dragging his toes, or whatever to make the catch. He caught a pass over Champ Bailey near the sidelines that, at first glance, looked like a sure-fire incompletion. With a closer look you can tell Bowe secured the ball and kept his feet in bounds.
Matt Cassel is on the sidelines. He usually is but CBS cameras caught him talking to Orton on the sidelines. Cassel's around even if he's not playing.
Dexter McCluster stepping up on offense. Through the first quarter he racked up 60 yards rushing including a 21-yard touchdown run (which came after a 16-yard run). McCluster's been playing better in the second half of the season.
Dwayne Bowe is Orton's No. 1 receiver. Of course he is. Bowe has five catches for 74 yards through the first quarter. Orton has 84 total yards in the first quarter so Bowe's obviously his favorite receiver. (This is why what happens later in the game is so tough to swallow.)
Chiefs are using some 4-3 defense. Amon Gordon came in as the extra lineman. They started out in some 4-3 and then moved back to the 3-4 later. Interesting tweak for this Broncos offense.
Kendrick Lewis is a playmaker. Not the best player, and makes mistakes, but he has a tendency to make huge plays and he did that on Sunday by stripping Tebow. Heads up move by Lewis.
Uh-oh, Dwayne Bowe is hurt. He has a sore neck and the press box is saying he may not return to the game. Bowe went down after catching a pass and was clearly in pain as he walked off the field.
Allen Bailey gets his second career sack. His first came on Aaron Rodgers and the Packers.
Javier Arena makes a big mistake. He called for a fair catch on a Britton Colquitt punt and muffed it, which allowed the Broncos to recover at the 20 yard line. This is a game-changing type of mistake by Arenas. Inexcusable.
Did Tamba Hali get away with a facemask? The refs didn't call it but Tebow was stating his case that Hali grabbed his facemask. The replays aren't totally clear but it looks like he has his hands on his facemask but not pulling it. Tough call there.
This game is...ugly. That's really the best way to describe it. Boring, even. The Broncos kept running (and running). The Chiefs offense was nearing unwatchable levels without Dwayne Bowe in the third quarter.
Von Miller is missing. He didn't play regularly in the second half. It wasn't injury related.
Javier Arenas is hurt And it came on a great play by Arenas. He dove to bat away a Tebow pass and quickly grabbed his leg. Terrific play at a crucial point late in the game.
Brandon Carr seals it for the Chiefs. Picking off a Tebow pass. The Chiefs win the game, 7-3. Ugly game but a win is a win.
2009-like momentum. The Chiefs dominated the Broncos at the end of the 2009 season (and Jamaal Charles had a shot at the single game rushing record) and that momentum seemed to help them heading into 2010. Hopefully KC can use this game a lot like that one.