Ramblings of an Idiot: Eggs, Basket, One

Share All sharing options for: Ramblings of an Idiot: Eggs, Basket, One

The Kansas City Chiefs have begun the 2011 season. It took 10 absolutely horrid quarters of the 2011 season to wake up the Chiefs and their offensive play caller, but in the second half of the 3rd game someone finally talked some sense into Bill Muir. I think that he was under the impression that, being an ex-offensive line coach, he wasn't allowed to call passing plays on any anything less than 3rd and 20. In fact, in the first half of the week 3 game he was still calling running plays, even on 3rd and 20.

In all fairness to Muir, the few times he took the stick out of his back side and called a passing play the results were mixed (and that's being kind). They were mixed between INT's, scrambles resulting in sacks, incomplete passes, incorrect routes run by receivers, flat out drops, completions good for 2 yards less than the team needed for a first down, and running back screen plays. Those kind of results don't exactly inspire confidence in the teams ability to mount a passing attack. Matt Cassel has to shoulder most of the blame for the ineptness of the passing game so far this year, but as we saw in the second half of the San Diego game, this team CAN complete the occasional pass play if the OC bothers to call them when it's not 3rd and 15+.

Last season Cassel threw for over 3,000 yards and did a damn fine job of protecting the ball. I'm not deluding myself into thinking the Chiefs were anything other than a running team that threw the ball when the run game gave them the opportunity to take advantage of a defense cheating up to stop the run. However, they were able to take advantage of defenses enough times to toss 27 TD's total, and feed Bowe  a league leading 15 of those touchdowns.

The additions of Breaston and Baldwin in the off-season, as well as the emergence of Moeaki and (to a small degree) McCluster in 2010, had a lot of Chiefs fans excited about the possibilities of the passing attack in 2011. Baldwin took a step towards proving he may just be the diva that some draftniks thought he was. That mess has resulted in Chiefs fans watching the sidelines and the injury report in order to get a glimpse of our #1 pick. We all know about Moeaki going down in the final pre-season game, lost for the year. Most of that pass game excitement died in the first 2 weeks while Muir called plays that seemed to be designed to hide our lack of passing threat more than to highlight it.

The Chiefs running game took on the role of the proverbial one basket into which Muir had been placing all the egg shaped pigskin covered sports equipment. Preface: I love me some Jamal Charles. At no time would I ever dream of rooting for him to end up injured, nor do I believe it helps our team that he's on the sideline ...... but (and this is a heavy butt indeed) ..... Judging by the change in play calling that happened in the second half of the San Diego game..... Charles getting injured may just end up being the tragedy that forces Muir to accept the inevitable. No matter how many injuries the team suffers, the Chiefs cannot win throwing nothing but dump offs and screen passes. We have to take shots down the field. 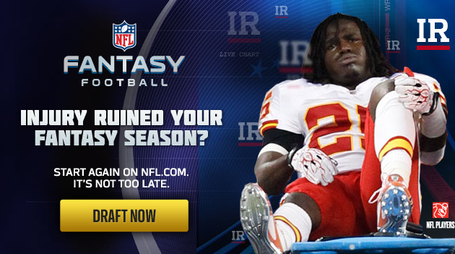 Charles is a special kind of player. In losing Moeaki and Baldwin before the season started the Chiefs lost what (in my eyes) should have been their game plan for the season. On any given play (with Charles in the backfield ready to break one loose every time he touched the ball) the Chiefs offense this year was shaping up to look something like this:

Bowe: Run a deep slant, short slant, post, corner, inside curl, outside curl, comeback, crossing pattern, or pull a double move into any of those routes. Take on the double team and pull that safety out of the box

Breaston: Read the defense and break off in a hot route, cross through the shallows, outside slant behind Bowe into the area he just cleared out, run a path intersecting with Moeaki or McCluster in an "X" format to pick off a defender, deep slant over the top of Moeaki, but underneath Bowe.

McCluster: Curl out, Curl in, reverse, read the defense and run a hot route, streak down the hash marks and pull the second safety off Breaston or Baldwin, flat out burn down the field in a fly route, take the hand off, catch the screen pass.

Baldwin: You're a rookie. You don't know the offense. You don't have a report with Cassel. You can't read an NFL defense yet to diagnose a hot route, and no one in their right mind expects a rookie receiver to light it up in their first season. So, you run a fly route. Then, next play, run the fly again, and again, and again, and AGAIN. Your job is to go deep on almost every single play. Just run deep and fight for the ball up in the air over the top of the defender if Cassel throws it your way. We've seen your jumping and catching abilities in college. We know you can do it. We'll let you learn some things as the season goes on, but for now.... just run deep and take the top off the defense until you catch enough balls that NFL DC's are forced to respect you. If we're lucky you'll clear out an extra defender so often that Charles can break a lot of big runs. If they don't respect you, we'll throw it to you and make them. Run Forest Run!

The loss of first Baldwin (due to his own stupidity... really, what rookie gets into a fight with a 12 year veteran on his own team? Suck it up and stop acting like a child. You're a rook, a zero, a big fat nothing in the NFL. You have no cred, no reputation, and no ability until you prove it on the field.) and then Moeaki before the season ever started seems to have punted the Chiefs plans backwards in time to 1980. I mean, what happened to the pass happy Todd Haley offense that we were all so sure was being built in the off season? It's like the Chiefs just decided that they couldn't have any success passing the ball without Moeaki and Baldwin on the field, so they were just going to run the ball and throw screen plays.

To some degree it's hard to blame Bill Muir for wanting to fall back on the best running game in the league in 2010. If you have that kind of weapon on the team, it should be your bread and butter. The problem (again, as I see it) is that the Chiefs spent 2 and 1/2 games trying, not only to use the run game as their bread and butter, but as the bologna, mustard, lettuce, pickle and tomato; as well as the chips and potato salad on the side. If our play calls had been Clark Griswald's picnic basket, then Muir would have been the one pissing on all the passing game sandwiches instead of the family dog. I can only assume that that decision came from fear. The team lost a couple pieces that they hoped would be extremely valuable for 2011, and instead of moving forward with other players taking larger roles we decided to scrap the plan and hitch our whole season on Jamal's back.

Even after Charles was lost for the season, the team spent another 4 quarters trying to play nothing but the run game and the screen pass with McCluster, Jones, and even Battle. It wasn't until the second half of the Chargers game that Muir finally figured it out. McCluster is not Jamal Charles, and if the defense doesn't think you'll ever pass beyond the 5 yard mark they will simply tee off against the run on every down of the game. On the rare occasion that you try to pass, the defense is going to send the heat every time because they know your passing game can't possibly be in sync when you never throw the ball down the field.

As much as I hate to say it, maybe losing Charles is the best thing that could have happened to Bill Muir as a play caller. It's entirely possible that, now faced with the prospect of HAVING to pass the ball, Muir will plan entire games around the tiny bit of success the Chiefs managed in the second half of their last game.

Eventually Baldwin will get into the game. Nothing has changed for him. I still believe that he'll be asked to run deep on almost every play. Now, more than ever, the Chiefs need to take the top off the defense and draw some coverage away from McCluster, Pope, and Breaston. McCluster is faster than the road runner of cartoon fame, but he doesn't have the moves Charles has and hasn't shown the ability to pick and choose his running lanes on the fly. I'm not giving up on him at all, but 10 carries a ball game (I believe) is all we're going to see from the Peanut.

I'm not chanting "Su-per-bowl Su-per-bowl!" after the halftime changes in San Diego, but I am hopeful that maybe, just maybe, Muir has realized that Charles' run game basket is not going to be equaled by Peanut and the rest of the RB Cluster. If we don't start passing the ball down field to open up the run the only cluster we're going to see is the same cluster-%uc$ that showed up in weeks 1 and 2.