Okay, class, let's take your seats:  Kalo's got some stuff he's got to get through.  Many of you may be asking "what the hell is this, and where is the KPM?"  For this week, I'm forgoing the process in lew of some (hopefully) valuable information, and some clarification on the defense that the Kansas City Chiefs call their "base" defense.  I've noticed quite a bit of confusion from some commenters as to the responsibilities of these players, and I've seen even more assumptions garnered from the media and fans regarding the production of players from various spots in the front seven.  I've done this once before, but that was 3 years ago, so I thought it might be nice if a refresher course could be completed and maybe it would help those who can't quite wrap their heads around exactly what is going on.  If you remember the last one, this might not be for you...but if not, join me after the jump and let's look at responsibilities and how the Chiefs squad fits into them. 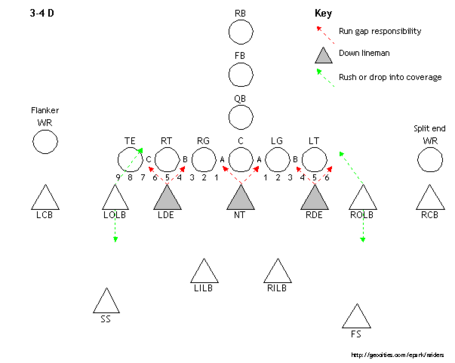 Nose Tackle:  This guy is the absolute heart of the defense.  If he can't get it done, there is a ripple effect throughout the front seven, and it kills pursuit in the run game.  Typically, this player is a big, squat man with long, strong arms for absorbing blockers from a distance in the run game, yet agile enough to split the blockers when a pass play is identified.  First and foremost, the nose tackle wants to make sure the blockers in his gap responsibility are contained within the gap and do NOT get past him into the second level.  Doing this allows the linebackers behind him and the defensive ends beside him to handle their own gap responsibilities and pursue the ball with greater freedom.  Second, the nose tackle is expected to shove his blocker(s) into the backfield to interrupt the quarterback's pocket or the running lane for the running back.  This forces players to adjust well behind the line of scrimmage and causes more trouble for the ballcarrier.

Kelly Gregg:  Gregg is an institution at the nose tackle position, and his size and weight are appropriate for the position.  He diagnoses run and pass plays well, and he eats a double team as often as he can.  He has lost a bit of a step as he's gotten older, and doesn't shove his blocker(s) into the backfield nearly as often as he used to do.  Still, he's a solid player at the spot that should help others around him perform at a higher level than previous years.  Week 1 was not good, so here's to hoping that his free blockers and gaping holes left were just anomalies.

Defensive End:  While nose tackle may be the most important part of the 3-4 defense, defensive end is definitely the least understood position.  Most who watch 4-3 teams take the field identify the defensive end position as an outside pass rusher and outer seal against the run, so when they hear defensive end, they look at sack numbers.  In truth, the 3-4 defensive end is closer (not exact, mind you) to the 4-3 defensive tackle.  Body type for a 3-4 defensive end varies quite a bit, but shares the ideals of a nose tackle (big; long, strong arms), but is usually more agile, as they work in a little bit more space.  Some defensive ends are asked to play similar to a nose tackle:  grab double teams, hold the gap, and shove blockers into the backfield.  Others play more like a 4-3 defensive tackle:  fill the gap, beat the blocker, and penetrate into the backfield.  The Chiefs scheme typically uses a "block-eater" on the left side of the defensive line and a "penetrator" on the right side.

Tyson Jackson:  Is there a player the media and fans attack more on this defense?  Tyson has great size, good strength, and a solid anchor.  He eats double teams often, and when he is singled, he typically seals the edge better than the outside linebacker.  So why is he so poorly viewed by those who watch the Chiefs?  Simply put:  he's the #3 overall pick, and some people are simply unable to view him as the player that he is now and was in college.  In our scheme, he does what he's asked to do:  keep the linebackers clean, anchor and hold at the point of attack, and when singled up, push the blocker backwards.  He's not 100% perfect, but he does what is asked of him more consistently than his compatriots tend to do, and when his backups are on the field, there are gaping holes in the left side of the defense.  The hate he gets for his play on the field baffles me sometimes, especially since it's about a decision the front office made, and has nothing to do with him.

Glenn Dorsey:  Dorsey plays the "penetrator" for this defensive line most plays.  Romeo Crennel does a very good job of putting him in positions where he is allowed to take on his man and use his quick first step to knife inside and disrupt the play behind the line of scrimmage.  He's not strong against the double team, but he's rarely asked to take care of one.  He doesn't miss very many tackles, and he handles himself well when left on a bit of an island in run support if Tamba gets too far upfield.  Definitely a strong building block and definitely a good bookend to Jackson.

Outside Linebacker:  This is the "highlight reel" position of the 3-4 front seven.  These are the sackmasters, the guys that blow up the back behind the line, the ones that finish a play off on the edge.  The ideal outside linebacker is a guy that can get by an offensive tackle to get to the quarterback, can stuff the run on the edge, AND can drop into coverage on a tight end or running back.  Most of the time, expertise in one or two areas will have the defensive coordinator avoid the remaining responsibilities, and put other players on the field to handle them.  Some 3-4 defenses rely on the speed of these linebackers to get consistent pressure, while the Chiefs have a coverage/run stopping linebacker on the left side of the defense and a pass rusher on the right side of the defense.

Tamba Hali:  What more needs to be said about Tamba?  He's a one-trick pony, but he does that trick arguably better than anyone in the league.  His run support isn't great, and his coverage skills are lackluster, but he brings the heat and forces every offensive coordinator to account for him on every play.  Elite pass rushers are hard to find, especially those that can transition to a standing start.

Justin Houston/Cameron Sheffield/Andy Studebaker:  Where do we go from here?  A spot formerly held down by Mike Vrabel, the strongside outside linebacker position is one that is still undergoing an open tryout.  Justin Houston seems to be a good pass rusher, but was not good against the run, and wasn't good in coverage against Buffalo.  Cameron Sheffield saw the field in passing situations, but didn't rush the passer well, and was only marginally better than Houston in coverage.  Meanwhile, the nickel linebacker for the past couple of years, Andy Studebaker, couldn't sniff the field in Week 1.  Does this position continue to be run by committee, or does someone step up and take the reins?

Inside Linebacker:  These are the guys that run the show in the 3-4 defense.  Their job is to fill gaps in the run game and cover the short/middle receivers in the passing game, all while identifying offensive schemes and changing coverages.  Typically, the strongside linebacker is very stout against the run, filling the gap and shedding any potential blockers to stop or redirect the running back.  The other linebacker tends to be more focused on coverage, but can step up and lay the wood when asked.  The two linebackers tend to string plays along or "assist" the other in making the play.  For instance, one linebacker could fill the gap against the run, shove the fullback out of the gap, and leave the running back dead to rights for the second linebacker.  Ideally, a team will want both linebackers to be heavy hitting, great coverage players.  These are rare, so the two-backer setup tends to be more typical.

Derrick Johnson:  Without a doubt plays a strong coverage linebacker.  He led the league last year in pass breakups for a linebacker, and made a spectacular interception in the preseason to show he's still got it.  He is beginning to show good gap instincts, and gets behind the line of scrimmage quite often, but needs some work on his tackling.  If he can learn to square his shoulders and wrap up a bit better, he's got the potential to be a great two-way inside linebacker.

Jovan Belcher:  Jovan has suffered through poor nose tackle play over the past several years, so it has been difficult to really grade him.  Some games he shoots the gap and lays big hits, while others he seems tentative and reluctant to pursue the running back.  When he's on, the defense comes up with big stops, though.  On the flipside, his pass coverage is quite lackluster, and he's never on the field in obvious passing situations.  Most times, when the 3-4 is on the field in a passing situation, Belcher gets immediately blitzed, so he's rarely ever in a coverage situation.

Well, that's the 3-4.  Hopefully that helps anyone who may have struggled to understand what certain players responsibilities are, or even to understand when people have discussed it at a more in depth level.  Hopefully this will help to look at the defense through a different perspective and the casual fan to see some of the players that are/aren't playing well while the game is progressing.

As far as week one went:  everyone was pretty much pathetic.  Tamba got good pressure, but left giant holes in the run game.  Dorsey and Gregg got steamrolled and struggled with second level blockers all game.  Jackson started getting contain in the second drive on his side when Houston wasn't, but Tyson still wasn't very good.  Houston was bad against the run, and not good in coverage...and the same goes for Sheffield.  DJ was in the right places at the right times, but his arm tackles were easily broken and led to some frustrating moments.  Jovan was inconsistent and disappeared throughout parts of the game, but didn't get to see a whole lot of the field (due to the nickel formation) for the game.

Let me know if you have any questions/need clarifications in the comments, and I'll do my best to help!  GOOOO CHIEFS!