The Losses Of Yesterday And The Chiefs Of Tomorrow.

Share All sharing options for: The Losses Of Yesterday And The Chiefs Of Tomorrow.

The losses were abundant for the red and gold during the preseason.  Even outside of the abysmal 0-4 meaningless preseason record, the Chiefs suffered more losses.  Tony Moeaki, Gabe Miller and Brandon Siler all had the opportunity to be difference makers for the Chiefs in one special area or another.  Unfortunately, that is not going to happen this year... In a bad twist of fate, they have each been loss for the season due to injury.

You can't mention Chiefs losses this preseason and not bring up Jonathan Baldwin.  While his injury isn't season ending, you can't exactly give the situation a thumbs up either.  In Sunday's match up against the Buffalo Bills, the Chiefs 2011 first round draft pick will not play. His situation has been debated and rehashed up, up, down, down, left, right, left, right, B, A, B, A, select, start already, so there is no point in getting into that at this time. What you need to know is that he broke his thumb in a mysterious altercation with Thomas Jones that we will never know the truth about until their autobiographies are published.

The overall confidence of Chiefs fans appears to have plummeted since the start of training camp (check the September approval polls, Haley 72%, Pioli 78%.)  It all started with the team cutting fan favorite Brian Waters (now a Patriot) and has inched forward with each preseason loss and every question about Kansas City's approach to this offseason. Whether it is starters playing time, Bill Muir calling the plays, Matt Cassel's ribs, the absence of a veteran backup quarterback, it has all been questioned by the Kansas City Chiefs fans. 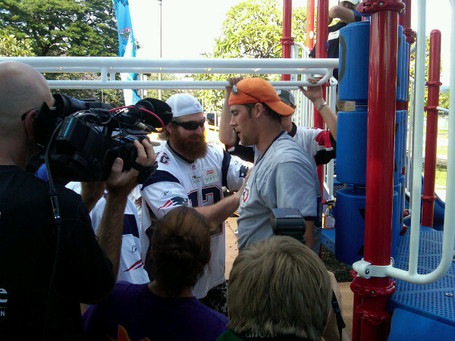 Matt Cassel, right now he is listed as probable for the game. Though I believe he will come in and do his thing and the Chiefs will win this game.  Ribs, or no ribs the Chiefs don't need that much out of Matt Cassel to beat the Bills.  In last years match up Matt Cassel had these numbers:

Those numbers were pretty pedestrian, and even with the injured ribs I think that Matt Cassel can easily duplicate or better that performance in the season opener.  Will it be enough?

That is a tough question, last season Matt Cassel had a lot of help from Jamaal Charles and Tony Moeaki. Look at the numbers:

Sure, Tony Moeaki's numbers weren't that high in the game, but he came through in the overtime clutch.  Read this article that I wrote last year about the game.

Matt Cassel gets the ball, I am screaming don't pass it, don't pass it, but they do anyway and I am glad they did because Tony Gonzalez, err... I mean Tony Moeaki is clutch. Combine him with the other hero of the day Jamaal Charles (the man is a beast) and the Chiefs are in field goal range.

Seconds winding on the clock, I am praying for them to stop it (I don't want a stupid tie). Matt Cassel runs up and spikes the pull with a few ticks left. Out comes Ryan Succop again, you can tell that last miss is still fresh on his mind. My heart is ready to explode, he lines up, here is the snap... it is good. That is the ball game Buffalo, thanks for coming out.

First off, the obvious thing is that Tony Moeaki will not be around to be a hero in this game.  We all knew that Tony came with some injury warnings coming out of the University of Iowa, but seeing the guy go down for the year is a hard to pill to swallow.  He was a do-it-all tight end that had a fantastic rookie campaign and he will be sorely missed all over the field. It is a shame.

The less obvious thing is Jamaal Charles.  In the wake of this miserable Chiefs preseason, I think his skills have been forgotten by the Chiefs faithful.  It is easy to forget that Charles is capable of getting 238 yards on 26 touches against the Buffalo Bills.  He is an amazing athlete, and he sounds like he is going to try and take charge this season and become a leader.  Read his words, I believe the guy:

Another overlooked factor is Dwayne Bowe.  At times last season he was absolutely dynamic, he is a wild card, will he come out against Buffalo swinging? Or will he have another 3 reception, 16 yard performance (granted one of those was apart of his 15 TDs last season.)  It is really hard to say what his impact will be, but I think Matt Cassel will go to Dwayne Bowe early and often in this game.  Especially with no Tony Moeaki as his check down... that is not necessarily a good thing, as one of Matt Cassel's weaknesses is staring down his primary receiver throughout his drop. For Dwayne Bowe, I don't think this will matter. He seems focused and ready to play for a huge contract this season. Bowe has never had more than 49 yards in a season opener, but he has scored two touchdowns in his four tries.

The Chiefs are going to give the Bills something completely different this season, and his name is Dexter McCluster. The Bills were the first team the Chiefs faced last season with out McCluster on the field and you could tell that it messed up their offensive rhythm not having him out there.  While the Chiefs are losing the play making ability of TOMO, they are going to go into this game with that added Dex-Factor.  Will he make an impact?  I think so, don't forget what he did in the home opener last season on Monday Night Football:

Dexter McCluster, playing his first National Football League game, brought back the punt 94 yards for a second-quarter touchdown that made it 21-7, Kansas City Chiefs. Stunning. The Chargers had never seen anything quite like it.

Not at old Arrowhead Stadium. Not at New Arrowhead. Nowhere.
Nobody has ever brought one back that far against the Chargers.

It is not all rainbows and lollipops.  The Chiefs have some weaknesses going into this football game and all of the optimism in the world will not hide them from plain sight.

They are going to have to avoid getting penalties, sure it was the preseason, but every time the Chiefs did anything good it seemed to be negated by a costly holding penalty on the offensive line.  This sort of thing will not fly in the regular season and the Chiefs have to play smarter.  Kansas City only average 5.6 penalties per game in 2010, good for 11th best in the NFL.  That trend will need to continue and improve for the Chiefs to have a realistic chance against the rest of the league.  This team can't afford to beat itself.

The same thing goes with turnovers, in the preseason the Chiefs lost the ball a bunch. The only comforting thing is that through 16 games last season, the team only lost the ball 14 times.  That stat is good for 5th in the NFL, so there isn't really a severe cause to believe that this team will forget how to secure the football.  However, if this team struggles with turnovers and keeps getting mindless penalties starting with Buffalo tomorrow.  Then they will lose football games.

Personally, I think it will be a continuation of the downward spiral the Chiefs fans have been in as of late.  People will predict 5-11 seasons, and fans will jump off the bandwagon in order to climb aboard the Chiefs need to position themselves to draft Andrew Luck next season bandwagon (Never mind the fact that it will be easier to trade up in 2012 with the new rookie wage scale in place without damming the season.)

It will be a brutal loss, and one that will probably leave optimistic fans scratching their heads.  They might wonder about Todd Haley's methods this offseason, question Scott Pioli and a few might even start up the fire the head coach websites.

Sure the Chiefs were 10-6 last season and won the AFC West Divisional crown, but Kansas City fans will dive off the cliff head first if they think the losing is going to start again.  If the Chiefs lose, it could get ugly really fast around here.

The birds will sing, little kids will smile, pets won't be hiding from their abusive owners.  Massive amounts of happiness fuel will be consumed in the Midwest and all will be right with the world.  The preseason debacle will be mostly forgiven and fans might just start declaring the Kansas City Chiefs Super Bowl champions again.

It is amusing to think of the dramatics that will be caused by this one September 11th football game.  When the Chiefs win they will be revered by all.  If they win big, then some fans might just act like they were never even concerned in the least.  After all, it was just the preseason and injuries happen every year, to every team.

I believe that the Chiefs are going to surprise everyone.  They are going to come out prepared, focused and ready to play.  The crowd will get the team energized and Todd Haley and Bill Muir will unleash an exciting new brand of Chiefs offense on Buffalo Bills.

In the end we could see a Chiefs team that we all wanted to see in the preseason.  A team that commits few penalties and plays mistake free football.  The play makers will remind us that they didn't forget how to play football during the lockout and Javier Arenas should be electric now that he is back on returns again.

The biggest thing that I see for tomorrow is that this defense is going to be all over the Bills.  Tamba Hali will unleash hell on Ryan Fitzpatrick and Romeo Crennel will prove why he is considered one of the best defensive coordinators in the NFL.  This Chiefs defense is on the doorstep of being elite and Kelly Gregg will show how much having solid nose tackle play matters when the games are real.

The Chiefs offense will be exciting, but the defense led by Eric Berry is going to win this game.

Overall prediction for the season.

This is a special team in Kansas City and they have a very difficult difficult schedule.  I am aware of that, but I think the Chiefs have all of the pieces in place and I am predicting success on all fronts.  Since tomorrow is the start of the regular season, I am running out of time to make my prediction.

So without further ado and with my last minute blinders on, I see the Chiefs going 11-5 and bringing the Lombardi Trophy to Kansas City when they win the Super Bowl.  Go Chiefs!