Now The Denver Broncos Are Starting To Get It

Share All sharing options for: Now The Denver Broncos Are Starting To Get It

The Denver Broncos have changed the name of their stadium -- again -- from some corporate company to another corporate company. Their stadium's name is now Sports Authority, switching from Invesco Field. (Let's hope Sports Authority, you know, stays in business, unlike Invesco. Update: Invesco, apparently, is still a business. Their PR group took the time to email me that, as well as their profits last year, for some odd reason.)

I think our friend Patrick Allen said it best: "The Denver Broncos sell off the naming rights of their stadium like a pawnshop owner sells off grandma's pearls."

Anyway, the new Sports Authority sign at Broncos stadium has a nice color to it -- red. Or, as we like to call it, Arrowhead Red. 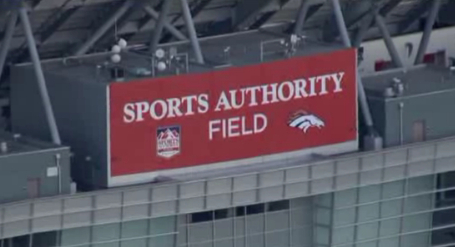 The color of the sign, and the lack of any reference to the traditional name of Mile High, has a few Broncos fans upset.

"I just think it's kinda ridiculous that it's red," said one fan. Another fan was "a little disappointed it's the Chiefs colors."

The Arrowhead Red sign has now been removed. Maybe a red and yellow sign would be an improvement.