Like RB Jamaal Charles, Todd Haley said he scouted and wanted to draft FB Le'Ron McClain when he was with the Arizona Cardinals. The Kansas City Chiefs head coach talked on Thursday about the addition of McClain and made one noteworthy point -- he's a fullback first.

"I think he's a big, physical fullback, who's obviously in the past has shown really good run ability in the year when he had a chance to carry the ball when they had an injury," Haley said at Thursday's press conference, via KCChiefs.com. "With that being said, he's very clear, we're very clear, he's coming in to be our fullback, first and foremost."

There's a reason Haley said that specifically. Why is it significant to note that your fullback is a fullback and not a running back?

Because in Baltimore McClain did some campaigning for running back. Via McClain's official site: 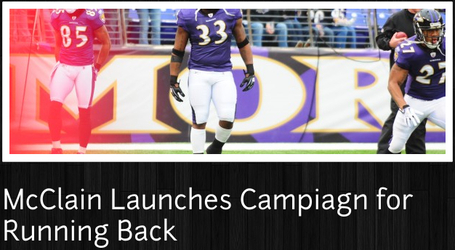 (Note: Find the misspelled word in there.)

McClain can put away his campaign material -- for a year at least -- because he's a fullback in KC.