Relax Or Get Fired Up?

Share All sharing options for: Relax Or Get Fired Up?

That appears to be the question amongst Kansas City Chiefs fans. If you have never visited a game day thread on Arrowhead Pride before, I would politely suggest that you make it happen.  It is truly a sight to behold.  Fans go through an array of emotions that is reminiscent of those smiley charts they put up in elementary schools, used to teach children about their feelings.

Last night I witnessed several discussions about how terrible the Chiefs are going to be this season.  On the other side of things, several fans tried to talk people down from the ledge (oh noes.)  Here is something you may not know about the average Chiefs fan:

The preseason argument was thrown out a lot, some fans went a step further throwing out the trusty 2008 Detroit Lions 4-0 preseason record.  You know, the same record they had when they finished the regular season 0-16.  It is a good argument, but truthfully, it doesn't matter.

If you are trying to convince fans that Todd Haley simply doesn't have a huge desire to win in the preseason.  You only have to point out his 1-10 preseason record.  Other fans will tell you it isn't about wins.  They just think that Matt Cassel and the Chiefs look ill-prepared, awful, and that it will probably carry over into the regular season.

Could they be right? 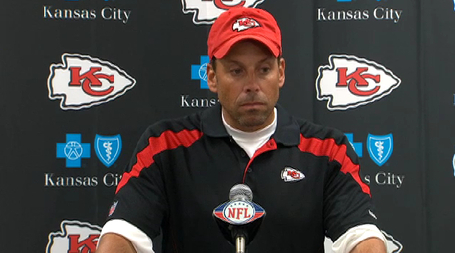 Of course they could be right.  Last year it could have been a mirage when Matt Cassel was added onto the Pro Bowl team for having a solid season.  The Chiefs 10-6 record and AFC West title could have been a scheduling fluke that was gift wrapped and handed to them by the San Diego Chargers hideous special teams unit.

We are all watching the same games, with the same players, doing the same things.  Yet, it is amazing how differently fans interpret the outcome.  Logically speaking, it is easy to look at these past few preseason games and just throw your arms up in the air and say, the Kansas City Chiefs are going to be horrible in 2011.   After all, in the three games the Chiefs have looked bad.  As an optimistic fan, I really have to dig deep to tell you why this team will be successful, especially if I am only using the preseason as my guide.

That is the difference though.  I don't really view the preseason as a navigational guide to the success of this team.  If you do that, then the preseason will fool you.  Just ask Bobby Sippio and Casey Printers if you don't believe me.  The preseason is a time for camp warriors and borderline arena league players to shine in the sun.  It is also a time to for teams to evaluate their rosters, make cuts, and that is exactly what is going to happen in Kansas City.

The Chiefs are going to tear apart this game film from the last three Friday's, and drop the "Jackie Battle Axe" down on a few of these players that don't need to make this team.  Who needs to go, and who needs to stay?  Those are my concerns and what I am worried about with this team.

These Chiefs could be bad, the starters didn't all perform well and they should be in decent shape by now... right? Matt Cassel's targets should be deadly accurate by now and his feet more nimble in the backfield to avoid the pass rush (especially with those Jim Zorn drills.) Otherwise there is no way he will be ready by the start of the season... correct?  The offensive line isn't pass blocking well at all, and there is just not enough time to get them better by the beginning of the season.  Even when the line starts playing a more sophisticated scheme, they will still be bumbling penalty champions... true?

Perhaps all of those things are accurate.  However, I tend to think that it is matter of scheme and base play that is making the Chiefs look like they have made no progress.  This is simply not the team that we watched last year, and I don't think that is because the Chiefs have regressed.  In fact, the biggest weakness on the team in 2010 looked a lot better, and that is at nose tackle.  Does that mean the nose tackle position is fixed?  No, it is the preseason.

No, wear your emotions on your sleeves.  Just try and keep some perspective in your minds about what you are witnessing, the type of coach the Chiefs have and what his preseason record is.  It is hard to watch the Chiefs play bad football at Arrowhead against the St. Louis Rams, watching them run around the field like "Yakety Sax" is playing on the loud speakers and Benny Hill is on the monitor.

You are Chiefs fans (most people reading this) and you have every right to think that Matt Cassel is a bum, and that Barry Richardson should be benched immediately on another team.  It is okay for you to say the Chiefs suck and predict a 5-11 season.  If you hopped on the bandwagon because you thought the Chiefs were back after a great 2010.  Go ahead and hop off and take a wait and see approach, to wonder if this preseason is accurately portraying how good the Chiefs truly are.

Though, I will say this.  This team appears to be using the preseason to work on things they weren't good at last year:

Barry Richardson: Appears to be working on a new pass blocking style fundamentally (Not saying it is working.)

Jovan Belcher: Is being more aggressive at the point of attack.

Those type of things are effecting the success of the team, meanwhile the cutlist players are playing like chickens with their heads cut off.  It is nice way approach to the offseason, but it may not be the best winning approach for trying to obtain that preseason championship trophy.

Should you get fired up?

Of course you should.  The Chiefs are our team, and they need to play better.  We should all expect every Chief to play better and be on Todd Haley about not winning during the preseason.  Especially the fans that go watch the games live.

We should get fired up about about the Chiefs not looking like they have improved at all.  It is frustrating to watch a team that you expect to see improvement from, lollygag all over the field like a bunch of well... lollygaggers.

However, it is smart to think about the big picture when considering this teams potential success. The big picture is that this is a young improving football team with a ton of talent and excellent coaching.  The secondary that everyone is harping on is being coached by one of the greatest Chiefs in the history of the organization and a NFL Hall of Fame member, in Emmitt Thomas.  I am absolutely positive he will have these guys read to play come 9-11-11. The offensive line should improve with playcalling and scheme.  The Chiefs will most likely begin to audible and adjust to what the defense is doing in the regular season.  The defense should adjust to what the offense is doing instead of staying in the base formation.  This will make a huge difference.

One more thing to get fired up about is that Jamaal Charles hasn't even played much (two Carries last night.)  Once he touches the ball consistently the Chiefs will be in the endzone often.  He will open up the passing game once he starts ripping off big runs and getting first downs.

So yeah, get fired up, angry, mad, be an idiot like Texas Chief.  Just remember when the bell sounds for the regular season, this is going to be great football team.  When the preseason is over, you will see the real Chiefs against Buffalo and you will come away impressed.  There is no doubt in my mind about that.