Have The Chiefs Given Us Anything To Get Excited About?

Share All sharing options for: Have The Chiefs Given Us Anything To Get Excited About?

The NFL season is upon us.  In Kansas City, our beloved Chiefs have two preseason games in the books. Who is excited for the regular season to start? Have the Chiefs given you anything to get excited about so far?

It depends on who you ask, and what their individual perception of the preseason may be when it comes to the latter question.  To me, I think the first question overrules the second question.  No offense to the Governor's Cup at Arrowhead Stadium, or the Chiefs match-up against the defending world champions in historic Lambeau Field, but the rest of the preseason holds absolutely no bearing over what happens come September 11th, 2011.

Sure, there could be injuries and these games will help determine who makes the Kansas City Chiefs final roster. This is simply not the team we will see on the field come time for Tyler Thigpen to potentially make his presence felt at Arrowhead once again.  Not even close.

While the Chiefs let loose a little bit against the Ravens by actually letting the starters see the field, the play calling was so fundamentally vanilla that you could literally tip your TV and make milkshakes with the drippings. Now that my lockout hangover for the NFL is complete, I am ready for some real football.  I don't expect to see Matt Cassel airing it out to Steve Breaston Friday night, or a double reverse to Dexter McCluster for a touchdown on the first play of the game in Lambeau.  All of that trickery and other crafty football shenanigans will be saved for Chan Gailey and "The Fighting Thigbones" on September 11th, 2011.

Yet still, fans want to know what the Chiefs have given us to get excited about... 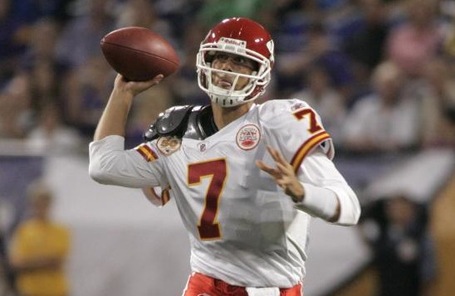 Has he been exciting? No, not unless you think throwing zero passes against Tampa Bay is exciting.  Or if you think him staring down Dwayne Bowe is anything more then we've seen from the Chiefs QB last year.  To me, Cassel didn't look any better or worse than he did last season and Jim Zorn needs to teach him to progress through his reads at a faster pace.

However, that can be a good thing.  Cassel played very well last season at times, and the Chiefs have a ton of weapons for this season.  That first pass to Bowe against the Ravens was a thing of beauty, Jimmy Smith was all over Bowe and Matt Cassel put it right where it needed to be.  To be fair, Cassel threw some duds as well. This leads me to the conclusion that he's still the same guy, and that is all the Chiefs need him to be.

In his one game throwing the ball, he has a QB rating of 59.5, which is not exactly baller status, though he showed some signs that he could do what needs to be done come game time.

The rushing attack is obviously the strength of this team, and Thomas Jones, Le'Ron McClain and Dexter McCluster did nothing to make me think that was going to change in 2011.

In fact, I think that McCluster will make the Chiefs attack even better this season. I have never been on the side that thinks that McCluster is a wasted draft pick.  When healthy, McCluster is a dynamic playmaker, and he put that on display against the Ravens once again.  In this meaningless preseason the Dex-Factor has averaged five yards per carry and 15.7 yards per catch.

This season I am looking forward to seeing two-back sets with Charles and McCluster. While I don't think McCluster should be in the backfield blocking for Cassel, he is a perfect weapon for screens off the play action to Jamaal Charles and various trick plays.

To me, the Jonathan Baldwin situation is no big deal, it has been blown way out of proportion. Bowe is in a contract year and he just witnessed the Cardinals give Larry Fitzgerald the keys to Fort Knox for eight seasons.  Bowe will never be more motivated and driven to play better. Add Steve Breaston and Tony Moeaki to that mix and the receivers will be fine.

Depending on how he heals, I believe Jonathan Baldwin will still make an impact this year.  That was thing with Baldwin, he could always be a decoy for defenses the Chiefs face this season with potential benefits. One that couldn't be ignored by defensive coordinators, he is just too big and fast to not let his presence be felt.  Even if he isn't 100 percent, that doesn't go away completely. Teams will not be able to double team Bowe with him out there as a touchdown threat on every play. The guy makes one handed catches look easy, a thumb/wrist/hand... head/shoulders/knees and toes injury isn't going to completely debilitate him for the whole season.  Even if they have him run go routes on every passing play, he still stretches the defense out.

Mainly, I just want to see the Kansas City Chiefs passing attack quicken its pace this season, which is a matter of scheme and route design.  It would be nice to see the receivers make their breaks with more urgency, especially if the line can't hold up against the pass rush.  The Chiefs need to get the ball out of Cassel's hand faster, with plays designed to go to the tight end and second and third receivers as the first read.  Spreading the ball around is essential to the Chiefs success the season.  It can't be strictly the Bowe Show for the Chiefs to win against their tough schedule.

This passing attack has the potential to be exciting, but I don't think we will see anything in the upcoming games to comfort Kansas City Chiefs fans that are on the fence about this subject.  Though it is very difficult to eyeball this offense and not dream big, we just won't see them execute anything until the regular season.

The Defense is going to be good.  I re-watched the Ravens game a few times and NT Kelly Gregg gets consistent push and flows to the ball carrier easily breaking away from blocks.  The same thing can be said about Jerrell Powe. He has good natural instincts as a nose tackle, big man quickness and seems to have a burning desire. This will go down as one of the best sixth round picks in Chiefs history.

The Front Three with Glenn Dorsey, Kelly Gregg, and Tyson Jackson looked good.  They did their jobs and it seems like the Chiefs will be much improved against the run.  I can't wait to see how this defense looks once Romeo Crennel gets out of his preseason form and unleashes "The Master Chief" Tamba Hali on Buffalo.  It seems they are using the preseason to tweak the rest of Tamba's game in his limited time on the field.

Eric Berry is still special.  Tackling, covering, and fixing other Chiefly mistakes is what "The Incredible One" does, and he does it very well. As long as Berry is roaming the defensive backfield, the Kansas City Chiefs will have on of the best defenses in the league for a long time.

Justin Houston is going to be a great player. Everyone was flipping out about his contract situation but despite that, he is exactly what he was in college, an athletic freak with a speed rush and a nose for the quarterback. After the draft, I made a prediction that Justin Houston would finish in the running for defensive rookie of the year... That might not be too far off.  One thing is for sure, with the Chiefs pass rush in 2011, quarterbacks are going to be running for their lives.

In Kansas City, the potential is there for the Chiefs to have a special team this season.  Todd Haley doesn't give us a whole lot to get excited about in the preseason with his seemingly nonchalant approach to the games. Whether or not that method is effective going into the season is debatable and has been discussed ad nauseam.

On my end, I am not worried about it at all. After witnessing Todd Haley lead the Chiefs since 2009, it is obvious to me that he will have this team ready to play.  You simply have to look past the vanilla and use your imagination to feel the excitement about this team.  That is a lot to ask for out of the Chiefs faithful, but this is going to big season.  The Chiefs have a lot of great weapons, excellent coaching and they are defending the AFC West crown.  It is not difficult for me to get excited about this team.

Think about how the Chiefs burst out the starting gates to 3-0 last season after a disappointing 1-3 preseason showing were they only scored 62 points in four games.  Did those preseason games matter?

In my delusions, I believe that the Chiefs can play for and win the Super Bowl this Season.  The Chiefs have a difficult schedule this season, but even with that challenge, the brass said that the Super Bowl is still the goal in a recent Q & A session with the season ticket holders that is available from the mothership:

"It’s one of the most challenging schedules in the league, but if you want to go where we want to go – which is to the Super Bowl – you have to be able to beat those teams," Clark Hunt said. "We’re going to find out early and often whether we’re capable of doing that and that’s ok with me."

Scott Pioli added, "There’s the saying that if you want to be the best, you have to beat the best. So, here we go…"