Check Us Out On TV Tonight Talking Chiefs

Share All sharing options for: Check Us Out On TV Tonight Talking Chiefs 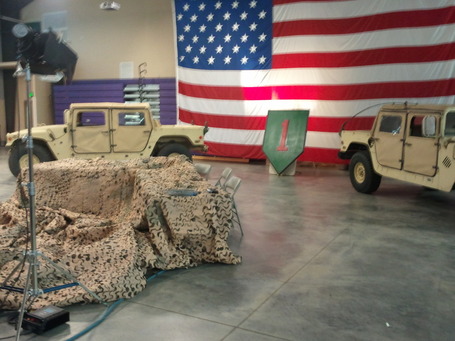 My brother, Chris, always teases me saying that I have a face for radio and not TV.
We'll find out tonight if he's correct.
I went up to Fort Riley, KS yesterday to film a TV special on the upcoming NFL season. The show, hosted by the Metro Sports crew, is called "Fantasy Huddle" and will air at 7:00 p.m. (Arrowhead Time) tonight on Time Warner Cable Metro Sports in Kansas City.
If you're out of town, you might be able to still see it. It will air in all Time Warner markets across the country so some of you outside the KC area will have an opportunity (opportunity?) to see my mug on TV talking Chiefs.
It's an NFL preview show with a fantasy football focus so they touched on eight teams in Time Warner markets, including a segment on the Chiefs.
In the Chiefs segment, we talked about the fantasy prospects of guys like QB Matt Cassel, the Chiefs running backs and receivers. We also offered up our surprise fantasy football player of the year but you'll have to watch the show to find out who I picked. (We call that a teaser in the TV business, which is something I learned for the few hours I was, you know, actually in the TV business.) I also gave my season prediction for the Chiefs, which has already changed a couple of times.
The show was really, really well done and I'm not just saying that. (If I didn't think the show went well, I probably wouldn't be promoting it.) It was shot on the military base with soldiers in the audience and a pair of Humvees behind us, as the picture above shows. The soldiers were into it, hootin' at the things they liked and hollering at the things they didn't (like when I apologized to the Chris Johnson fans in the crowd before saying Jamaal Charles may be the best running back in football).
The hosts, Herbie Teope, Chris Gough and Dave Neilson, were awesome to work with. Herbie, in particular, was great in helping me get rid of the "You knows" when I talk publicly. I'm told I made major strides.
Check it out tonight. Should be cool...