Share All sharing options for: Ramblings of an Idiot: Chicken Little Edition

"The sky is falling! The sky is falling!", said the little chicken from the children's story. And if you've been keeping up with the comments and posts around the league in the last few day you'll notice a similar trend among Chiefs fans. No matter who KC talks to, or how many players they sign, or what moves they make to improve the team, some people are going to continue to cry out that Pioli is sitting on his hands while the sky falls around the team.

The goal of every team is to win the Super Bowl, but the first step in that process is to earn a spot in the playoffs. Because the division leader gets a guaranteed ticket to the tournament the first goal of every NFL squad has to be winning their own division. So when we talk about which teams have or have not made any moves to improve in the off season it's best to look at what other teams in our division have done in comparison to the Chiefs. After the jump you'll find a basic breakdown compiled from the transactions team pages over at Foxsports.com. 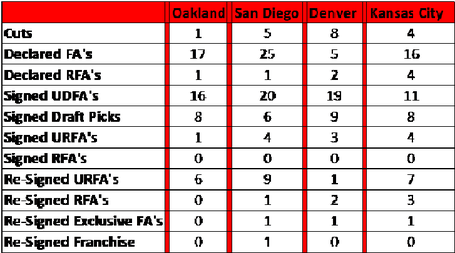 (First let me say, What the hell happened to the 'table building tool' for posts? I'll admit that it was hard to use, and a massive pain in the ascot to set up without two or three do-overs, but it was better than nothing.)

So there it is in black and white. The Chiefs didn't sign as many undrafted players as the rest of the division, but that's about the only place where the team has lagged behind. They didn't cut as many players as Denver or San Diego, and they didn't put as many of their own players out on the market as UFA as Oakland or the Chargers. That means that the Chiefs didn't put as many of their own players 'at risk' of being lost. They appear to like the young nucleus of the team, and aren't ready to throw the baby out with the bath water.

Kansas City is tied with the Chargers for the most re-signings of URFA's and RFA's at ten, while Denver sits at 3 and the Raiders at 6. We still haven't seen Brandon Carr sign his tender yet, and I fully expect him to sign with a 2nd round tender hanging over his head. In the near future the Chiefs will be the proud leaders in keeping more of their own talent than anyone in the division. For a team that won the division crown and a playoff berth last season that seems like a smart move.

"But...But.... where are all the blockbuster NEW free agents? Scott isn't doing anything to improve the team and bring in players," said Chicken Little. Take another look at the chart. The Chiefs are tied for the division lead in the categories of adding new RFA's and URFA's as well. Granted, it's only 4 players, but Steve Breaston is a legit starting slot receiver and no one is complaining about the team adding a true zero technique nose tackle to the roster. If you want to see a team that isn't doing much about adding new talent to the club look no further than Oakland who have added a grand total of 1 new RFA or URFA while declaring 18 players FA's and re-signing only 6 of them to their sinking team. 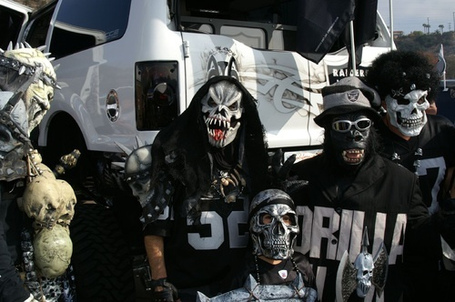 Nice Costumes! Is Your Team Planning On Keeping ANY Players For 2011?

(Aren't you just licking your chops waiting for Miller and Bush to leave the Raiders for a team that actually wants to win? With Scrabble gone they have lost the best player on their team. And with Huff re-signed, they are grabbing on to one of the worst starting safeties in the league. Seriously....they resigned Huff! That shouldn't even count as one of their 6.)

I would venture to guess that new contracts for Flowers, Hali, and maybe Albert are being discussed as a method to spend the money the Chiefs have laying around the office under the minimum salary floor. Locking up our current talented starters on long term deals is a lot more important than getting a shiny new toy of a player. We already know how our guys are going to respond to the city, coaches, and the program; And after last season Chiefs fans can be sure that the team has bought in to the teams philosophy. We won't be able to say that about players we bring in from other clubs, at least not yet.

Most importantly Chiefs fans should develop a little patience. Everyone panic-ed when Monday came and went without Barry Richardson signing his tender. These are the same fans that have been bitching all off season that we need a new RT. Which is it Chief-a-holic's, you want Barry on the field as the starter or you want to pull him and give someone else a shot? Waters is gone but Brian Waters had a long and fantastic history in red and gold. However, he was showing visible signs of decline. He skirted into a pro-bowl on his reputation alone. Not only am I happy to see him replaced by last years draft pick, I think we should have traded him away in Haley's first season when he still had some trade value. BW will always have a place in my heart as the last surviving member of a once dominate Chiefs front line, but those days are fond memories. You can't protect a QB with memories. We've got to have youth and talent infused into the line, and we've got just the guy in Asmough.

My advice to all the Chiefs fans reading posts on AP is to ignore the panic, discount the doom and gloom, and look at reality. The Chiefs are doing more to improve their team than anyone else in the division. They won the division last year, which means they are just pulling ahead further. And remember, the off season isn't over yet. There may be more moves to come. If there aren't, be sure to look up and let that nut falling from the tree put your eye out before you start screaming about the sky falling in Kansas City.