Underestimate The 2011 Kansas City Chiefs At Your Own Peril

Share All sharing options for: Underestimate The 2011 Kansas City Chiefs At Your Own Peril

Underestimation (hey MNChiefsfan started this word-making-up stuff:) is an interesting dynamic.  It was at least part of what allowed these two to act the fool and pose for a picture.  It continues to stand the test of time during this colossal undertaking the Chiefs have engaged in known as rebuilding an NFL franchise.  It can be argued (probably successfully) that this rebuild really began with Herm's 2006 draft.  That means that this has been going on now for five solid years and is heading into it's sixth season.

The thing to remember here is that this juxtapositioning has been picking up speed with each passing year and each change in the landscape.  During this time, the Chiefs have turned over nearly an entire franchise.  Think about it.  How many players are still here from the 2006 team?  Waters and DJ come to mind quickly.  Tamba was a rookie in '06, we also had Ron Edwards and Dustin Colquit on board.  Casey Wiegmann returned to the squad last year from a sabbatical in Denver.  That's about it for players.  Coaching staff?  All new. Multiple changes over those five years and still transforming this year.  GM and other management?  Changes all around.  Ownership?  A new Hunt holds the reins.  It is very hard to put a dot on the time line that represents exactly when this rebuild began because it depends on your point of view.  For me, parts of it began pre Pioli/Haley but the major transition did not begin until they arrived. Whatever point you like to use as the start, one thing about this team cannot be denied. The Chiefs are building something successful for only the third time since winning a super bowl over forty years ago. Besides Marty and Dick Vermeil, it's been a long dry spell in River City.

Todd Haley likes to break the season down into quarters to help focus the players on the task at hand.  In order for the team to be successful, Coach Haley says that they must win three out of four games each quarter.  The reasoning is that if they do indeed, get those three W's then they will finish the regular season with 12 wins and that amount nearly guarantees you a playoff spot.

How many times have the Chiefs won 12 or more games in a season since 1970?  Three.  To put this in perspective, I wanted to compare how many times other successful teams have done this.  I chose the Colts, Pats and Steelers as subject material. The Colts and Steelers have each done it eight times, and the Pats have done it 5 times since 1970.  Of these three, only the Steelers seem to have been more consistent over the years in being able to produce teams that can do this.  Their 12 win seasons have been fairly evenly scattered over that forty year period and involve three coaches.  Chuck Noll did it in '75, '78 and '79.  The chin (Cowher) did it in '94, '01 and '04.  Tomlin has now done it in '08 and '10.

The Colts have also won 12 or more games eight times since 1970, but all of these have occurred since the '99 season when Coach Jim Mora (and incidently, HOF'er Peyton Mannings second season)went 13-3.  After that it has been all Peyton all the time.  Tony Dungy is either one of the greatest underrated coaches in the History of the NFL or the luckiest.  Since Peyton took the reins in Indy,  he has presided over all eight of the Colts 12 or greater win seasons, the last being under Jim Caldwell.  To add insult to this injury (to me in particular 'cause I wanna beat this guy soooooo bad!), Peyton Manning is the author of all but one of the Colts 12 or greater victory seasons.  The only other time the Colts were able to win 12 or more games was waaaaaaaay back in 1968 under a pretty good coach named Don Shula who turned in 13 total wins for the season on the way to a Super Bowl loss to the Jets.

Then we come to the Patriots.  All five of their 12 or more win seasons belong to Belichick and Brady and all have happened since the 2003 season.  I think that more important to the Chiefs is the fact that four of these five also happened to be accumulated during Scott Pioli's time in New England.

Three teams that are today (at least) considered successful, have averaged winning 12 games a season or more, only 17.5% of the time.  I would say that Coach Haley's goal is a lofty one.  Then again, it is one that even if a team comes close to achieving, they have a legitimate shot at post season play.  That, I think, is really the ultimate goal.

The Chiefs by comparison have had only three of these 12 win seasons for a 7.5% accomplishment rate.  Marty had two 13 win seasons and Dick Vermiel had one.  Even though most would agree that Marty had a consistently solid team during his tenure, Vermeil was able to show incremental win improvement in each of his first three seasons as HC, culminating with a 13 win season in 2003.  Marty never had three consecutive seasons of improvement, but he consistently won enough games to get in the playoffs giving the general impression that he was a superior coach.  The only Chiefs coach who outdid Vermeil's three season improvement was Marv Levy.  Marv was able to show improvement in four straight seasons starting with his first in 1978.  The Chiefs improved their record every year for the next three seasons ending at 9-7.  Then came the strike shortened '82 season and Marv went 3-6, ending his opportunity to coach the Chiefs.  He went on to take the Bills to four Super Bowls, all of them losses. Maybe that '82 strike had some hidden benefits after all.

So what has all this to do with underestimation?  Well, it would seem to me that many fans and the media base their opinions (partially) on the history that a team has built.  I think Coach Haley is expecting that.  He's been part of this same equation in New York with the Jets and Arizona with the Cardinals.  The Chiefs have not been successful in projecting the spectre of a winning franchise over the last forty years.  This truth, is what I think is the basis for the media and some fans alike, to tend to down play the Chiefs in their minds when it comes to the Chiefs contending for a championship.  There is little there to point to (that isn't ancient history) to give one a reason to sing our praises.  We are still, despite the last forty years, in prove-it mode.

This year will be critical in this team's development.  The Chiefs posted a 10 win record last season after winning only six games in the entire two seasons prior to that.  That is significant.  It helps to define the speed with which this team is evolving. Combine that with the fact that we are now in year six of creating a new football team and it becomes clear that this team is well past half way to fielding the team that can and should compete with anybody in the league.  Yes, we still have a few spots to upgrade, but the 2008 Chiefs we are not.  That part of our history is thankfully behind us.

This version of the Kansas City Chiefs has all the talent that it needs to win football games on any given Sunday.  It will finally be unleashed if we do indeed have a season.  Whether or not they succeed now comes down to coaching, game planning, gamesmanship, desire and even Chiefs Will.  Don't be surprised if the Chiefs Will mantra is replaced with a different one this year.  We may not hear about it much until preseason starts, but be on the look out for it.  Most pundits and some fans are still looking at the Chiefs through glasses that are stained with the nearly impenetrable haze associated with forty years of (mostly) substandard play.  Surprise!  Those Chiefs no longer exist.

Today's Chiefs are young, talented and unified.  They are growing up fast and fast is the requirement.  When the 2011 Chiefs take the field, ask yourself this question.  How many Hall of Fame players am I watching at this moment?  I think the answer is going to surprise all of us. In order to match Dick Vermeil's three seasons of improvement, Haley and his team need to win at least 11 games this year.  If they win 12 or more, they will find their way into some rarified air.  Neither total would surprise me in the least.  Yeah, yeah, I know, we gotta play some real tough teams this year.  Don't forget though, they gotta play us too.  That's what I'm counting on.  This Chiefs team is gonna carve a hole through the 2011 season that's gonna make the damage in Joplin look like a rain storm. 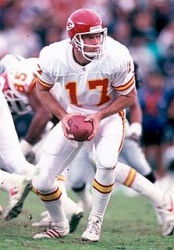 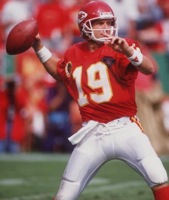 After this coming season, they're no longer going to be the only Kansas City Chiefs QBs to win playoff games since 1970. Third times the charm Matt, it's time to collect on all those years of effort waiting for your turn.

Telling the NFL that underestimating the Chiefs is at their own peril is, well, an understatement.  Go Chiefs.