When I was young, I had the most marvelous grandparents. One grandfather was a self taught TV and radio repairman. That was his business. He had a TV shop (as it was known in that oh-so small town) where he worked on the folks TVs and radios when they went on the fritz. Actually, if you remember the Fix-It shop on the Andy Griffith TV show, his place was not too far removed from that example. He also sold new TVs and Stereos when the time had come for someones squawk box to finally bite the bullet and become a pile of spare parts. I spent many an hour of my youthful summers in that shop, ostensibly working as his assistant. The truth be known, I would have done the very same thing for nothing more than the opportunity to hang out with the old man. He was, and remains, one of the most entertaining people I have ever known. He was Joe Common, but he looked at the world through eyes that refused to see despair, regardless of the circumstance. He lived through the depression and nothing about the trials and tribulations of later life could hold a candle to the difficulty he had experienced during those times.

He found the love of his life in my grandmother and as far as he was concerned, he was walking in tall cotton from that day forward. These are the roots that define who I am today and gives some of what I write it's context. The man made an impression on me without trying. That should be the definition of character. He told stories that would transfix you in your spot and make you almost interrupt him in the telling to get him to move on so you could hear the end. Almost. He was full of one liners that all related to stories that he had told us (my brother and I) and those one liners are still topics of conversation today between my brother and I, thirty plus years later. It was one of these one-liners that came to mind as the inspiration for this post.

One cold and snowy winter morning when my grandfather was getting ready to go to work, there came a knock at the front door. He got up from his bacon and eggs (this was one of his luxuries--after he established himself and times got better from those depression era days he swore that he would always have bacon and eggs for breakfast--I never saw him eat anything else) and went to see who was knocking at this early hour. The mystery was soon solved when he opened the door to reveal a young man of about 10 years named Jerry--the paper boy.

"What can I do for you Jerry?", my grandfather asked. "It's that time again sir", said Jerry. "Oh, and what time would that be?", my grandfather cajoled. "You know" said Jerry, "Time to co-wect!". My grandfather chuckled as he always did when Jerry made his monthly collections for the newspaper deliveries, because of the cute way that Jerry said co-wect. It had an Elmer Fudd quality to it and my granddad loved looney tunes cartoons. Bugs Bunny, Yosemite Sam, and Elmer Fudd were cartoon characters that were made to entertain the kids and the adults alike. You just don't see much of that anymore since all the 'violence' had to be removed from the cartoons.

Anyway, my grandfather went and got the money and gave it to the boy. "Jerry", my grandfather said, "Do you ever think about what an important service you provide to folks by bringing them the paper?" "No" said Jerry, who frankly was ready to go 'co-wect' from his next route patron, but couldn't be rude and ignore his elder. "Son, you deliver more than just the news every day, you deliver hope. Hopes are realized or dashed by nearly everyone you deliver to every day based on what's in that paper. Hope for rain, hope for prices going down, hope for stocks going up, even hope for lasagna on the Wednesday school lunch menu are all included right there in that paper that you rolled up and put a rubber band around and threw onto my stoop. I'll bet you never thought about how your delivery job was that important to so many people, did you?"

"No" said Jerry who was starting to act like a cat getting a bath. "Well, I gotta go. Thank you sir, see you next month".

"Yeah" said my grandfather, "When it's time to co-wect". 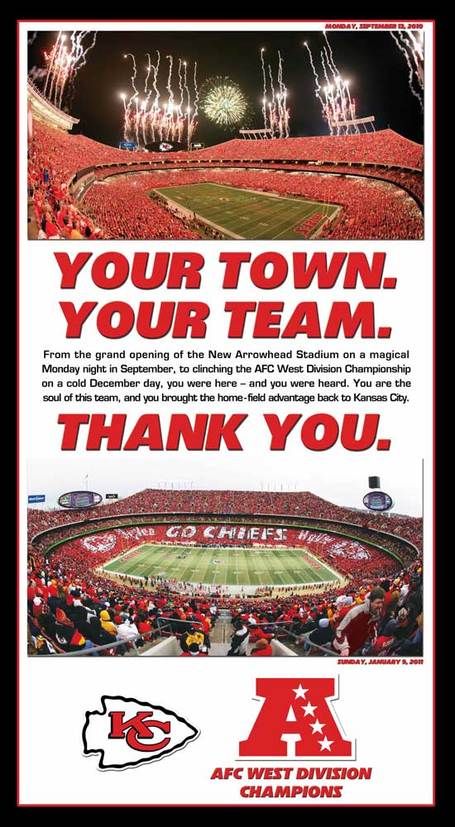 The Kansas City Chiefs job is a lot like Jerry's was. They deliver coaches and players, game plans and stadiums in an effort to provide hope for Chiefs fans. It's like a promise that the franchise makes to it's fans. It's unspoken to be sure, but for the fan, it's understood--someday (and many of us are willing to wait a long time for that someday) you will win us the championship.

My grand father (and father for that matter) bore witness to the last time that the Chiefs made good on that promise. I was among the living at the time, but far too young to fully appreciate the gravity of the situation. Mostly, over the last forty years those hopes have been dashed. Just like the farmers who were looking for rain in the paper but none was forth coming. There was always tomorrow's paper. As the years have passed, tomorrow has become harder and harder to look forward to. The fans grow restless and weary of the vigil. We are starved for even a playoff win. Joe Montana was the last to deliver on that promise to the fans. Joe was a great football player who I believe loved his time in Chief's red. Thank you Joe, for delivering on a promise that you never made, except to yourself. The absolute greatness of that is unquestionable.

Most recently, the league and the players collectively lost their minds and did everything in their power to take that hope away from the fans. Had that disaster not been averted, I'm not sure what would have befallen the sport. I'm not sure that they even understand that their job is to provide hope. More likely, they think their job is to work hard, perfect their craft and win games. That is part of their responsibility, to be sure, but delivering on the promise has not been forgotten by the fans, and it's high time that the current day Chiefs are reminded of it's existence. It's not been forgotten by the fans that spend enough money to buy a used car on season tickets. It's also not forgotten by the fan that saves $1 of each paycheck for six months to be able to buy a ticket and share the exhilaration of watching HIS team take the field as one with the rest of the Red Sea seated in the nose bleed seats. These fans are who the promise was made to and these fans are who the hope is delivered for. The fact that we have not had lasagna for lunch on Wednesday in the school cafeteria in over forty years has not been lost on these fans. The fans have held up their part of the bargain. The time is coming soon when the Chiefs need to make a deposit on their's.

So there it is Clark Hunt, Scott Pioli and Todd Haley (plus all the rest of the 2011 Kansas City Chiefs). We know you are working, planning and sweating to do your job as you see it. Winning the AFC West last year has only whetted the appetite. Given the situation, I just thought you should be made aware of the fact that there is a bit more to your job that often times goes unsaid. It goes unsaid, but it is right there below the surface and it's what keeps Chiefs fans coming back for more year after year. You have given us reason to reignite our passion. For that, I thank you. I just hope you are ready for what is next. Chiefs fans from across the fruited plain and even the world have come to a conclusion about the 2011 season. It's the same conclusion that Jerry came to all those years ago on my grandfathers stoop. It is unequivocally, gloriously, and finally...Time to Co-wect.